Was going to go up to Taos but decided to skip it. Not on Route 66 and more driving to do. Seeing some sights here and heading out to Albuquerque. Should be 71 degrees here and 83 in Albuquerque (Glad to get thru there, don’t like to spell that city name!)

Looking at Santa Fe, then on my way. 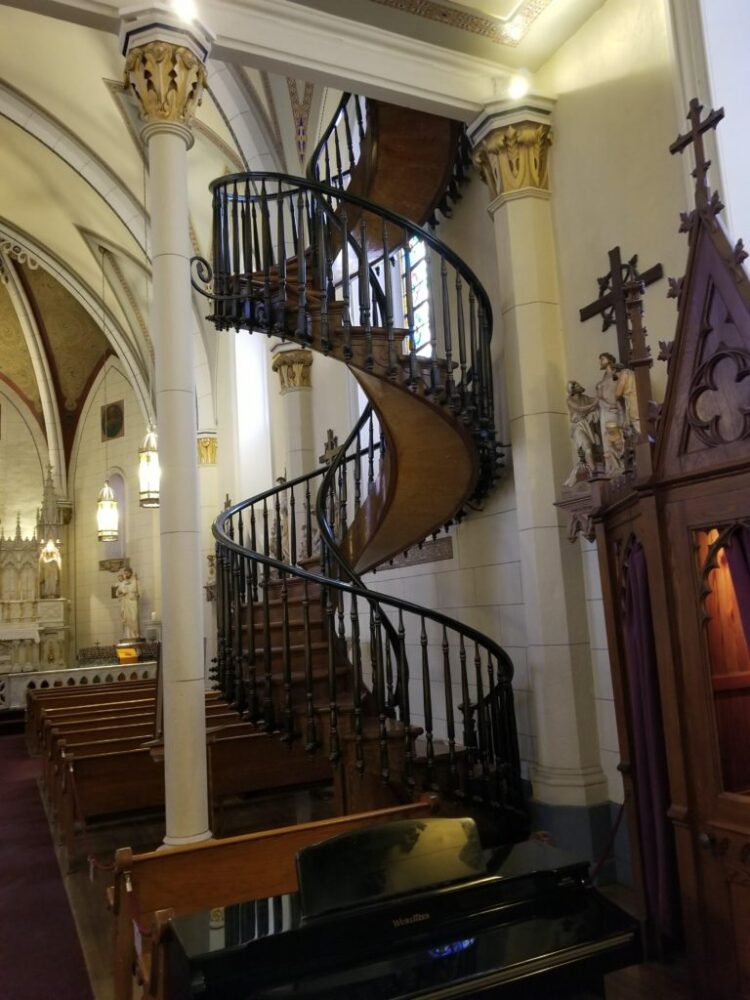 Three mysteries surround the spiral staircase in the Loretto Chapel: the identity of its builder, the type of wood used, and the physics of its construction.

When the Loretto Chapel was completed in 1878, there was no way to access the choir loft twenty-two feet above. Carpenters were called in to address the problem, but they all concluded access to the loft would have to be via ladder as a staircase would interfere with the interior space of the small Chapel.

Legend says that to find a solution to the seating problem, the Sisters of the Chapel made a novena to St. Joseph, the patron saint of carpenters. On the ninth and final day of prayer, a man appeared at the Chapel with a donkey and a toolbox looking for work. Months later, the elegant circular staircase was completed, and the carpenter disappeared without pay or thanks. After searching for the man (an ad even ran in the local newspaper) and finding no trace of him, some concluded that he was St. Joseph himself, having come in answer to the sisters’ prayers. 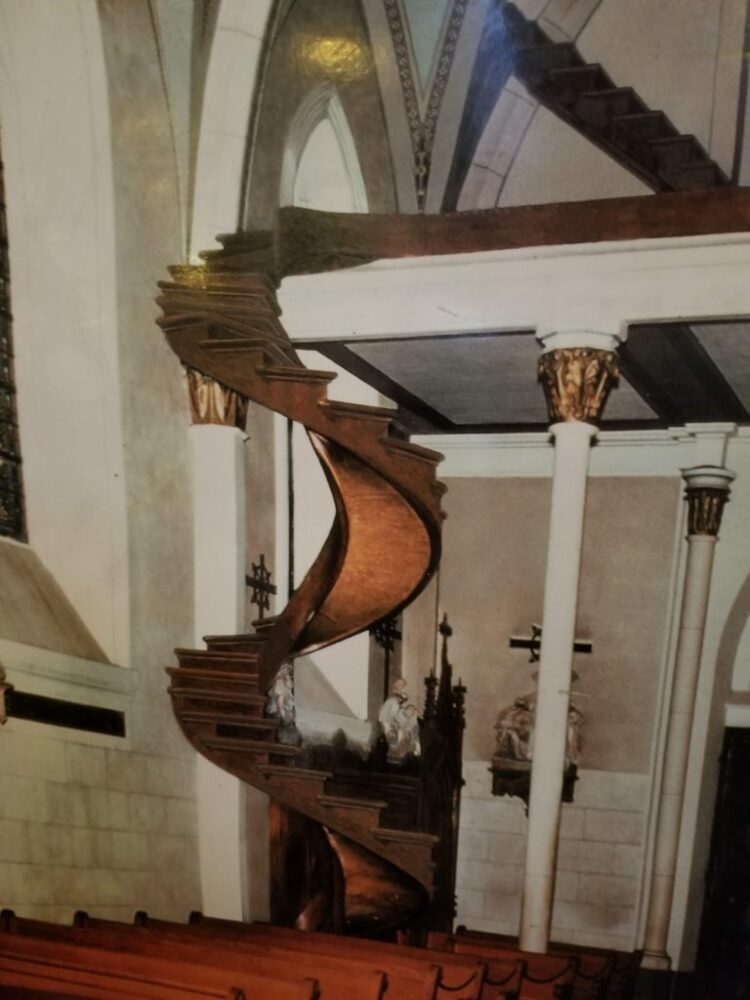 The railing was added later. This is a picture of the original.

The staircase has two 360 degree turns and no visible means of support. It is said that the staircase was built without nails—only wooden pegs.

Decided to go to Los Alamos. I had been there at the hospital many years ago installing a computer system and wanted to see it again since it was only about 30 miles away. Then back to Santa Fe, back on Route 66 and into Albuquerque for the night. So here’s “the rest of the story”. 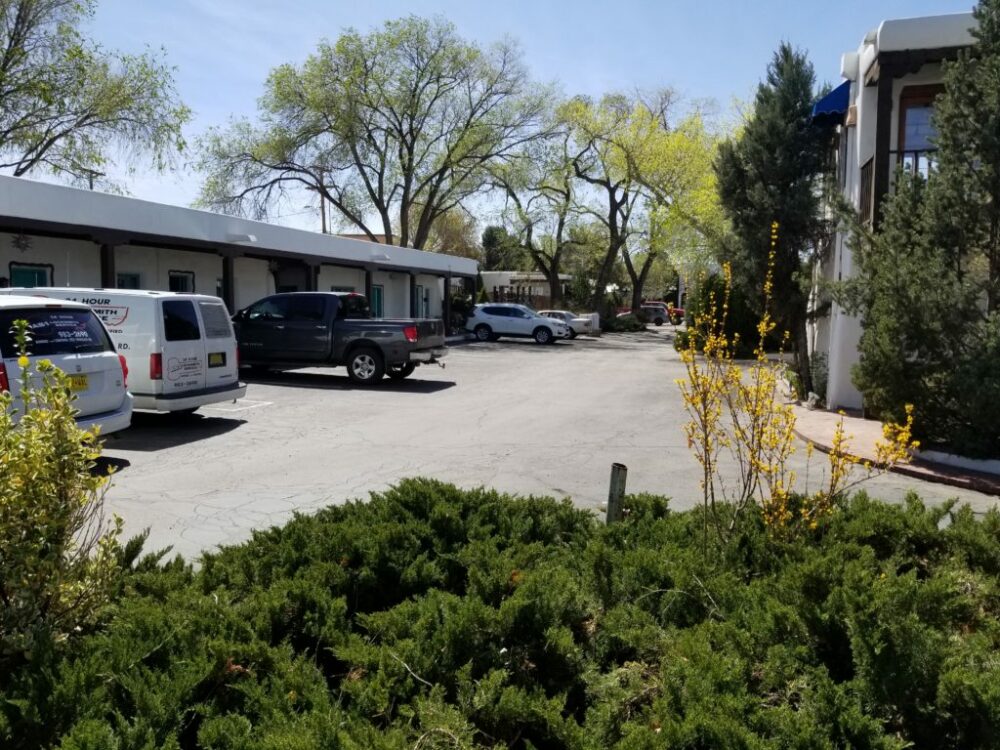 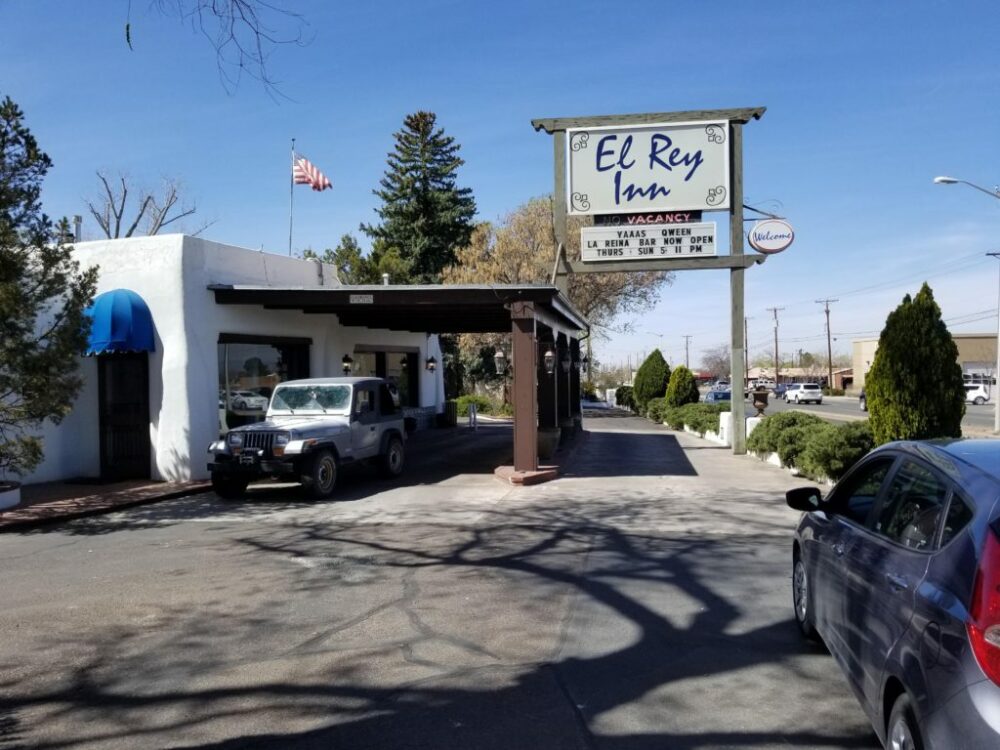 One of the old motels that has continuously operated along Route 66. 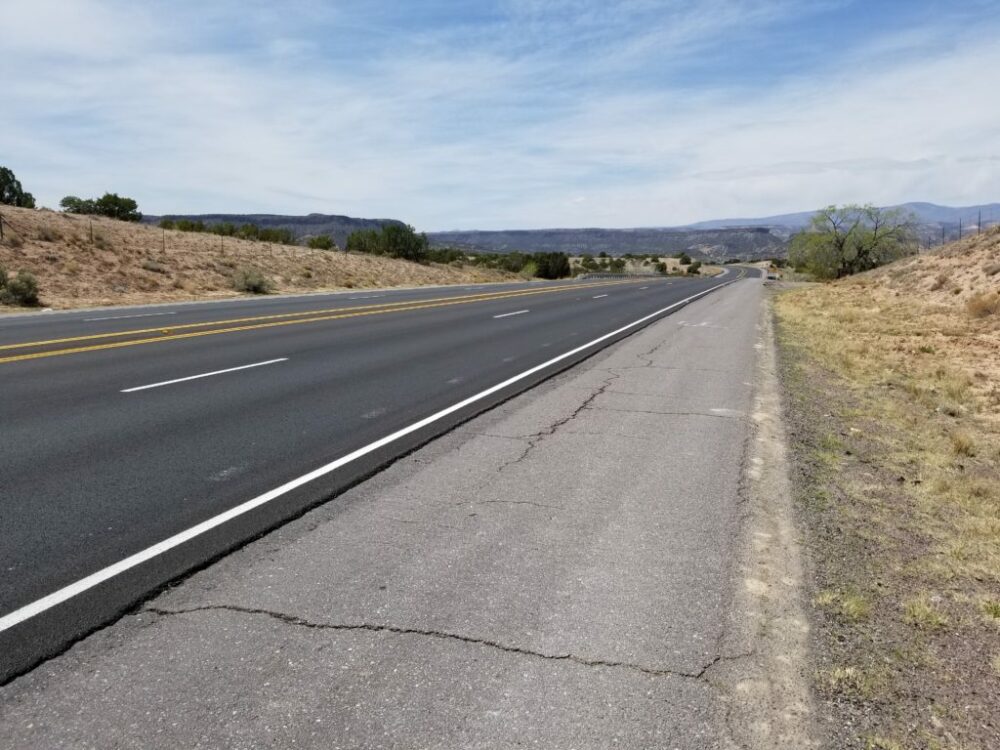 On the way to Los Alamos. Liked the picture but needs to be  cropped and made larger for the background to show. Santa Fe is 7100 ft elevation and Los Alamos is 7300. 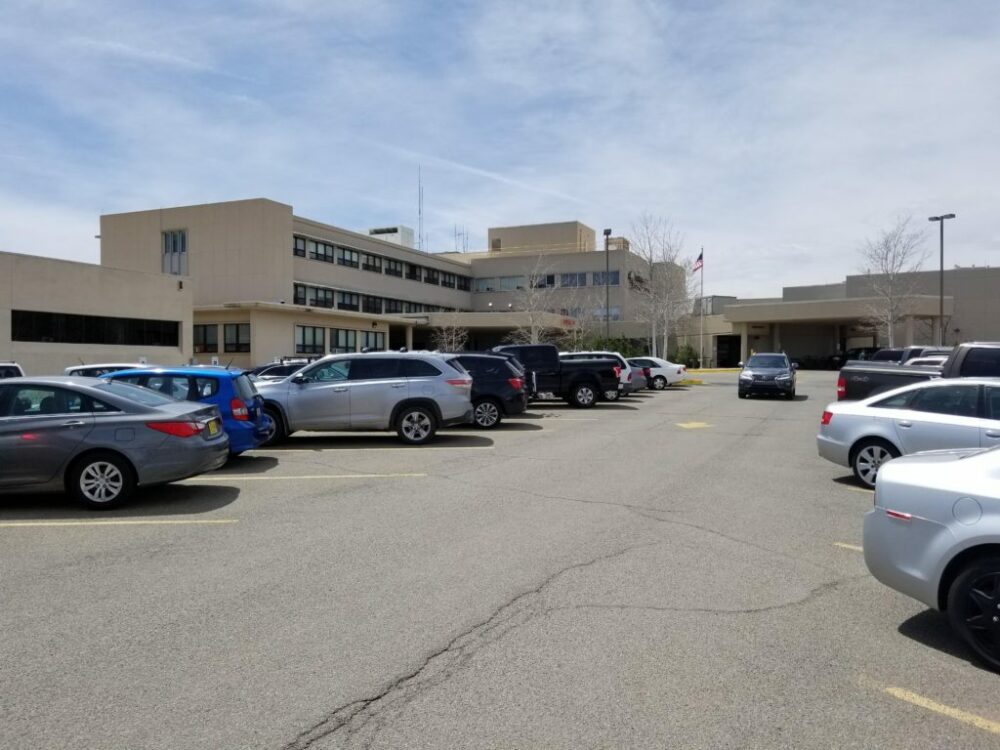 The hospital in Los Alamos. Significant to me, anyway. The larger part on the right is the building that was there when I was there (early 1980’s). (When my kids were young and the first they’d ask is “What did you bring me, Dad?) On the left is a new wing. They’ve also re-done the exterior of the original building to give it the “southwest” feel. It was a government erected building that was just concrete, from the outside more of an eyesore than anything. 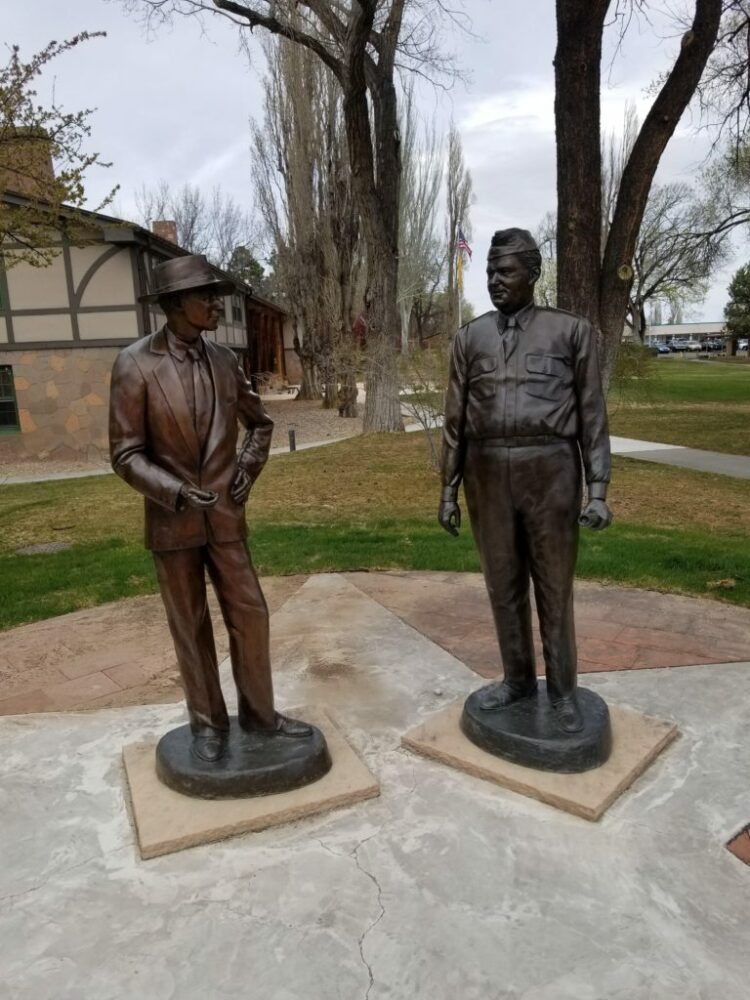 Statues of J. Robert Oppenheimer, head of the Manhattan Project, and Gen. Leslie Groves, head of all the construction and logistics to make the place run. 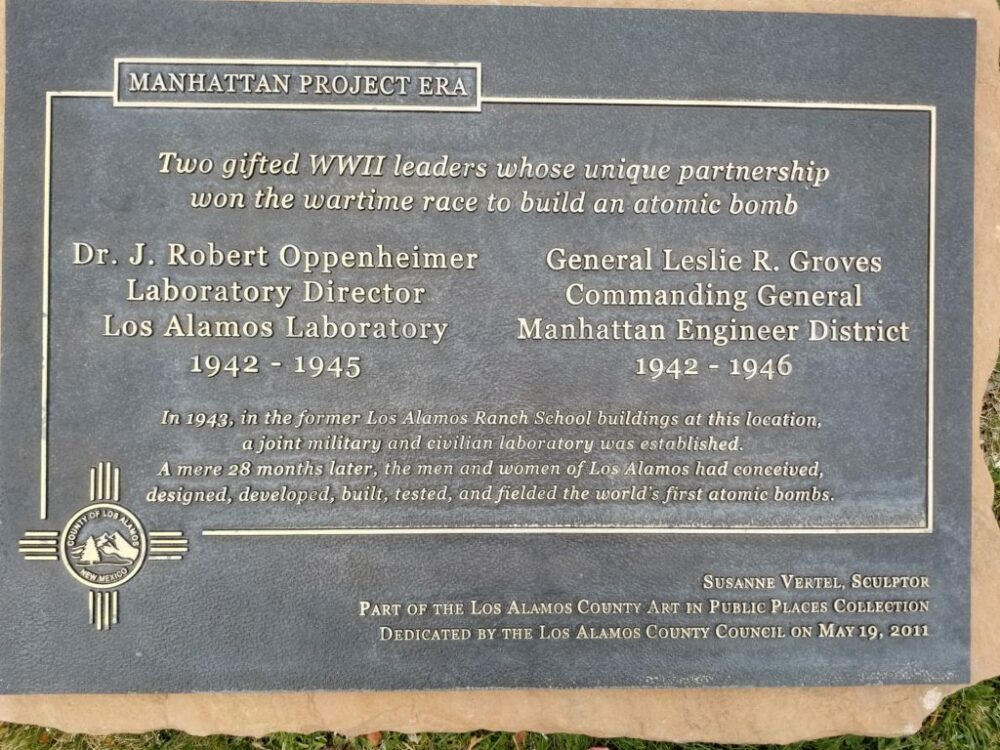 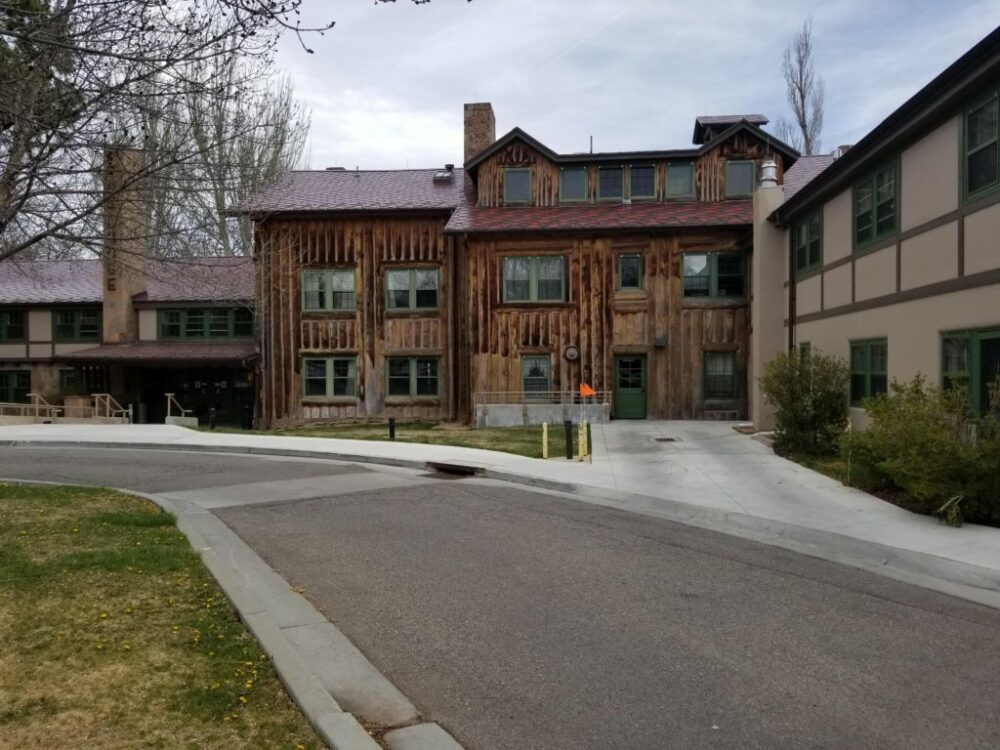 Fuller Hall. Oppenheimer was from an upper class family and this place was an exclusive summer camp for boys back when he was young. The weapon developers needed a place the could be secured as much as possible and Oppenheimer thought of Los Alamos and it became the place where much of the work was done. 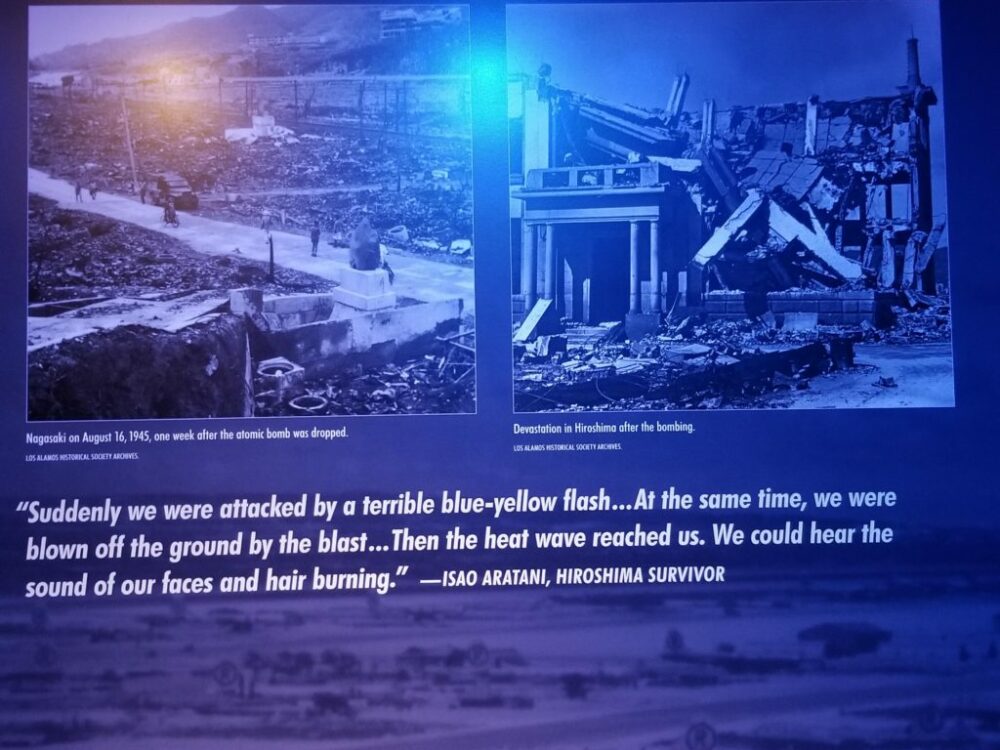 Question still not answered. “Should the US have dropped the bomb?” That has been debated since that day. 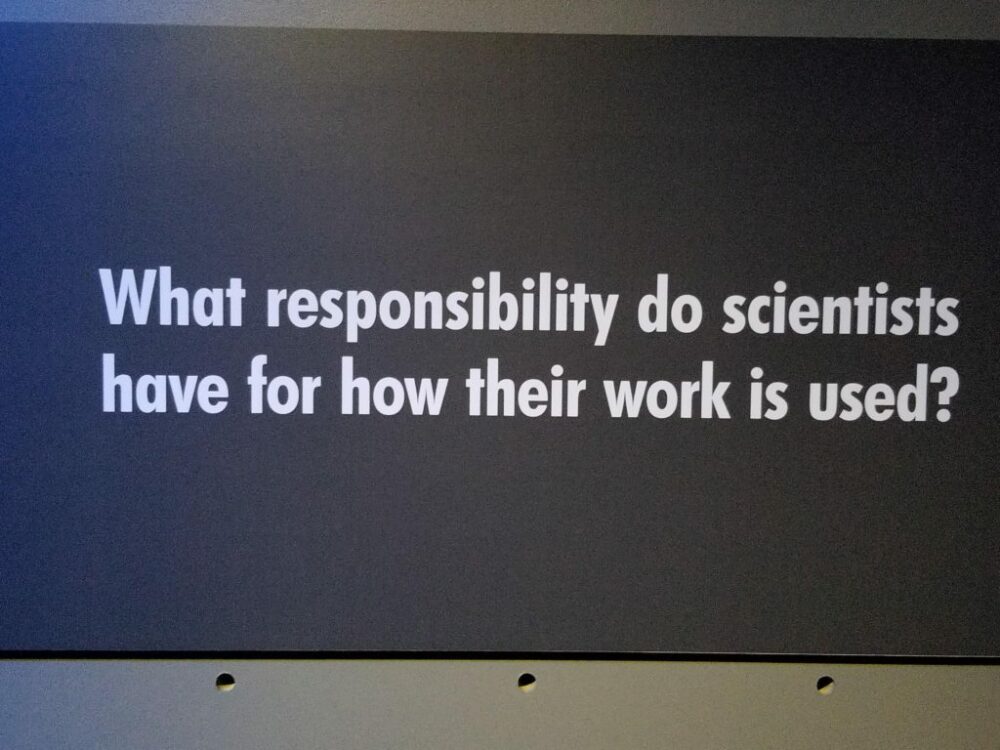 Yes, I’m sure many wrestled with their role. 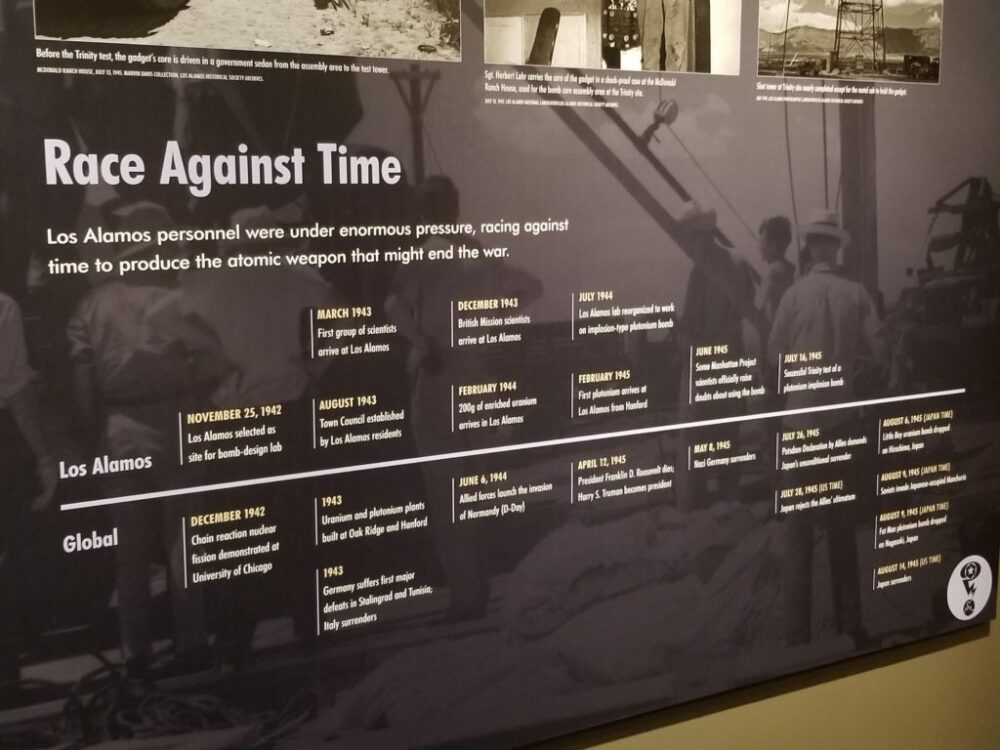 A persistent argument for dropping the atomic bomb has been even though many civilian lives were lost at Hiroshima and Nagasaki and the horrors of radiation sickness after that, how many more would have been lost if the war continued much longer? I certainly don’t have the answer

Wanted to just give you a taste of what the museum is like. We can all look up the story about the Manhattan Project. I’m sure many of you have read books about it. (I do have many more pictures and will develop a photo book for the trip. Maybe It’s something I can put online and post a link (but that will be a while).

From Santa Fe south for about 20 miles, no part of Route 66 still exists. I-25 is “on top of it” so to speak. About 20 miles north of Albuquerque it does exist but it’s very similar to information I’ve already posted.

At the end of the day, drove back east about 20 miles on the “post 1937” Route 66. The route thru Santa Fe was pre-1937. There is a “Musical Highway” there. The state of NM has cut rumble strips into the east bound lane so that if you drive at 45 miles per hour over the strips, your tires play America the Beautiful. I had read it while researching the trip but had to see it (or rather hear it). It does work. I had the record app on my phone recording the sound. It’s hard to hear but it is there. Of course, was better in person. I may post it here or on Facebook when I figure it out!

I’m calling it a day.

Final thought on the theme song for the trip. It will be “I did it My Way”. I know, the song is looking back at a life, but some of the words fit for the trip.