Disclose the answers to the earlier quiz and name the winner. See bottom of page. mail

Morning stop at Meteor Crater just west of Winslow. It’s the best preserved meteor crater in the world. One mile across and about 550 feet deep. Much scientific work has been done here to help better understand how to identify meteor craters from volcanic eruptions. Tour of museum and either self-guided or guided tours of crater rim. Being The Driveby Tourist, of course I took the self guided. Talked with a guy from Raleigh NC who left Chicago on April 2nd and is on much the same schedule as me. 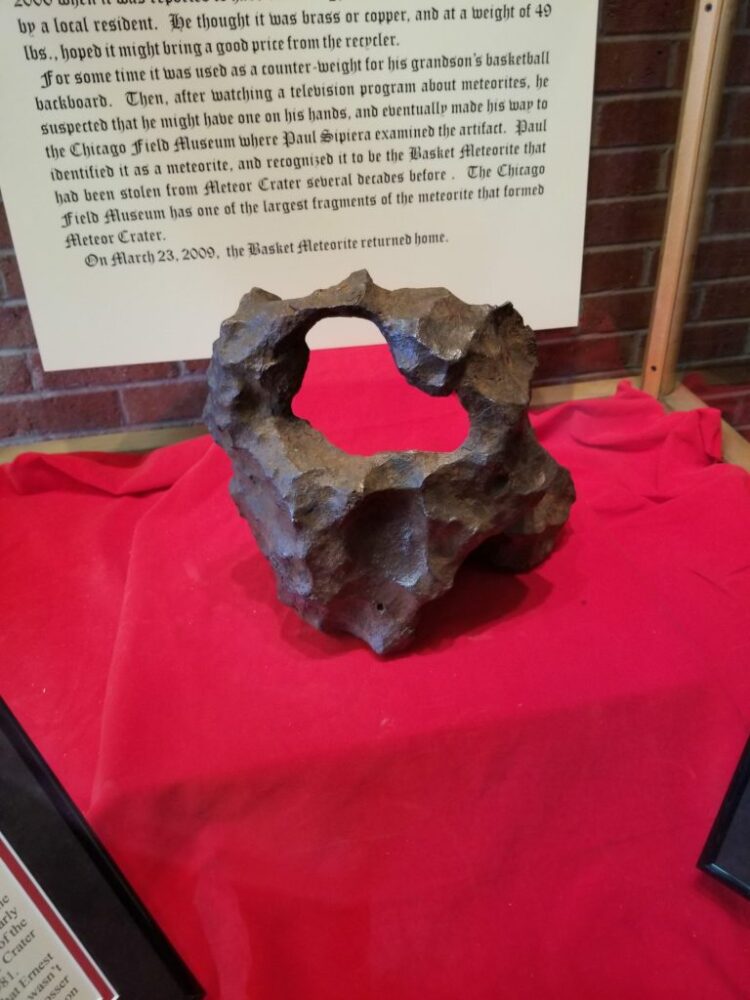 This piece of meteorite was stolen from the  museum in the early ’70’s. A man in Wisconsin acquired it in an auction and thought he could sell it for scrape metal. Fortunately someone realized it wasn’t just scrape metal and it went to a museum in Chicago and then back here in 2009. 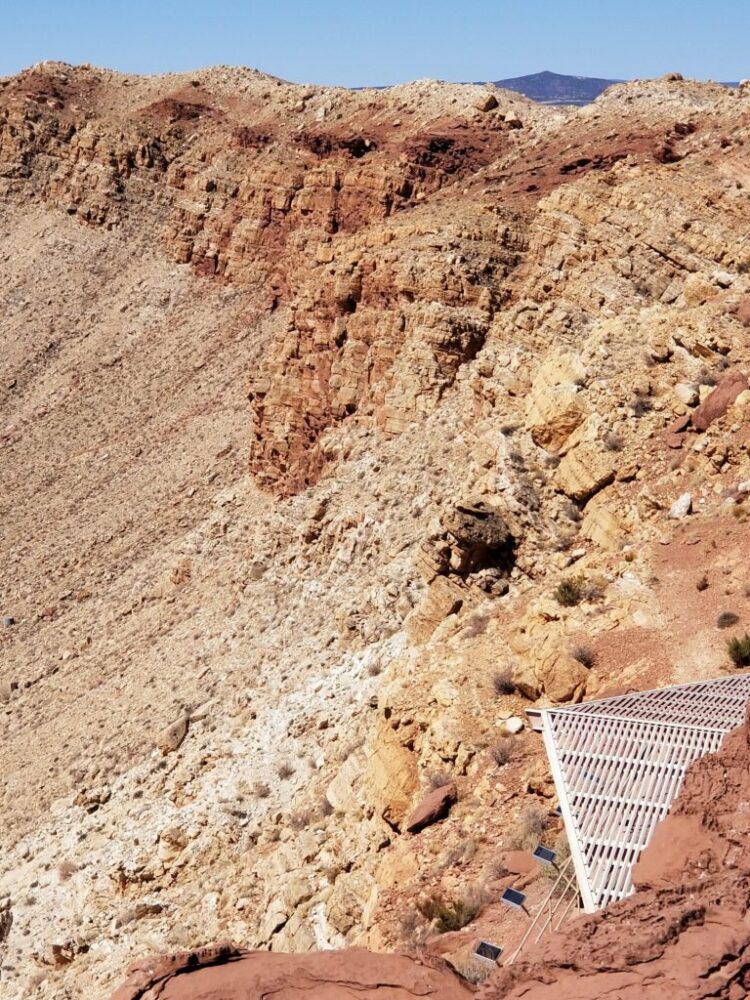 This is a shot of the side of the crater. Several more to follow. 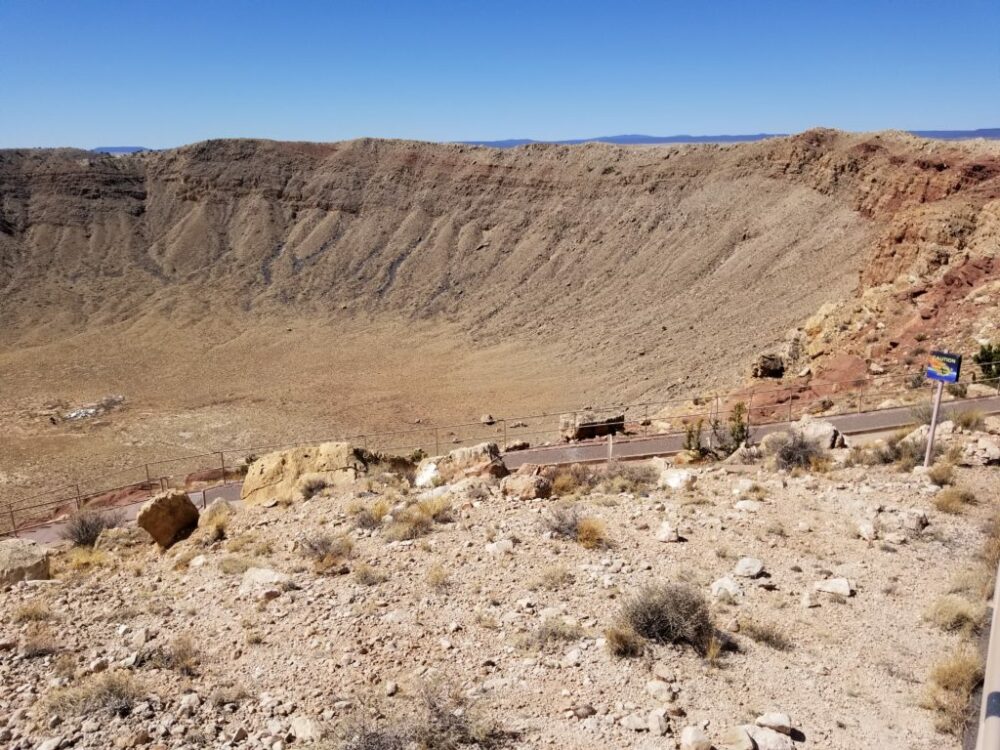 Can’t get higher or back farther so have to show the full crater in 2 pictures. Neither my cell phone nor my Nikon have enough wide angle to get it all in one picture. 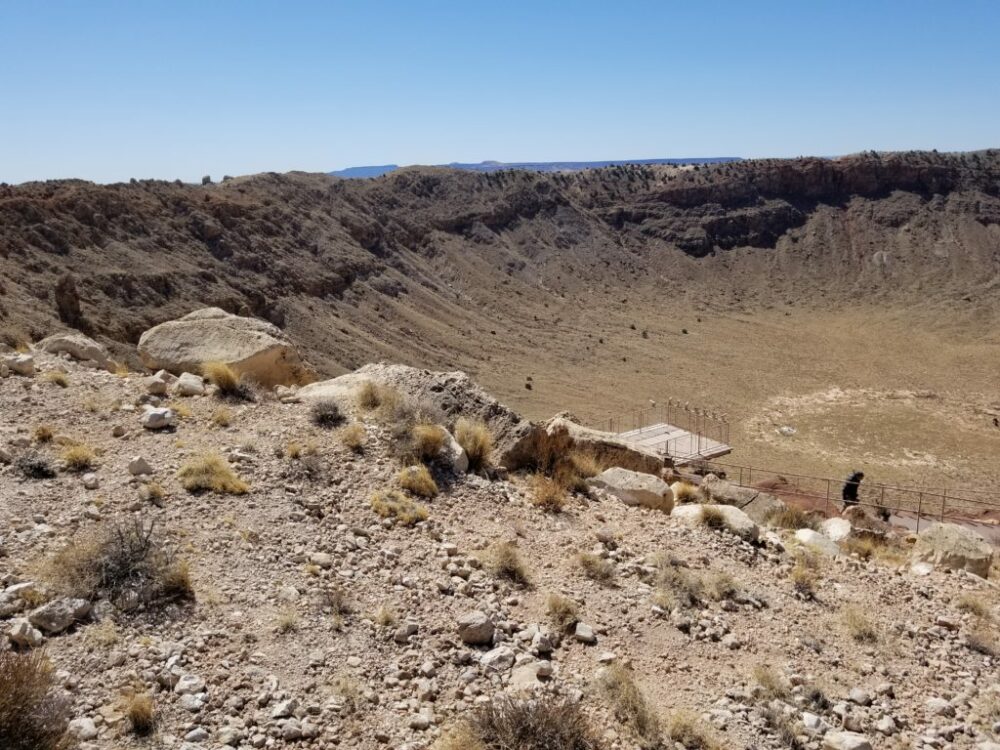 Other half of the crater. 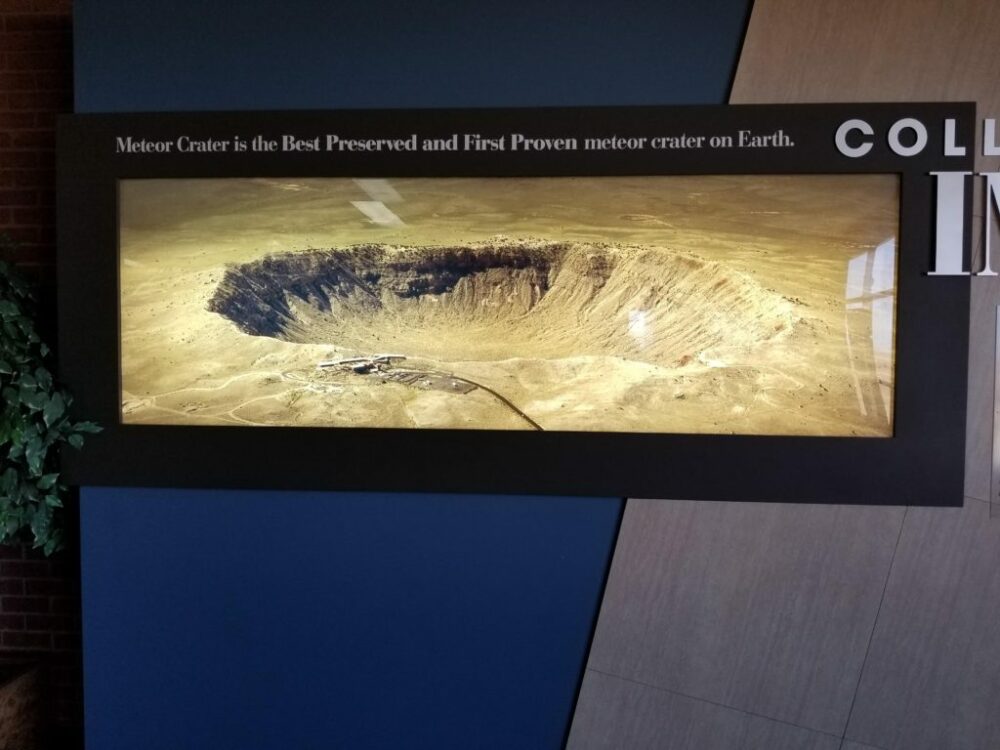 Mostly on I-40 from the crater to Flagstaff. Stopped to eat and get gas. Recommend Mike and Ronda’s The Place in Flagstaff. Great Route 66 Diner. 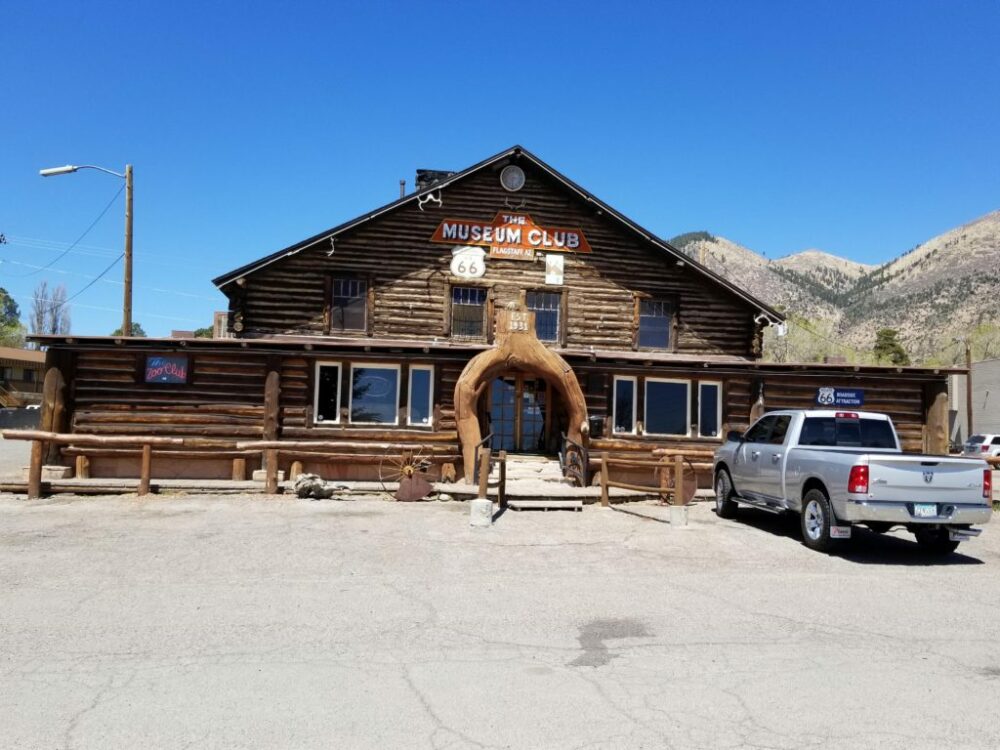 Well known (apparently) eating and drinking place on the east side of Flagstaff. The inverted split tree trunk is a unique feature. (I think!!) 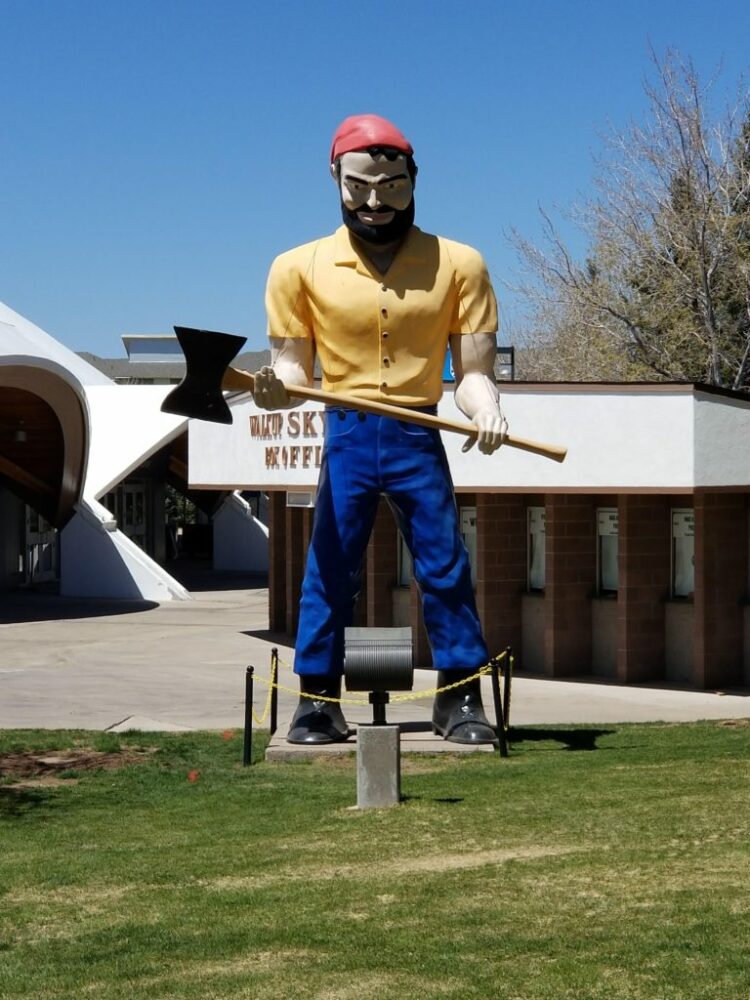 Another of the “Muffler Men” at University of Northern Arizona. Think this is the last of them! There are a number of them with their hands formed like that and they originally held a muffler. There is another one at UNA as well, since the university athletics program is known as the Lumberjacks.

In about 50 miles, Route 66 enters the longest stretch of highway without getting on an Interstate. About 160 miles of driving off “the superslab” as one of the authors whose book I read calls it. Jerry McClanahan. Highly recommend his book EZ 66 Guide if you plan to take the trip. Gives turn by  turn directions both ways, East and West.  http://www.mcjerry66.com/ 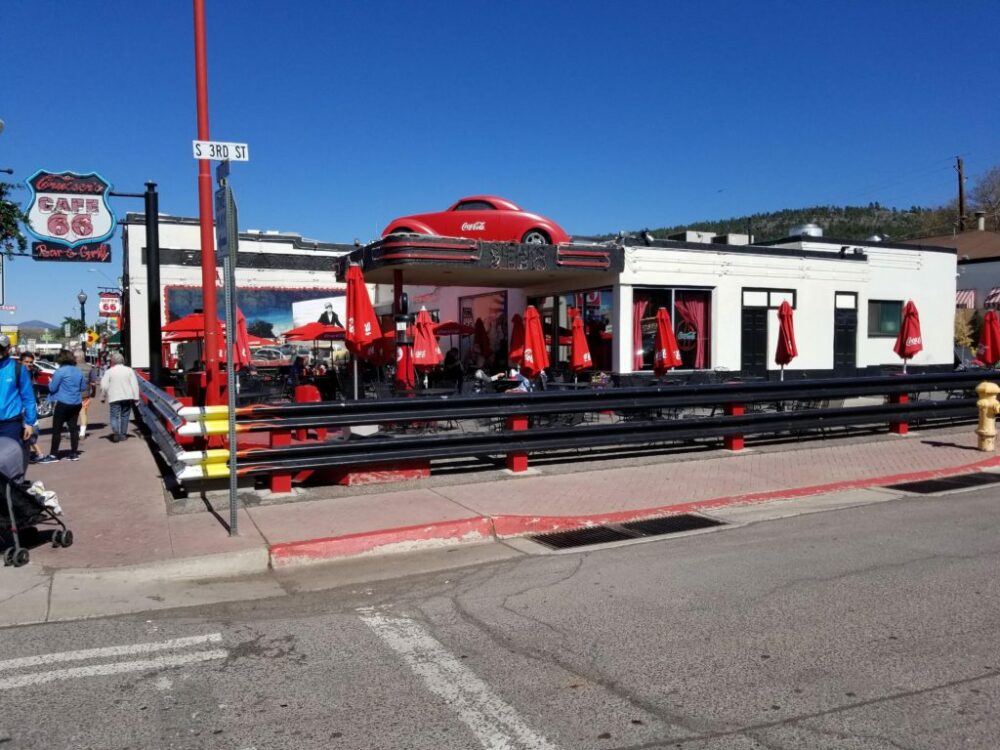 Williams AZ. There are 4 or 5 blocks of Route 66 establishments mixed in with Grand Canyon tours, displays, memorabilia. This town is very close to the Grand Canyon road going north from I-40. 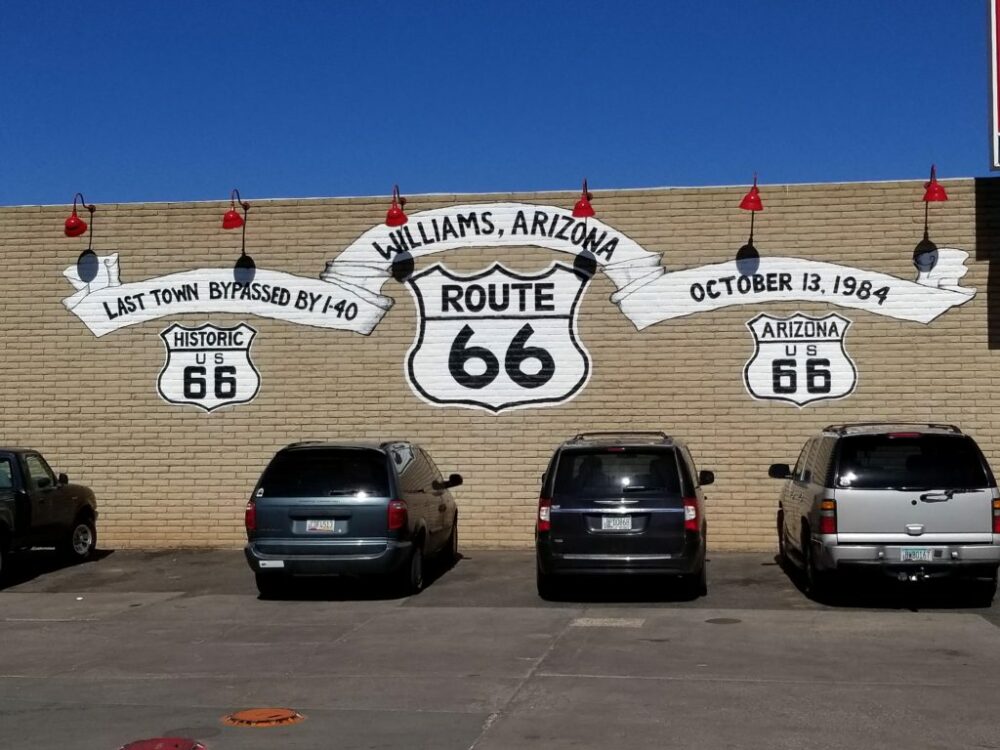 Don’t have to say what this is. Or did I just do that! Painting on the wall says it all. (The cars are real, not painted on the wall! I couldn’t get them to come out and move their cars for me!) 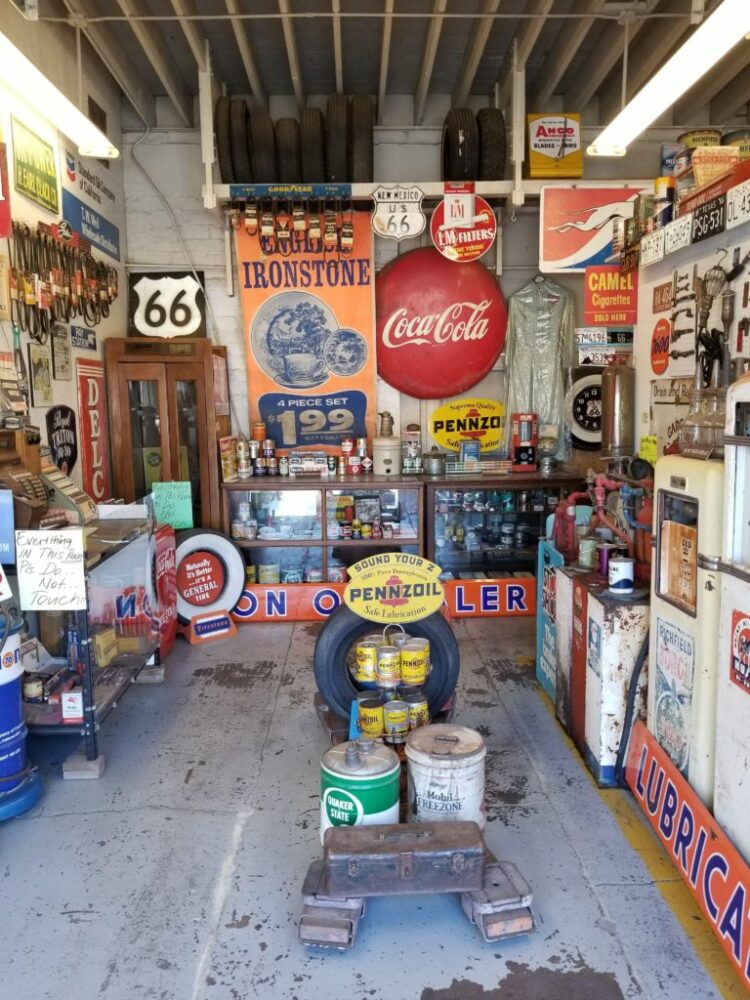 Pete’s Route 66 Gas Station Museum. Talked with Pete for a while. He just opened for the season and doesn’t have his trademark 1950 Ford in front of the station. His dad bought it new in 1950. He took it over and kept it in mint condition. It’s a 68 year old two owner car, don’t see many of those! So, not restored, kept in original condition. (Coincidence, my dad owned a 1950 Ford as well! Remember riding in the back seat with sisters and brothers, always fighting for the best seat.) 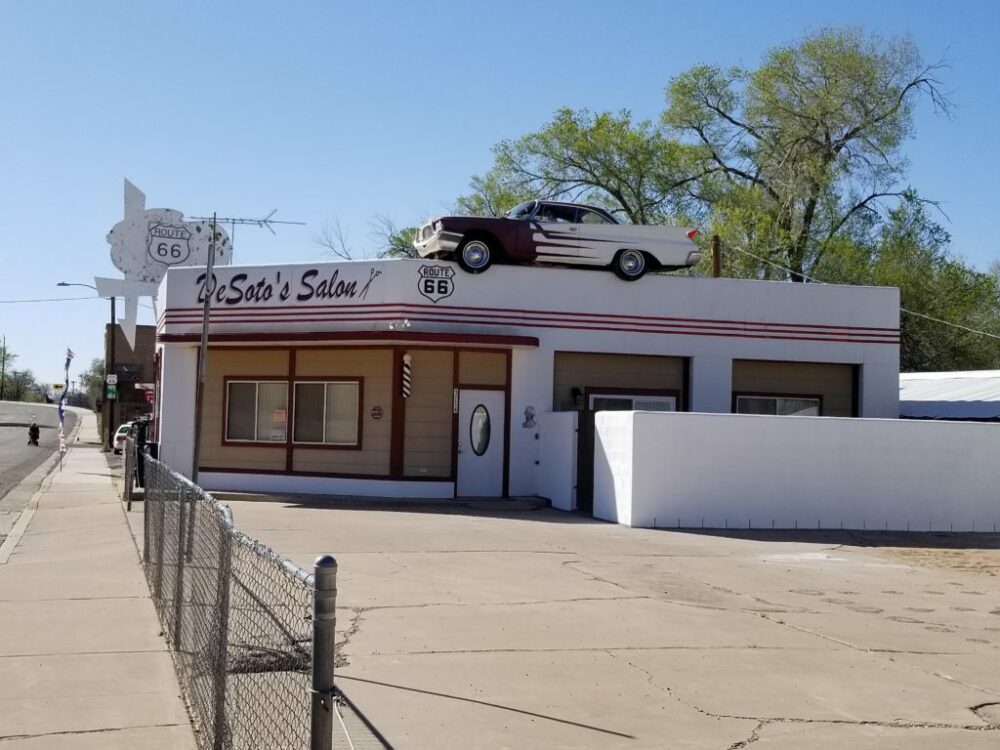 DeSoto’s Salon. Closed. What is it with Route 66 businesses, putting cars and giants on top of buildings.

Down the road after Williams, Route 66 gets away from I-40 for almost 160 miles. Mostly small towns except for Kingman. Before I ended the day there, I was in Seligman. They built themselves up as a tourist attraction as they get a lot of tour buses stop at the shops here. 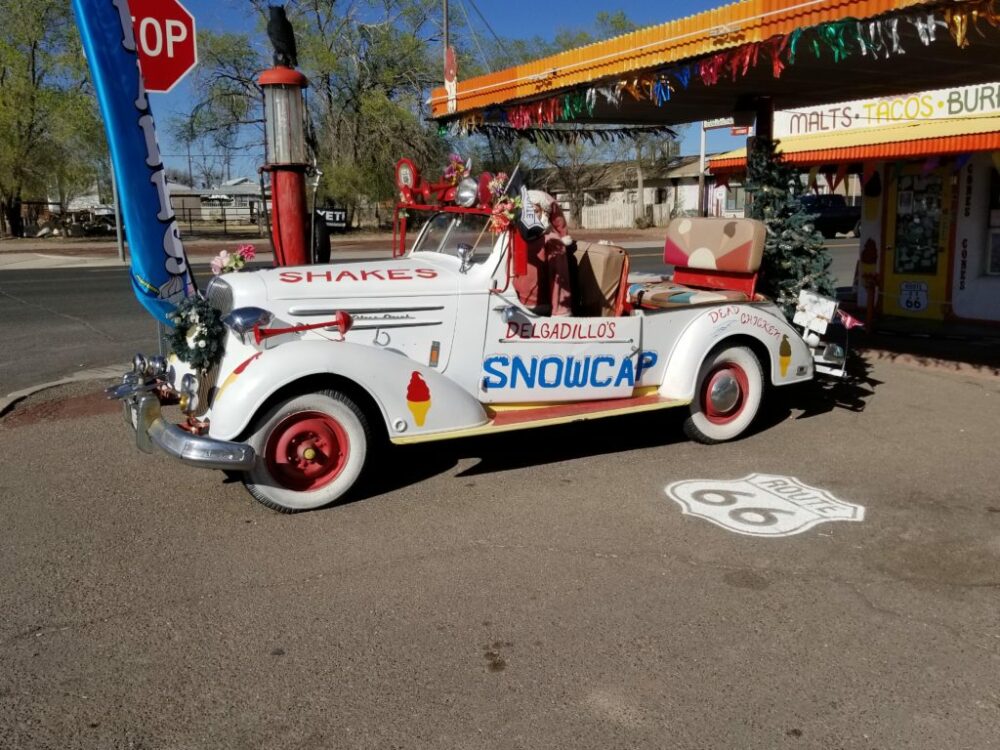 The Snowcap Drive In is a mainstay along with a barber shop turned memorabilia shop. Originally brothers Angel and Juan Delgadillo were the business owners, Angel the barber and Juan owned the Snowcap and his family has kept it going after his passing. He as known as a practical joker with a great sense of humor. 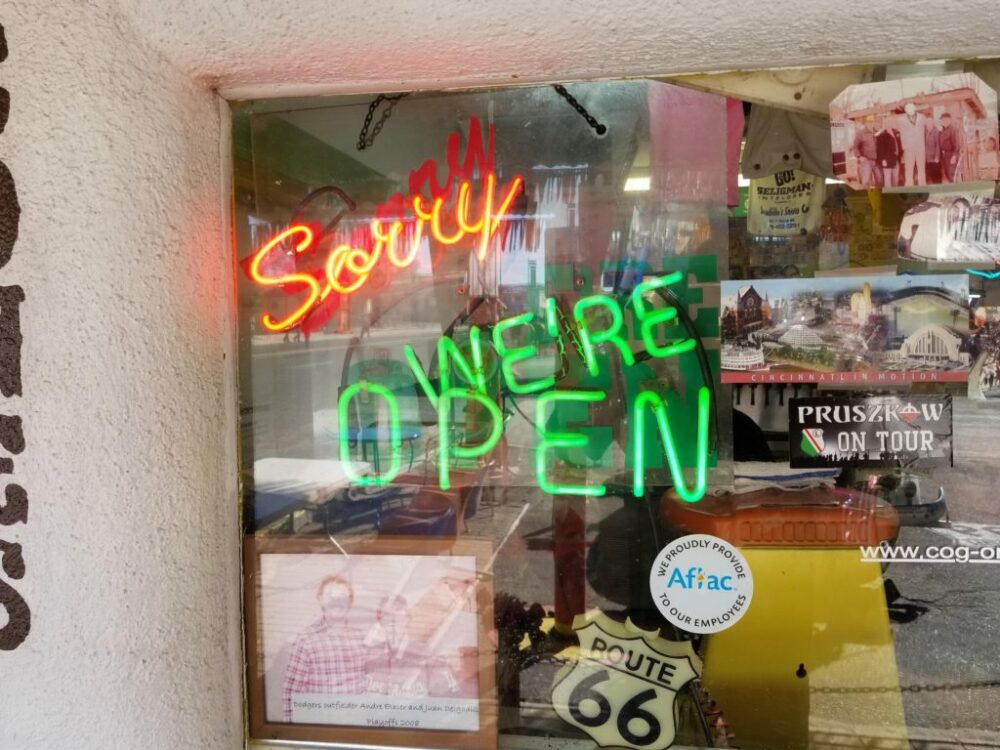 As above, the sense of humor is showing here. They have a mustard bottle with fake mustard coming out if they squirt it at a customer. And a sign that advertises “Dead Chicken”!  I had a sundae and she asked if I wanted a male or a female sundae. I’ll let you figure that out! 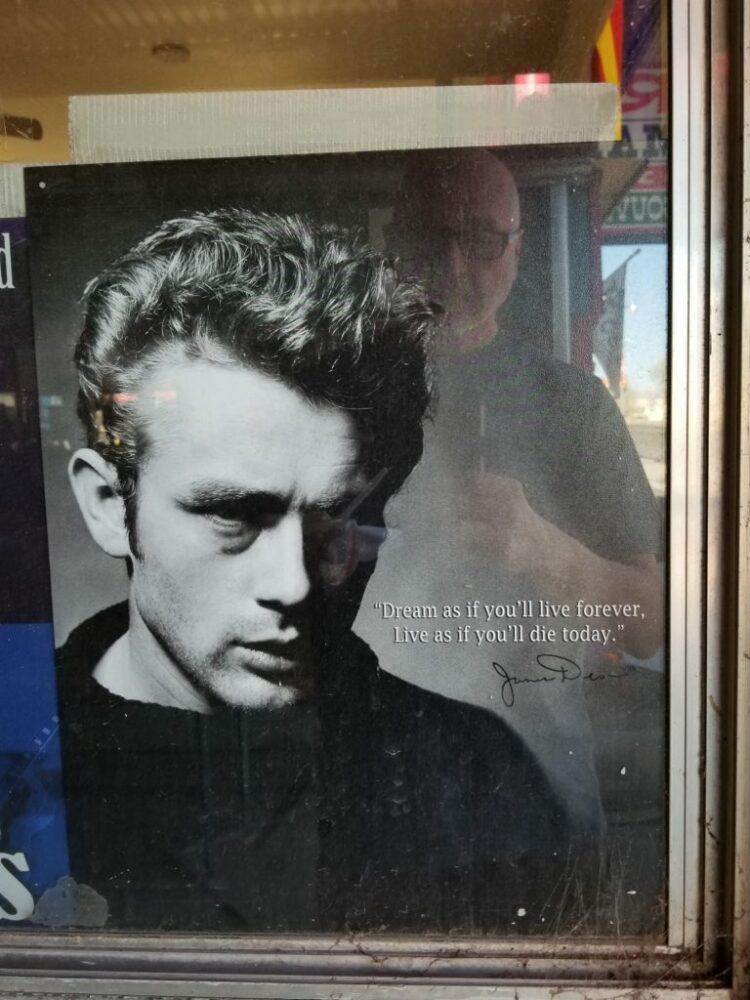 This was in a shop window. Not sure about the philosophy. 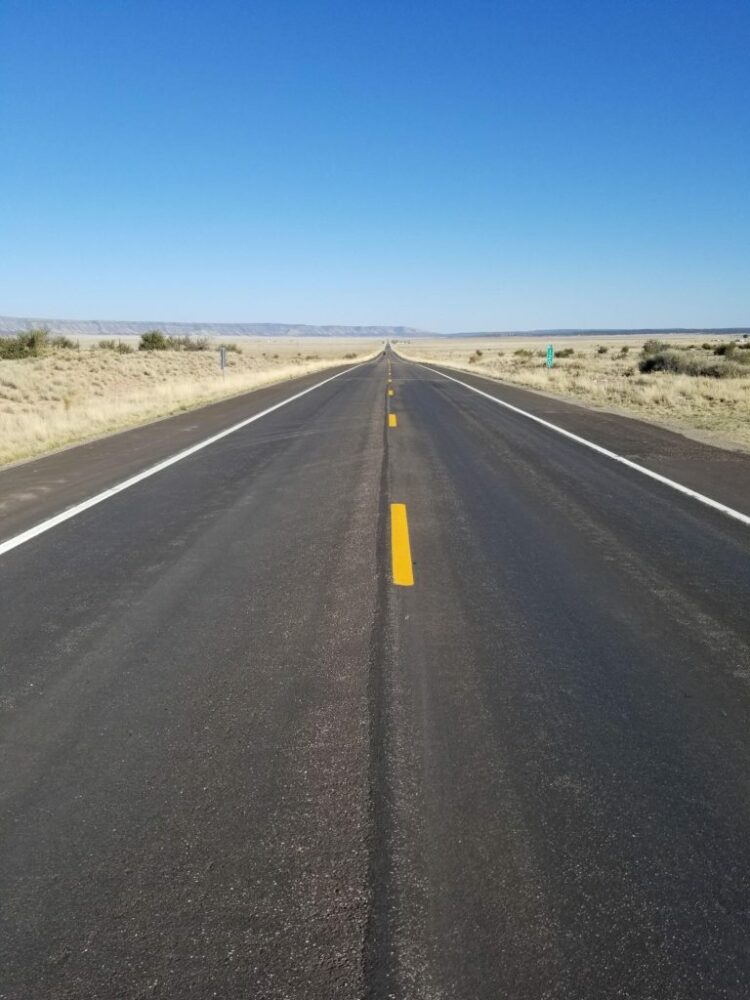 “Life in the Vast Lane” to parody another Eagles song (remember yesterday?)

Great day again. Williams and Seligman are great little towns. Can see why some people spend weeks on Route 66 or keep coming back to it. Could easily spend half a day in each of just these two towns.

Had quite an experience to add to  my life. Looking forward to continuing this blog when Route 66 runs into the Pacific and on the trip home again. Plan to keep on writing a blog about traveling. (I know there are thousands of travel blogs out there!)

Time to reveal the quiz answers and winner!

Quiz: After the anchor cities (Chicago and LA and St. Louis, what are the next 4 largest cities in order by population of metropolitan area.   Drum roll please!

And the winner is: My brother in law, Milo!!! (He’ll get the free ticket I said in announcing the quiz!)

Thanks to all who have been following me. It’s coming to an end in a few days with some time to visit sister in law and her husband in Anaheim and then the long drive back (Much more Interstate mileage for that.)