Still morning as I write this. “Drove by” several attractions this morning already. Breakfast at Mr. D’z. Recommended by several of the tour books. Visitor Center across the street. There and a couple more stops and head out. See if I can get a picture of any of the “Long and Winding Road” ahead of me.

Route 66 thru Kingman is called Andy Devine Avenue. You have to either be old or a fan of old Roy Rogers movies to remember him. He was also in some John Wayne movies and on TV back in the ’50’s. His family owned and operated the Beale historic hotel. It’s been shut down since 2012 and there are on-going discussions about restoring it, converting it, or demolishing.

The Day Breaks… (Isn’t that the start of a Beatles song?) 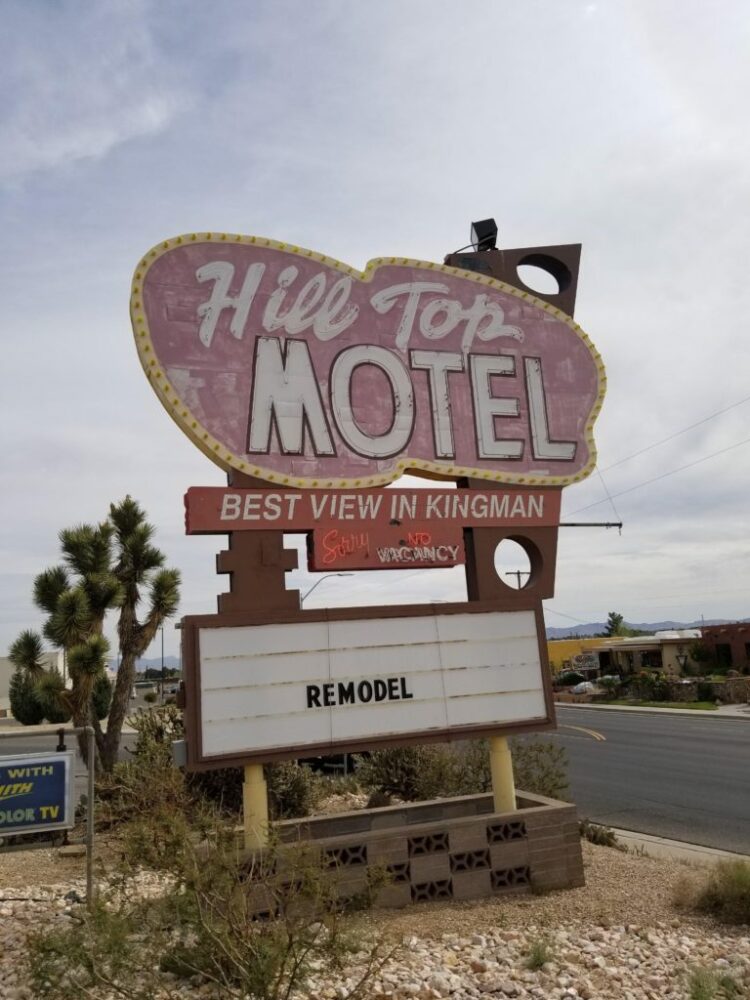 Another classic ’66 motel. Great to see these old treasures restored! 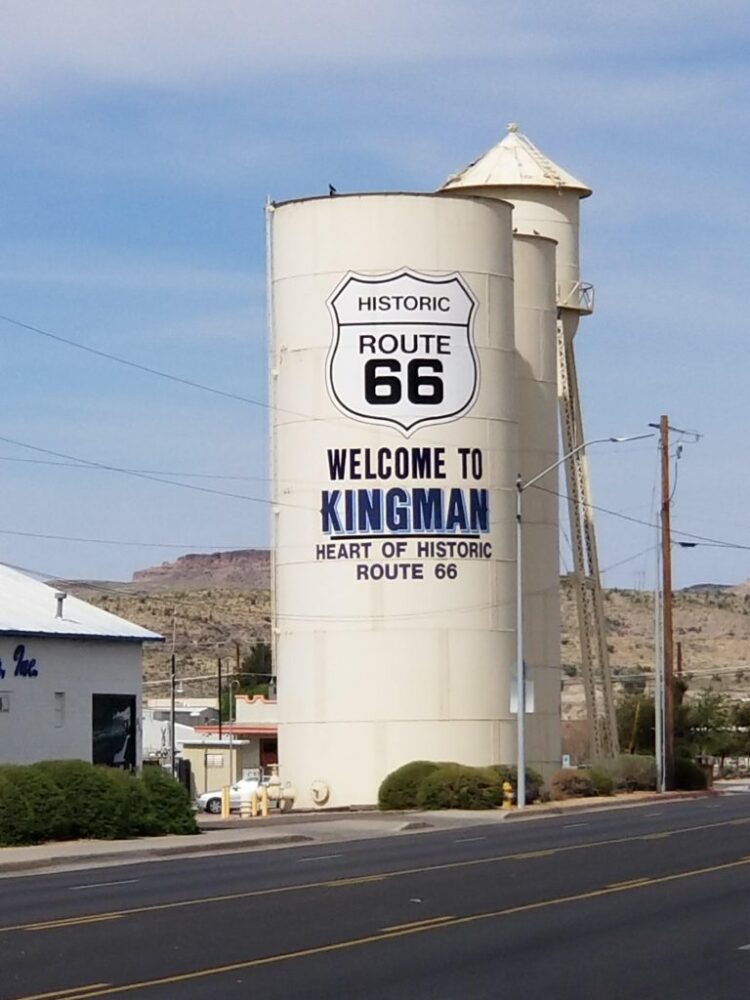 Water tower is over 100 years old. Used for advertising now. 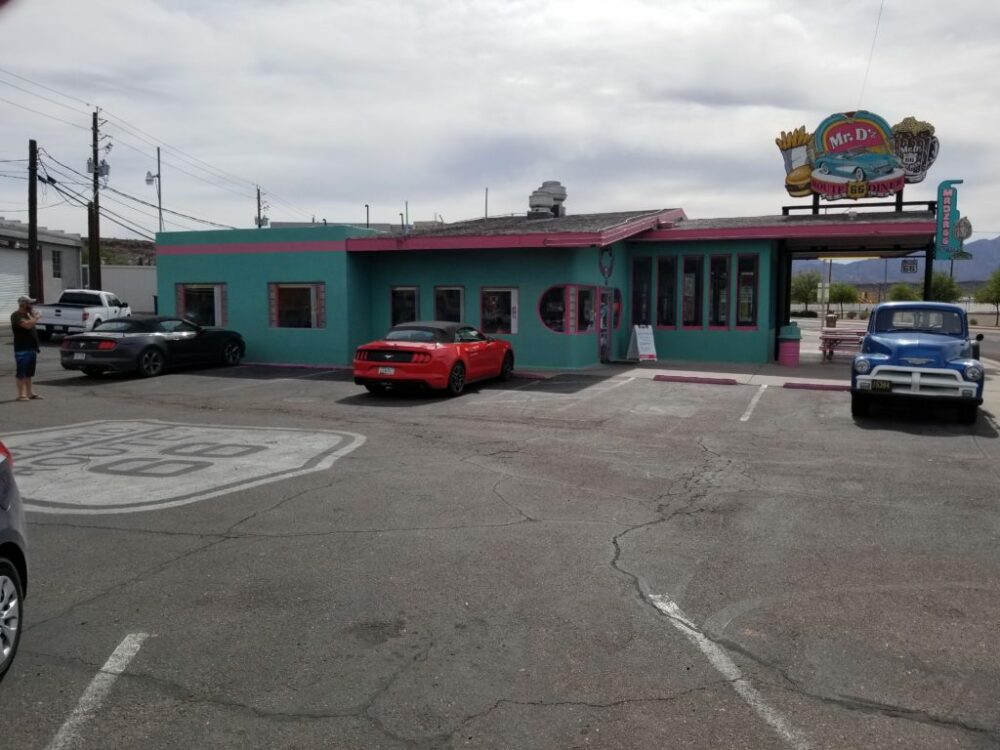 Mr. D’z for breakfast. Too early for burger, fries and a chocolate malt! 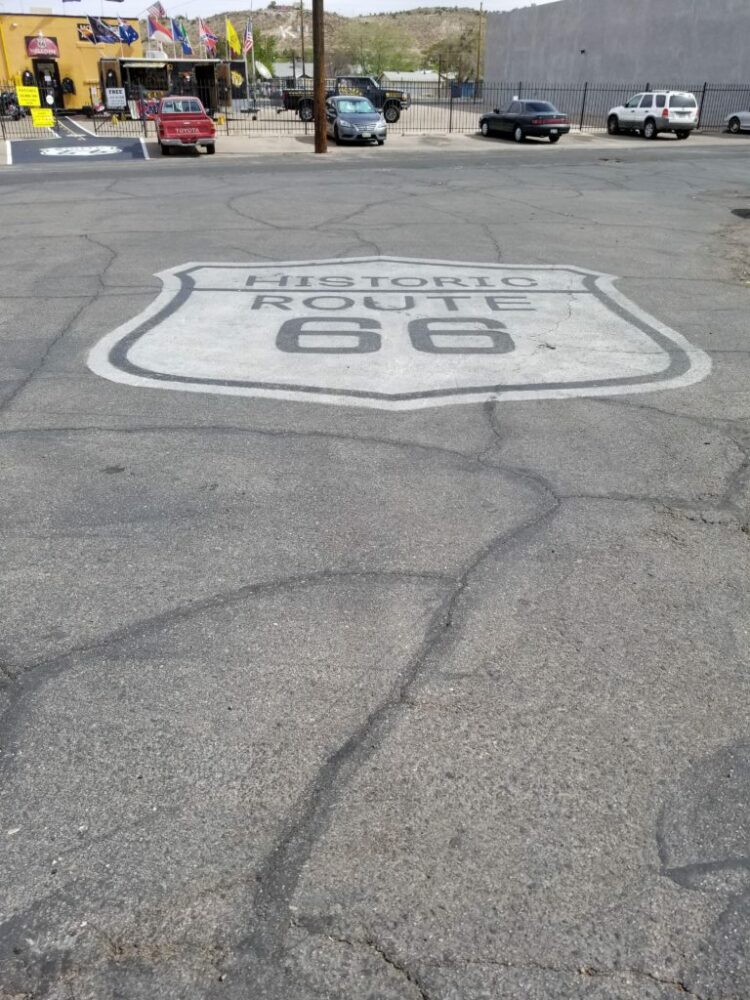 Mr. D’z also has a Route 66 logo painted in the parking lot. Seen a lot of these in the last 2 weeks. 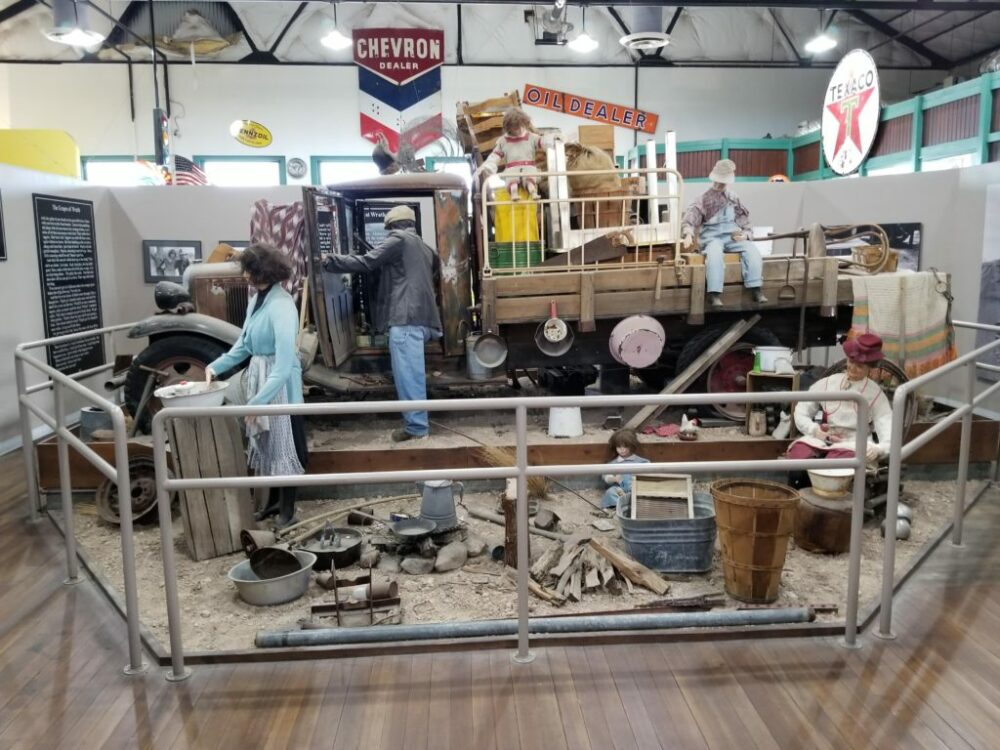 Inside Route 66 Museum. Presentation of a scene from The Grapes of Wrath. 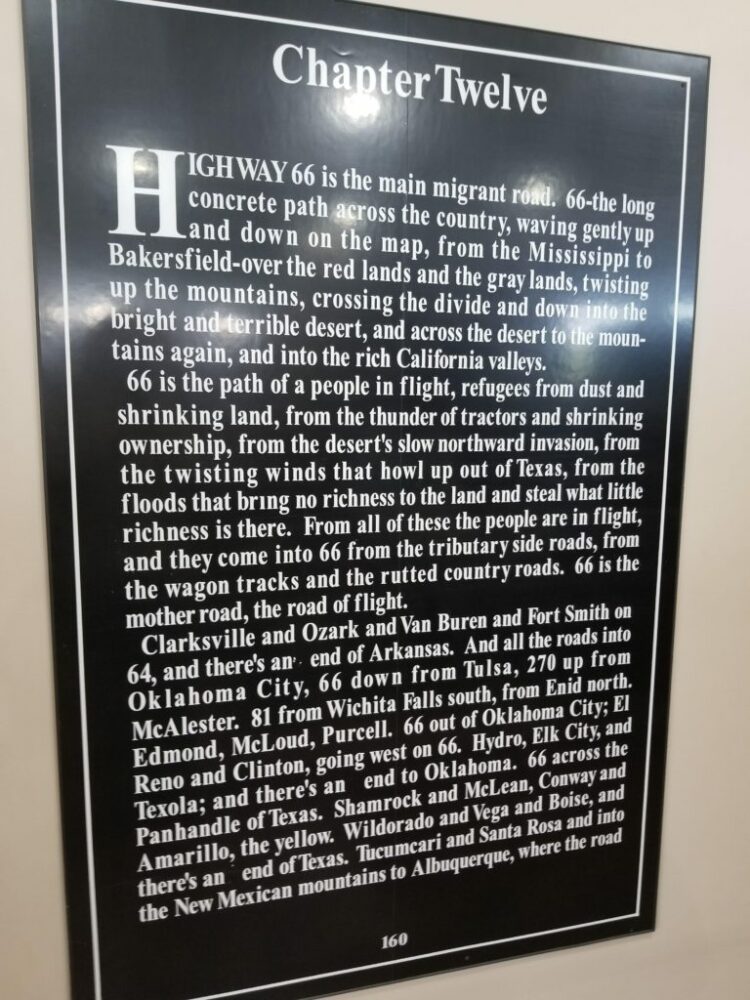 Several panels from the book hung on the wall around the exhibit. (Had to take at an angle to cut down glare.) 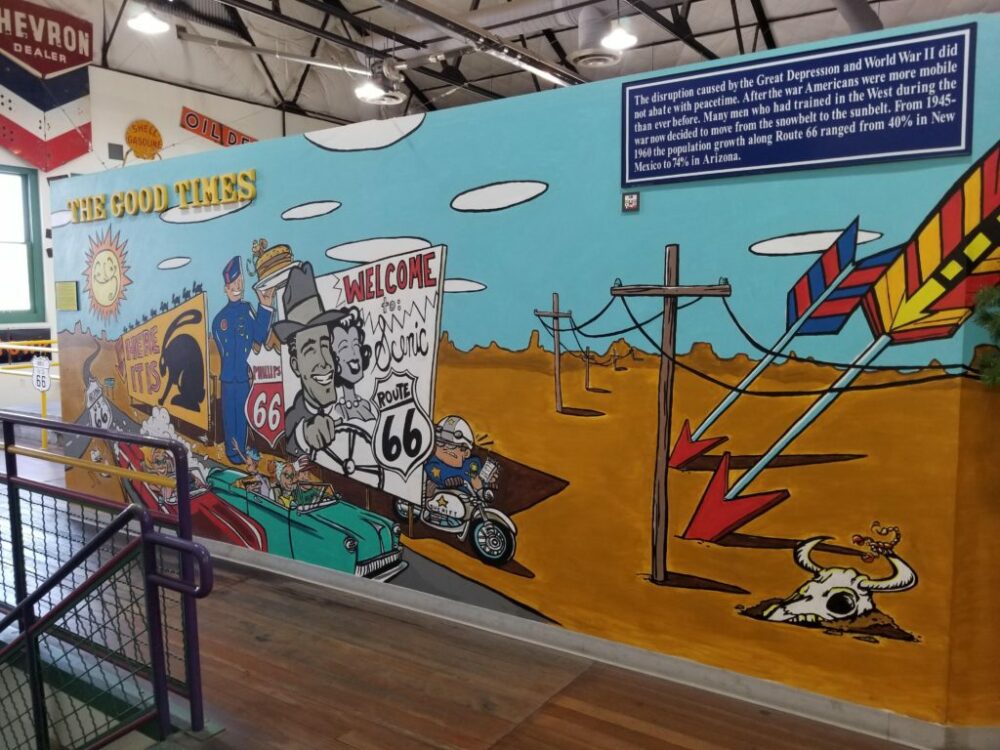 Many scenes like this to show the many reasons for using ’66. In the ’30’s, families escaping the Dust Bowl and moving a promising better life in California. Families using the road for vacations from the mid-west to AZ and California. Trucks and other commerce. 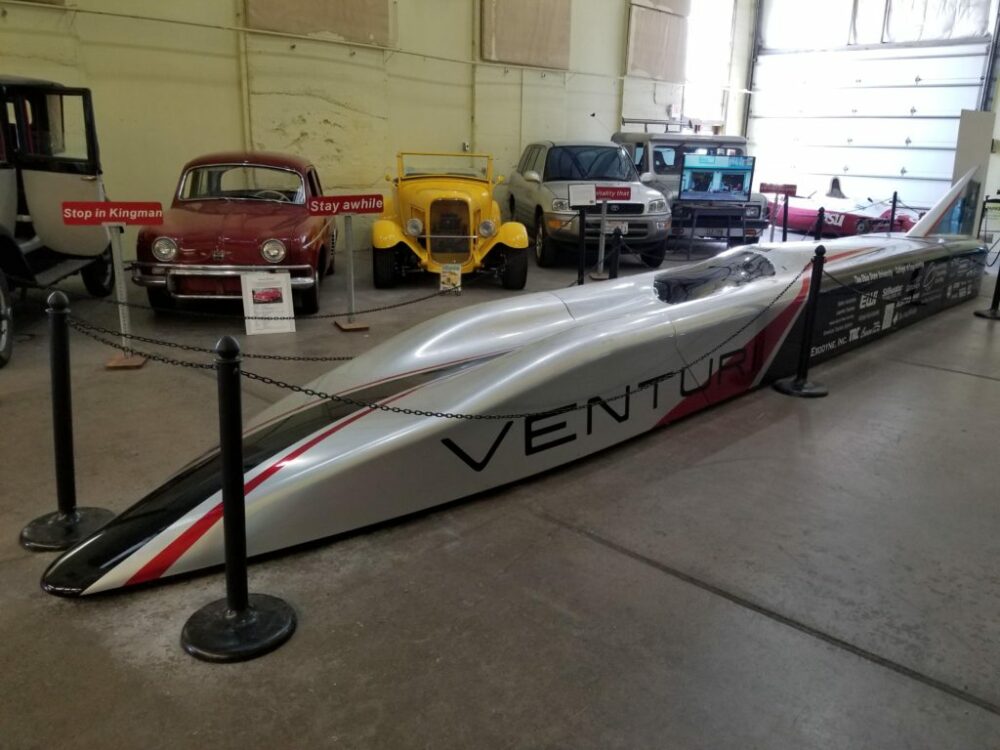 Fully electric vehicle developed by students at Ohio State University in the foreground.

Had other electrics car on display. Some of them were early electric golf carts and others were experimental electric vehicles.  There were several early attempts at production vehicles using batteries. 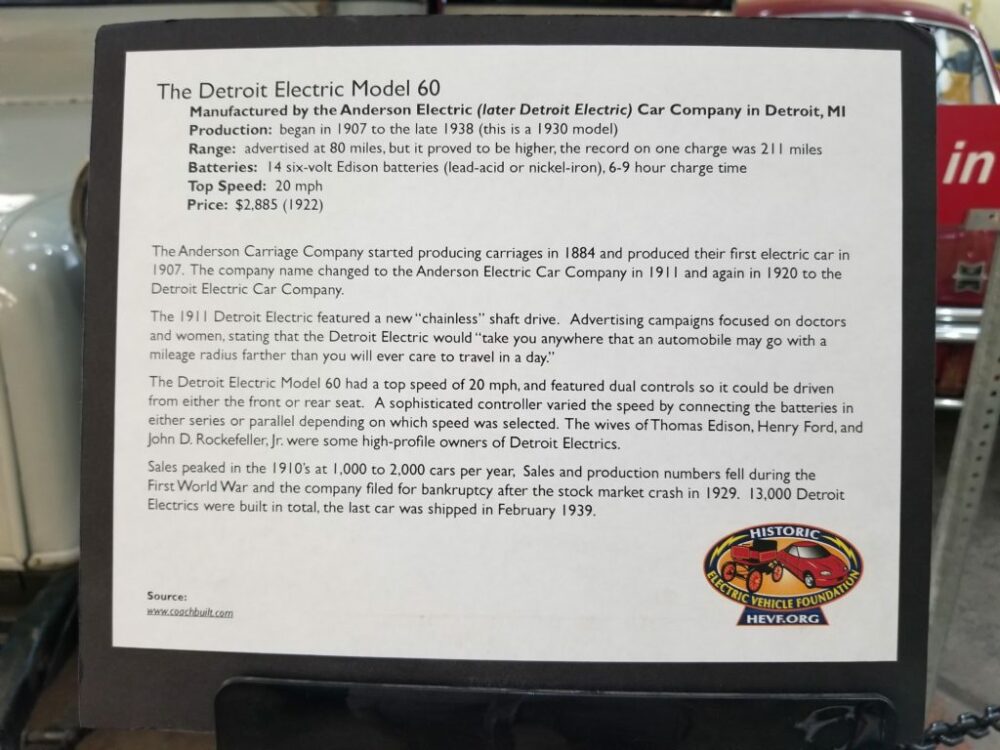 Thought this was interesting. There were several examples of production electric vehicles with this being the earliest. Made from 1907 into 1938. Wasn’t able to find out how many were actually sold. 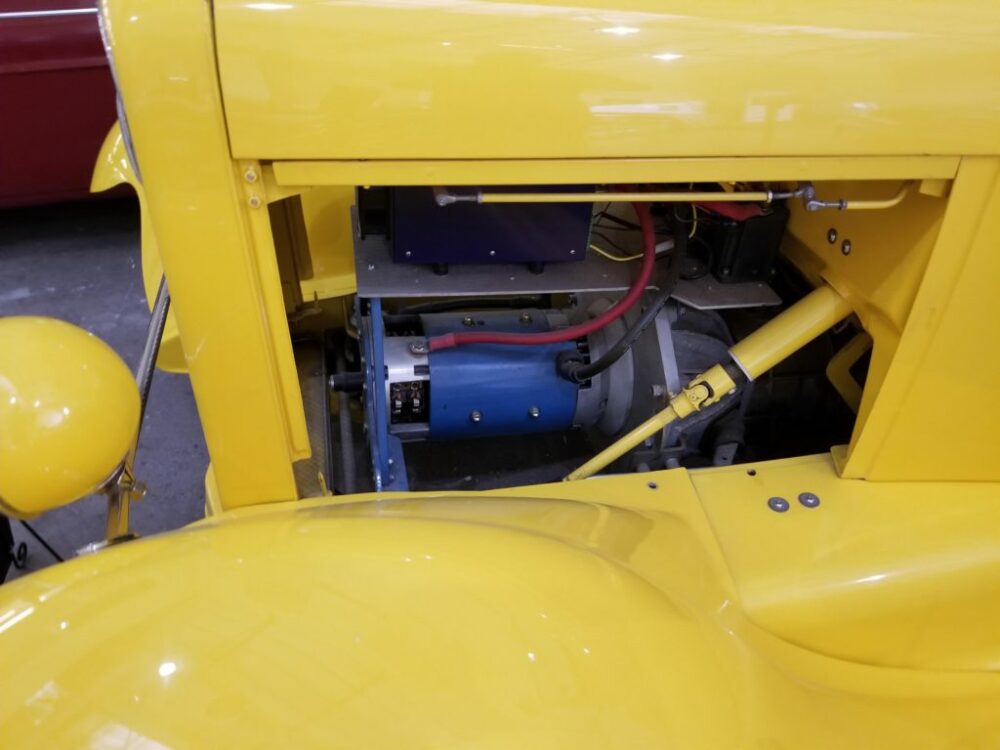 Power plant for this car. 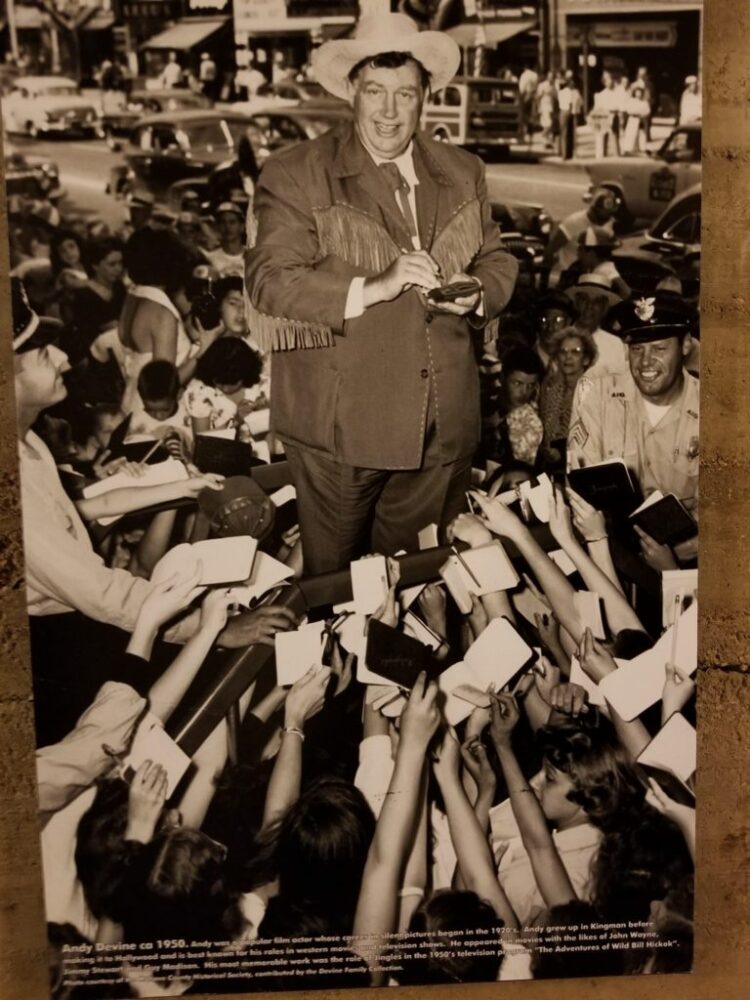 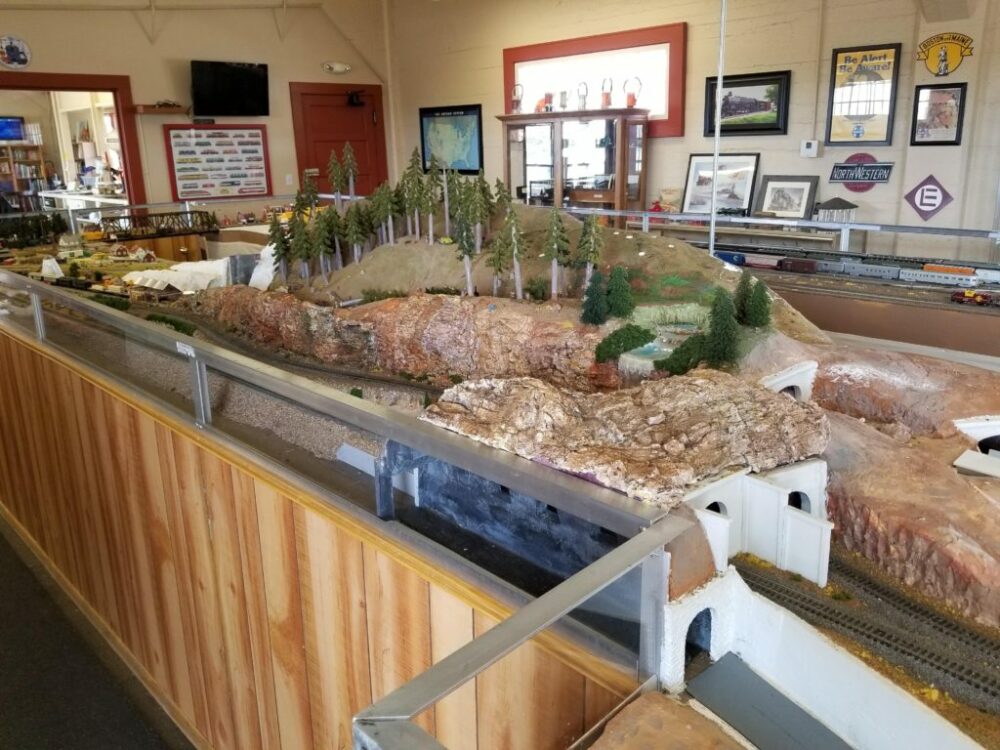 Scale model Locomotive Museum in Kingman. Have some video of this and will “attempt” to share another day. 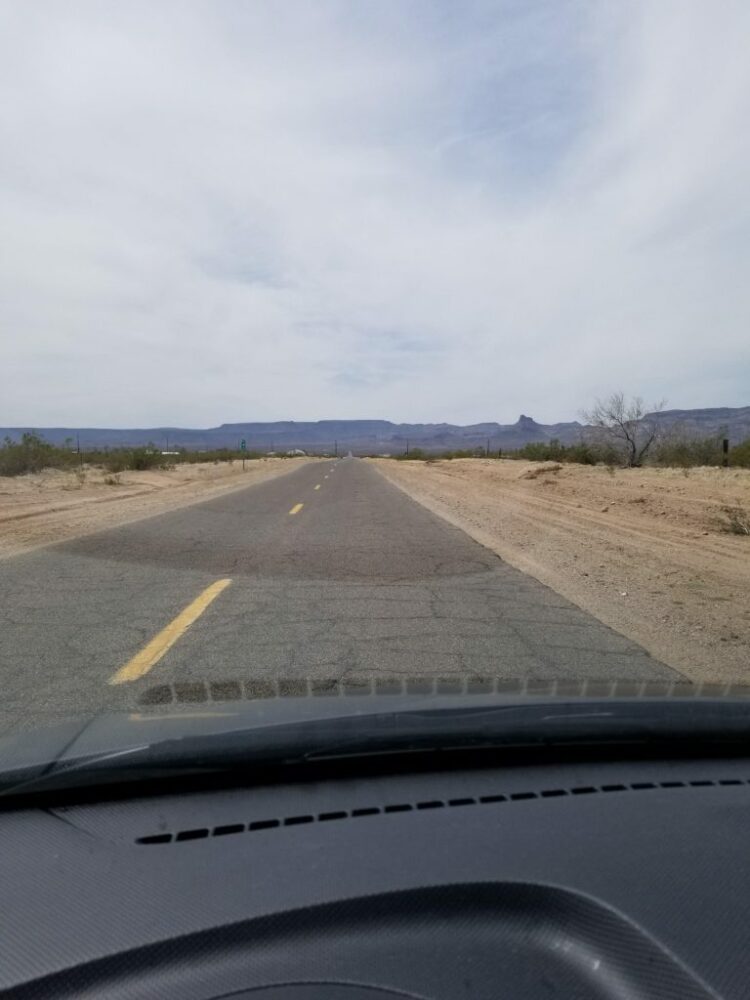 The Driveby Tourist getting impatient to move along, so picture is thru windshield! 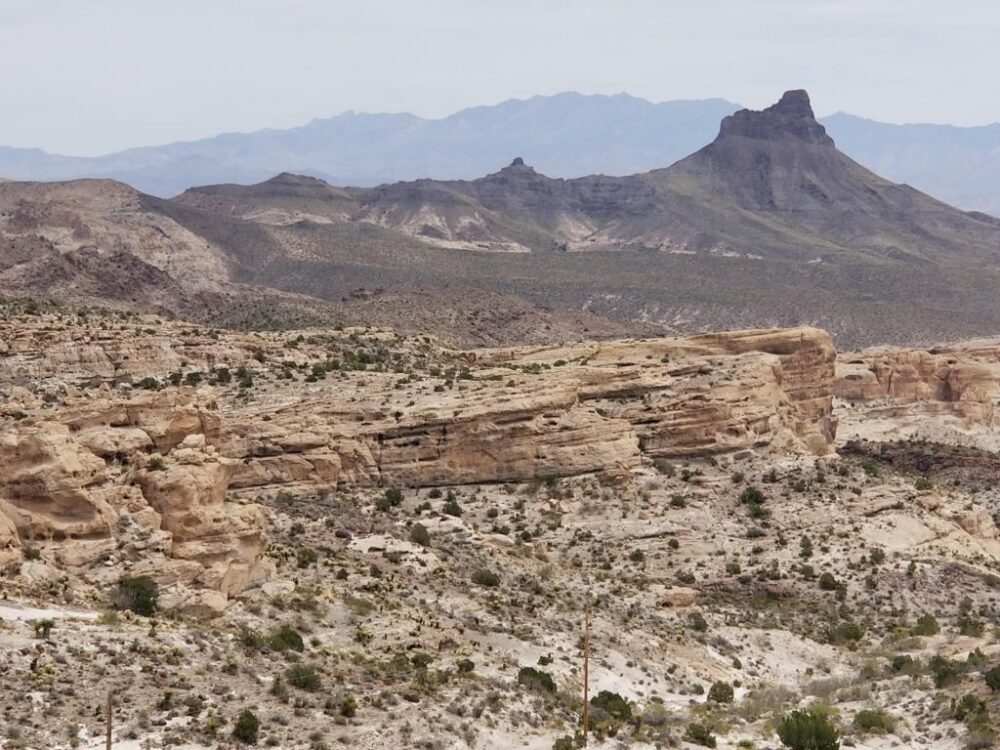 Interesting views of the Arizona roadside on Route 66. This is a section where nearly 160 miles of Old ’66 run far from I-40 except for crossing it a few times. Great scenery. Have other pictures but can only show so many. 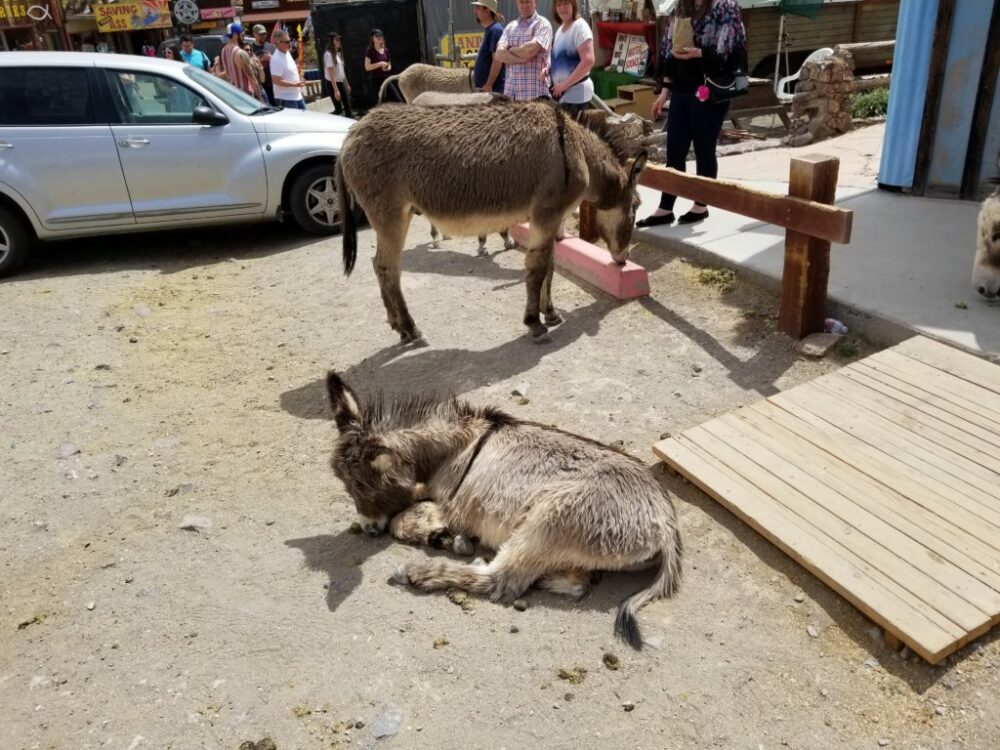 Oatman AZ is a “living ghost town”. Originally a mining camp. Gold was discovered in 1915 and within a year, the population grew to about 3,500. When the gold ran out, as natural resources tend to do, the town originally survive by serving travels on Route 66 which came thru as Main Street. Current population is around 130. Town survives now on tourist trade. About 4 or 5 blocks of shops, restaurants, bars and other amusement like panning for gold, tours of the old mining operations that still remain. 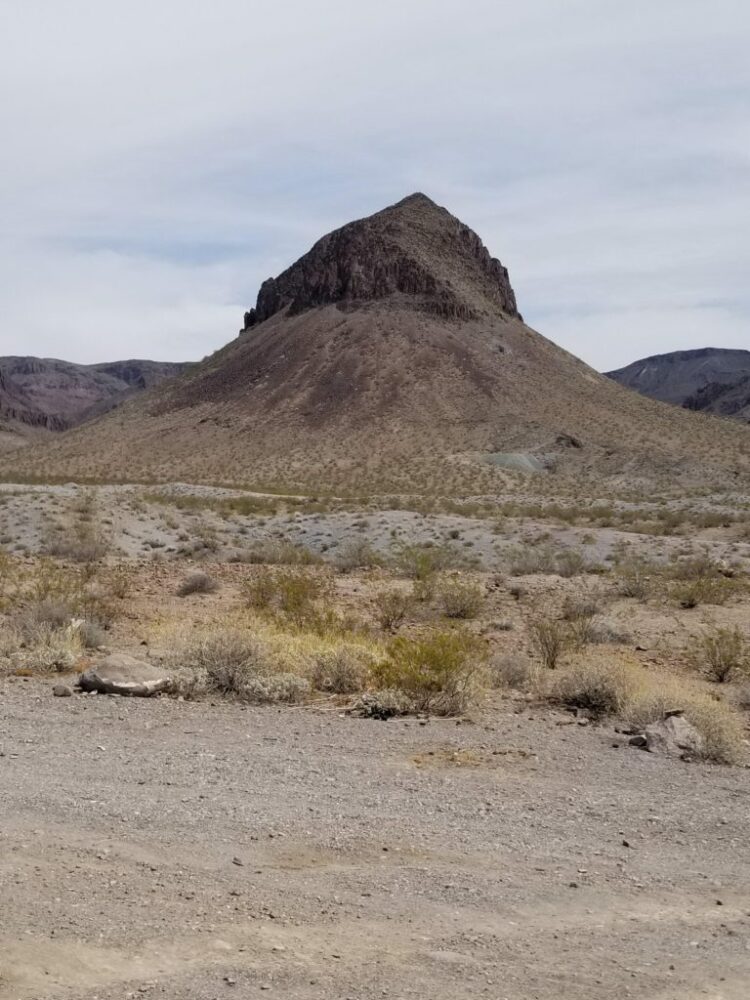 After Oatman, another empty drive to California. Only a couple of very small towns that are mostly ghost towns along the 25 miles or so between Oatman and Topock on the border. 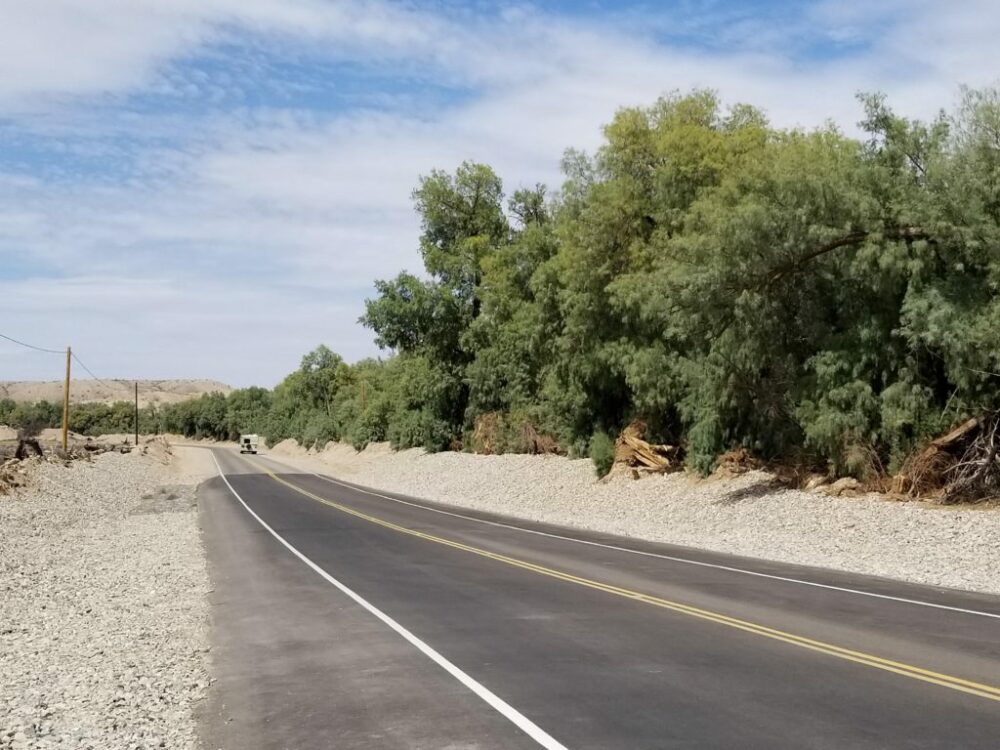 Nearing the AZ/CA border, which is the Colorado River, start to see some trees. Not very many and the terrain gets drier again after crossing the river. Temperatures vary as well. Kingman (at 3,333 elevation) in the morning was 41 degrees. Oatman (about 2700 ft elevation after crossing a mountain pass that was about 4000  ft) in the early afternoon was about 80 degrees. Needles, on the Colorado River and 495 ft elevation, was 90 degrees around 3 PM.

Tried to find a place to take a picture of the road itself to show the twists and turns it took. Couldn’t get off the road to go high enough. Above is a screen shot from the GPS showing why this qualifies as “The Long and Winding Road”. (One of my favorite Beatles songs.)

Late lunch stop in Needles CA. They are serious about gas prices here. Saw one sign for $4.39. Lowest price I’ve seen was $2.24 in MO. 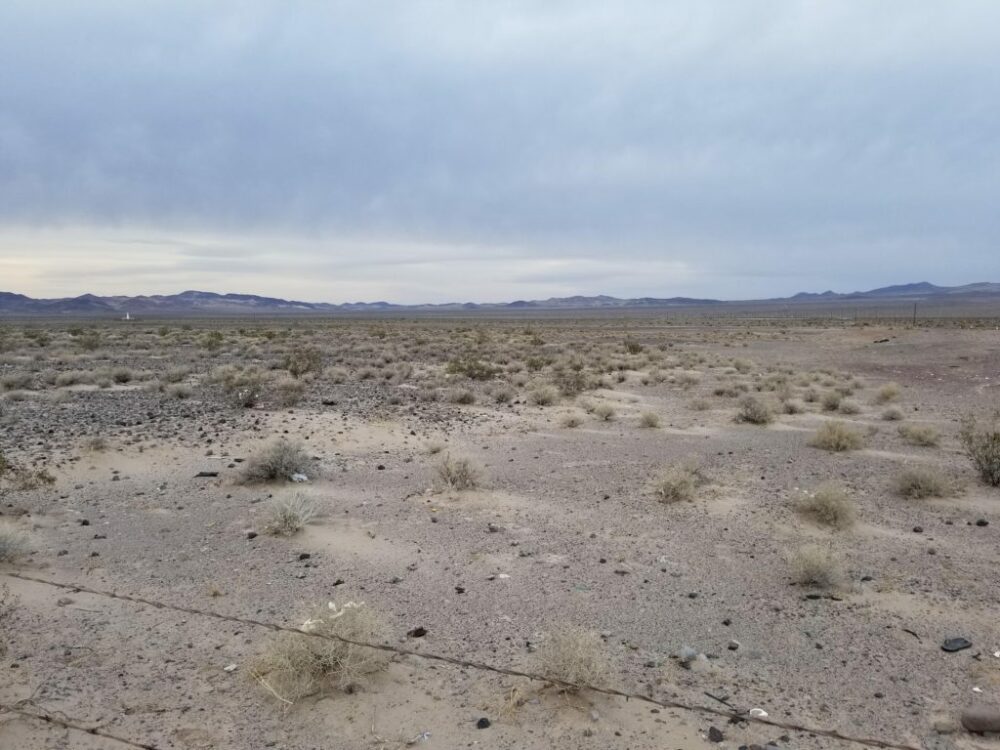 West of Needles about 20 – 30 miles. Does this fit anyone’s stereo-typical view of CA?

California has sections of Route 66 left but spent more time on I-40 than on Old ’66. At one point, the road was closed for construction, detouring on I-40. By the time I found a way to get back on it, there were only about 7-8 miles left before came back on I-40 again. Nearly Barstow, end of day stop, hit I-15 as well. Tomorrow will be likely into Pasadena. Then Santa Monica on Tuesday!

Bittersweet that it’s coming to an end. Really enjoyed the trip and rediscovered how much I like road trips. Planning a couple of posts while I’m in LA getting ready for the trip back. One to give an overall mostly factual summary of the trip and another to “reflect” on the trip, high points, new experiences, “lessons learned” so to speak.

And I’ll continue to post on the way back home as well. Have a few places to go as well when returning the 2000+ miles.

That’s all for today folks….