Already spotted a correction from Day 6. I started in Springfield MO, not IL.

Saw a few sites in Tulsa. Cold and windy so skipped a few outside sights (can’t see everything)! I’ve included a picture of Praying Hands from Oral Roberts University and a medical building across the street. The Praying Hands were originally in front of the medical building that was City of Faith, built by Oral Roberts. Keeping with the philosophy, each patient had a care team (doctor, nurses, therapists) and a Prayer Partner.

The center building was the hospital (777 beds of course), the right building was a clinic and the left was to be a medical research center. Due to a number of reasons, among them an over estimate of how many people outside Oklahoma would be attracted and changing health care reimbursement patterns. The medical center never operated near capacity and ran large deficits every year. The medical center opened in 1981 and closed at the end of 1989.

The reason I’m bringing it up is that I was here with a group from St. Luke’s Hospitals in Fargo. We were choosing new software and one of the finalists had theirs installed at City of Faith. (My boss (Dan Marren for those who knew me then) HAD to see City of Faith!)

There wasn’t anyone else there to take a picture of me being swallowed by the Blue Whale at Catoosa OK so I had to do a selfie and try to look terrified that I was going to do a “Jonah”. (I see that I have a stick growing out of my head!) 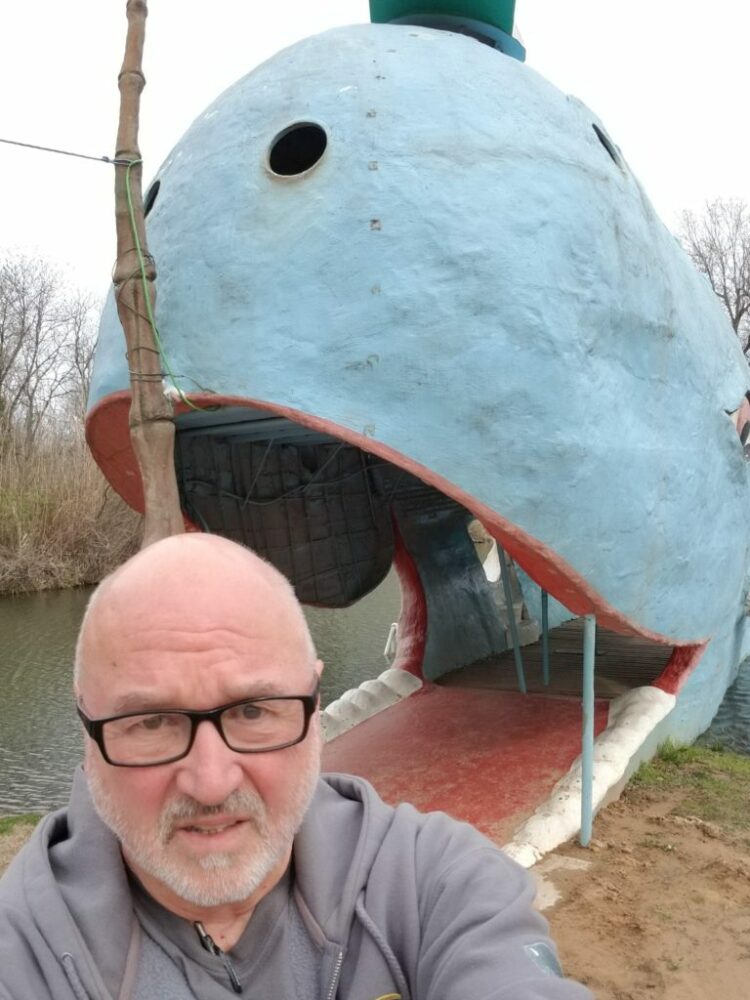 Another park in Tulsa is still being built. There were some trains there and this 190+ foot oil derrick to show the role that oil has taken in the history of Tulsa.

Stopped by “McJerry’s” in Chandler OK. Jerry McClanahan. He is an artist and author He does commissioned work for people who want paintings from Route 66. Had some great ones, some from places I’ve already seen. Had a great (but short) conversation about his work and about Route 66 in general. Route 66 has been “his life” since 1981. He wrote EZ Guide and collaborated with Jim Ross to design a set of 8 maps for Route 66, one for each state. And again with Jim Ross on a photo book called Route 66 Sightings. If you want any scene painted that exists on Route 66 (or can be created with a car or something you own in it), Jerry is your guy!

Visited the Route 66 Interpretive Center in Chandler OK. The painting shown is directly on a wood wall and is in a large room that can be a meeting room or event room. The building is an old National Guard armory what was scheduled to be torn down and the town took up the cause to turn it into a museum and event center. On one end is a large room for these events. The afternoon I visited, the room was being prepared for a “Daddy Daughter Dance”.

In the room with most of the displays, part of the floor is tiled with a map of the county.

On down the road in Arcadia there is a round barn that has also been restored by the community. The first floor is a museum and gift shop and the second floor (hay loft for those of us who grew up on farms) was an event center. While I was there, it was being prepared for a birthday party.

There is so much pride and enthusiasm by all of these people and communities who raise money and do work themselves to continue to celebrate this great road by maintaining and restoring these great attractions. Of course some communities haven’t recovered from losing Route 66 and some are only ghost towns left. But many are finding ways to thrive. Probably a sports analogy but thought of “Eye of the Tiger” by Survivor and from Rocky III.

Ended the day in Oklahoma City. Haven’t done any sight-seeing yet but will see what I can in about 6 hours or so and then drive part way to Amarillo.

I’ve had some thoughts while driving the last few days:

1. Between Springfield and Carthage MO, there is about 40 miles of Route 66 where you won’t see I-44 more than a couple of times when you cross it. The road meanders through the country side and small towns. The terrain becomes somewhat flatter as the road moves toward the edge of the Ozarks.

2. Observation: there are more brick houses and other buildings here than are typical on the rest of the road. The older buildings as well as the newer ones.

3. The far corner of southwest Missouri, the southeast corner of Kansas and the northeast corner of Oklahoma is mining country. Much of Lead and Zinc in the US came from that area. As typical for mining, the supply ran out and some of the towns died. Others are showing the Spirit of Route 66 and are thriving.

4. Just wanted to mention Joplin MO before moving on. Nice looking downtown. It’s old but store fronts are well-kept and trees have been planted along main street. Another town that seems to be thriving, although it is situated right next to I-44.

5. Galena KS is a mining town as well and claims some influence on the movie “Cars”. There is a small display of several cars at an old service station and has a car door that says “Radiator Springs”. Much of the inspiration for the move came from Route 66 but most of it was further west in New Mexico, Arizona and California.

That will have to do for today! Looking forward to tomorrow.