Windy here today. Heard it’s always windy. And very flat. Much like the Red River (of the North) Valley. I know, the Red River down here is more well-known. Evening time, great steak, etc. Back to the beginning of the day.

Hit Texas shortly after leaving the hotel.  Not much to see but land, trees and sky from Sayre to beyond the Texas line. Somebody needs to clean the sign! 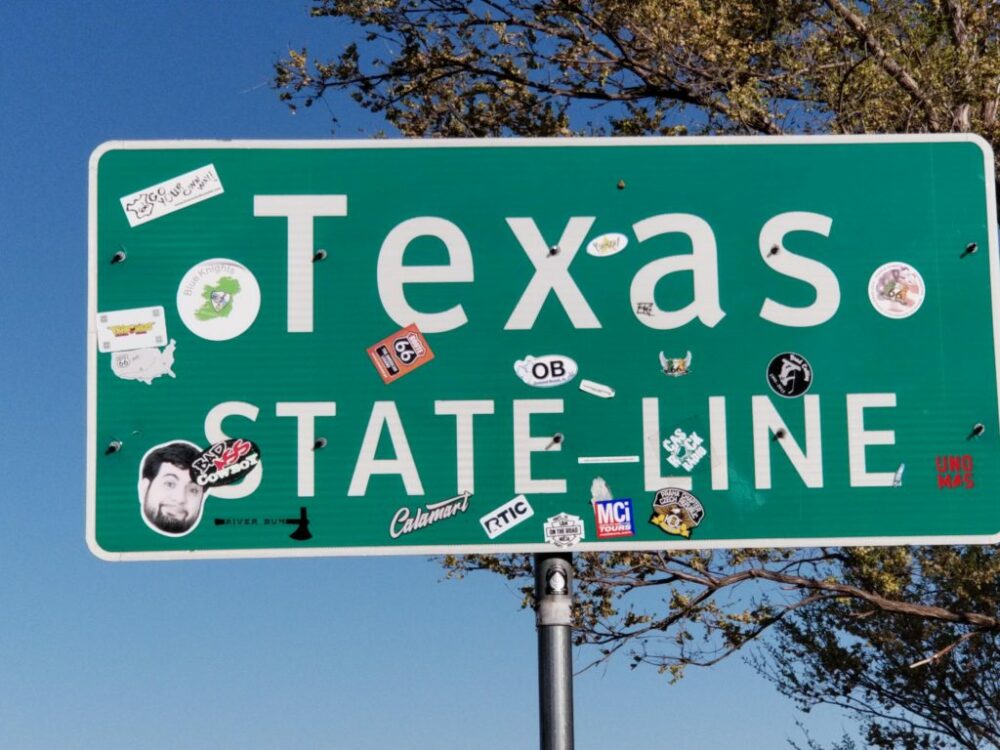 Hard to see but following are a couple of detail pictures. This is on a roadside low wall in Shamrock. (Yes, I did get out of the car to take this picture!)  Below are 3 additional detail pictures for the start (Illinois), approximately middle (New Mexico) and end (California) unless you start in California! I know the center  is officially in TX but I liked the NM picture better.

Was also going to take a photo of another gas station but there were about 15 to 20 people gathered around it. 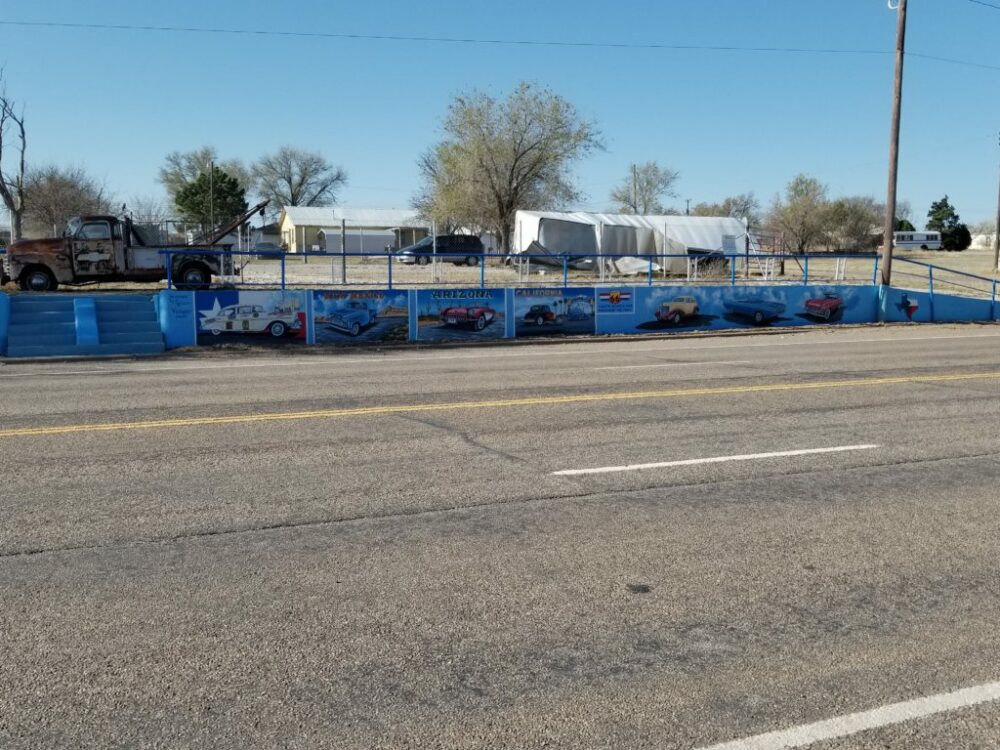 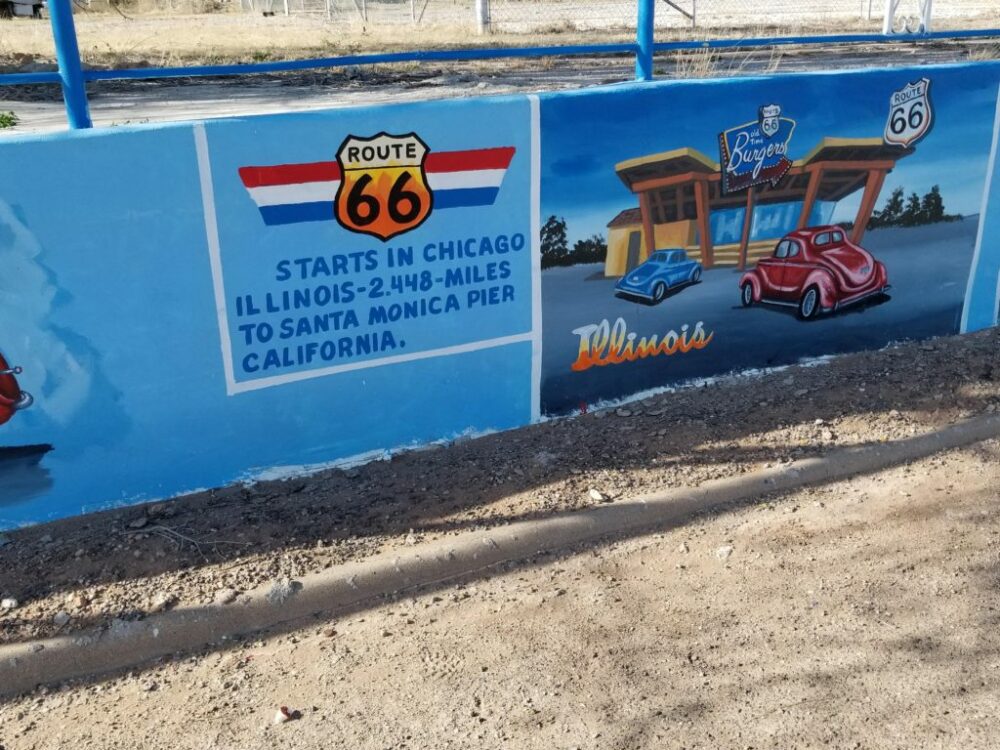 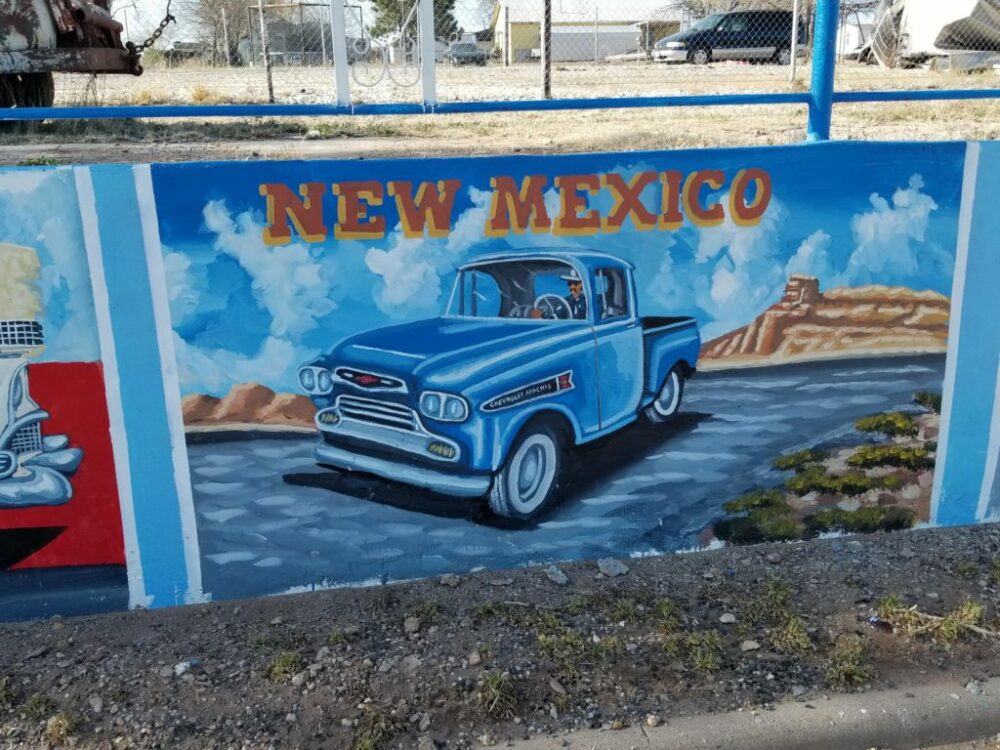 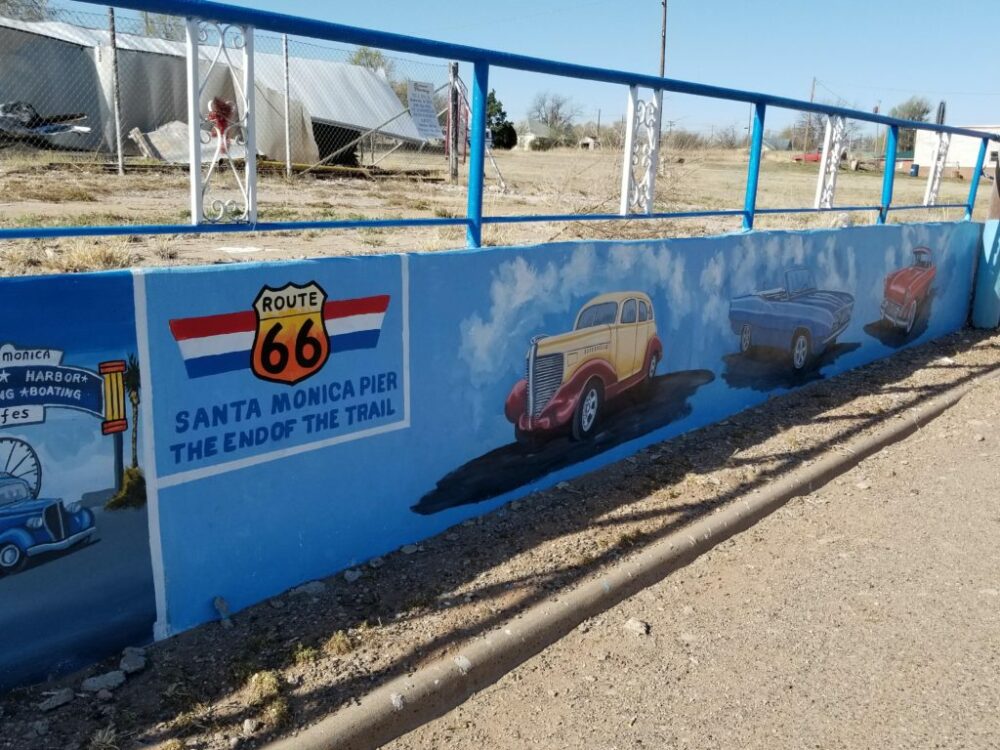 Have a number of restored gas stations so thought I’d show you that not every gas station along the route has been restored! 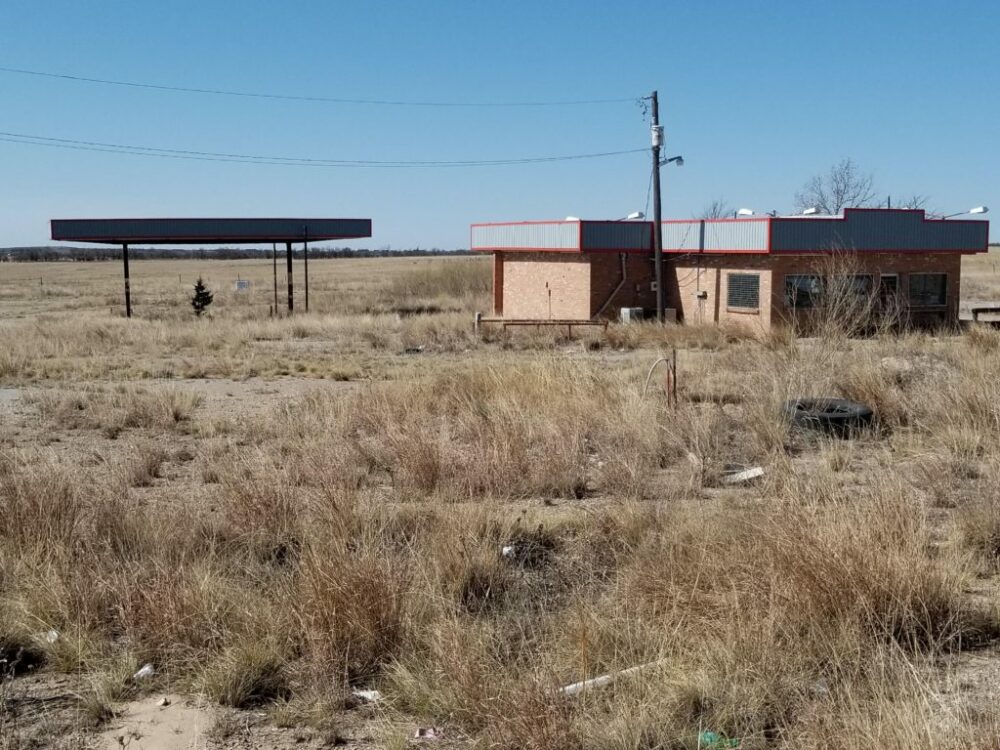 Did you know that Texas has cattle! 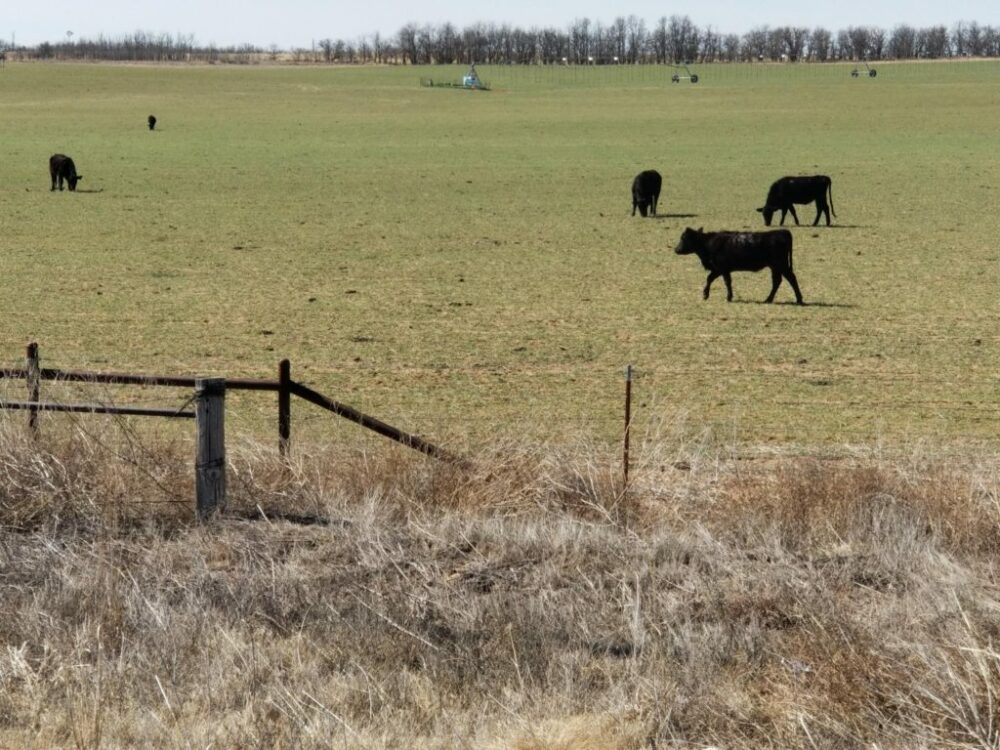 …and another restored gas station in McLean TX 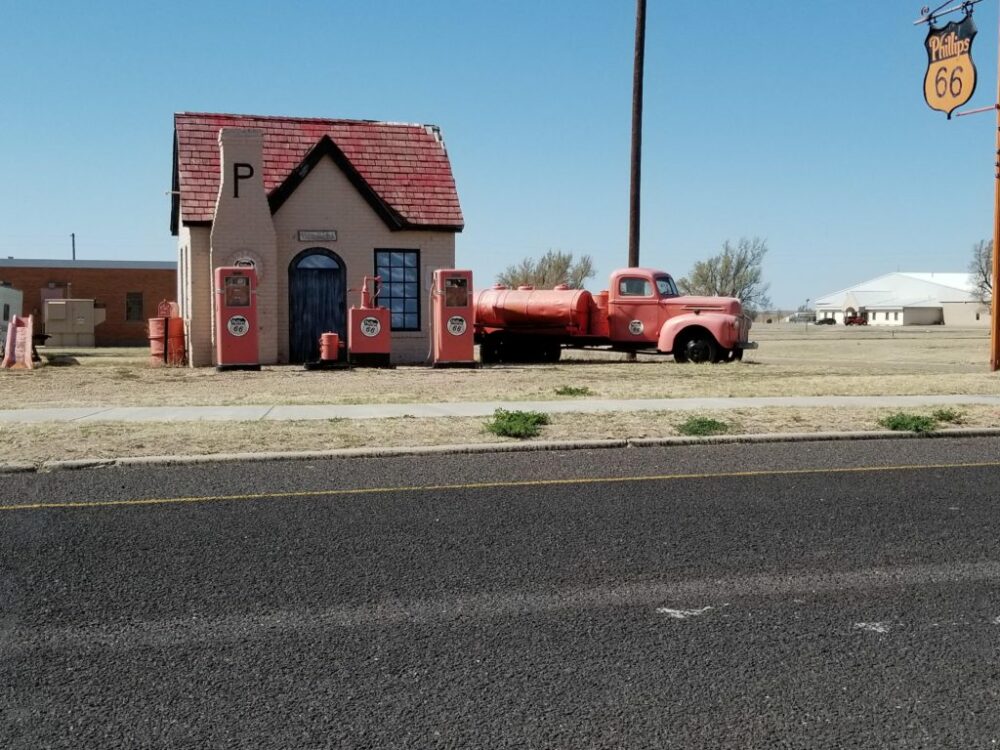 Did you think there would be a tribute to barbed wire? Also in McLean. 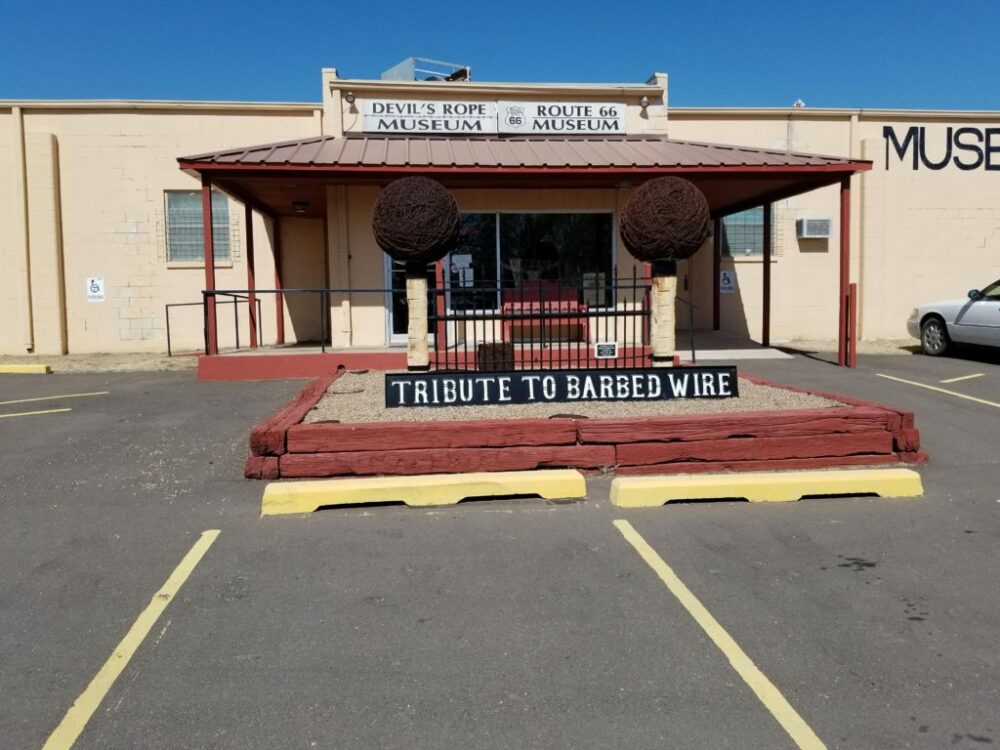 …and a horse and rider made from barbed wire 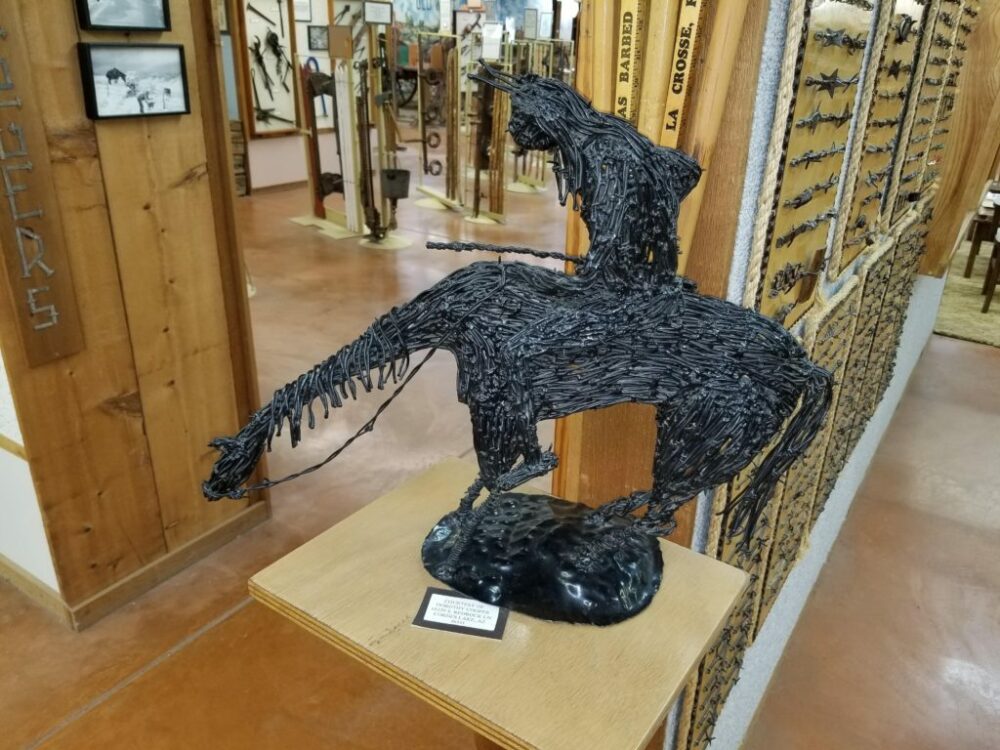 Here’s another “Texas-ism”. A maintained but not restored gas station?!?! 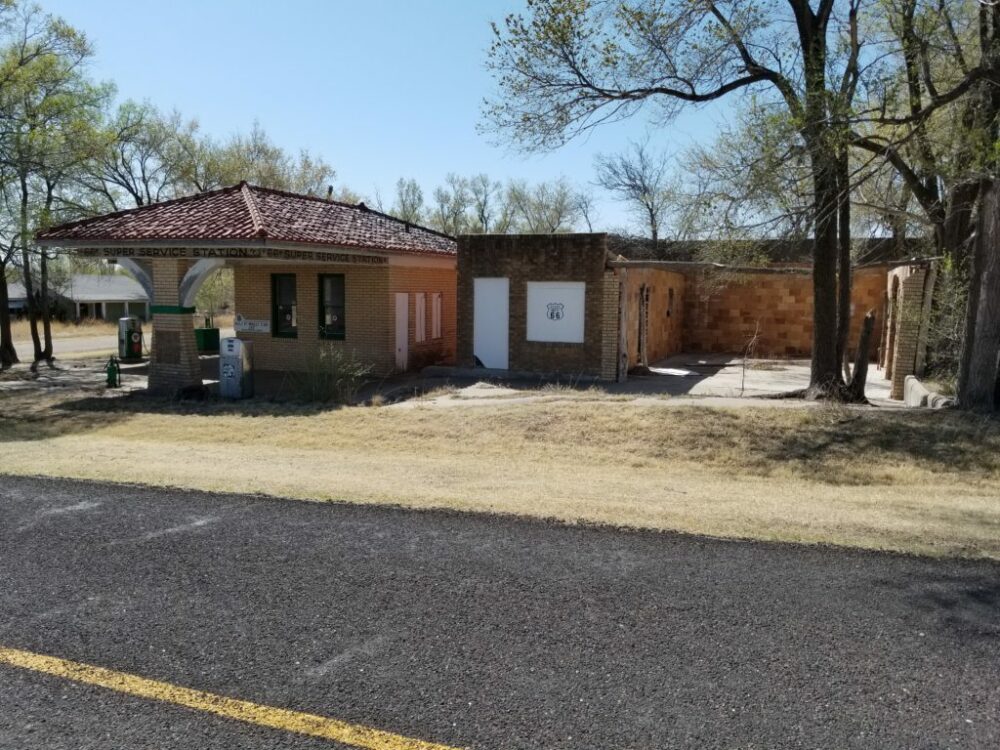 …and the “Leaning Tower of Groom”. Built that way to attract attention. 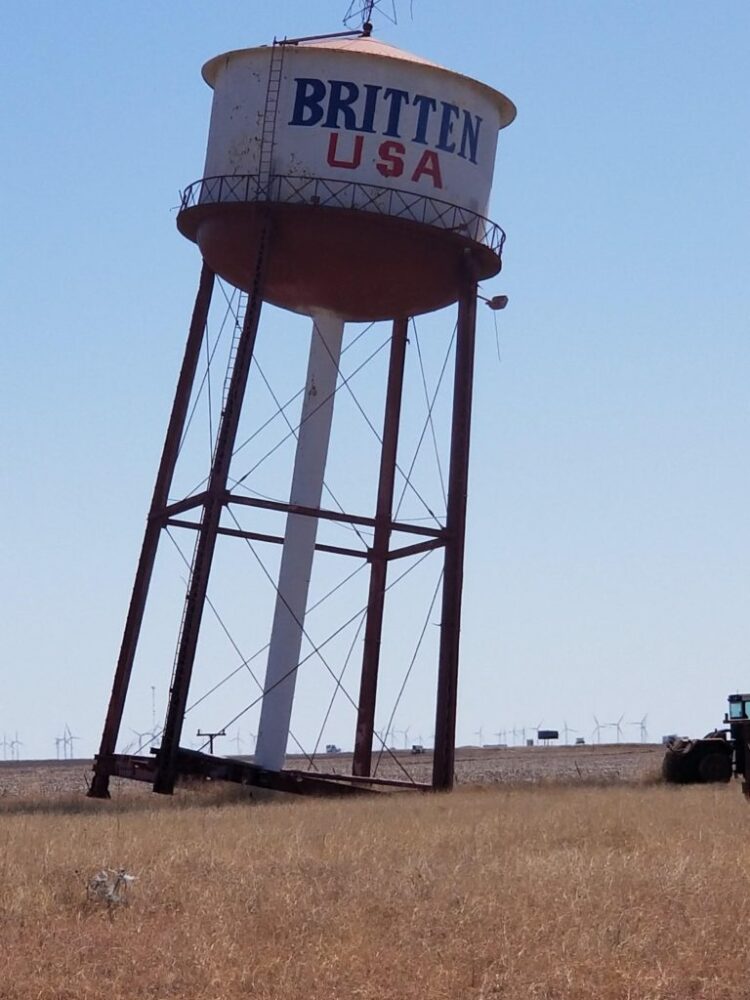 Going to transition to a more serious subject.

Need to leave some space to change the mood.

This is the 190 feet tall “Cross of our Lord Jesus Christ”. This is just west of Groom.

Also included are the 14 Stations of the Cross shown in statue form around the base of the cross. On one side are the statues of the three crosses. I’ve included the picture of Jesus on the cross. Done very respectfully. It is out in an open area so nothing around this and the building there for support and maintenance. It looks startling to see this out on the prairie. 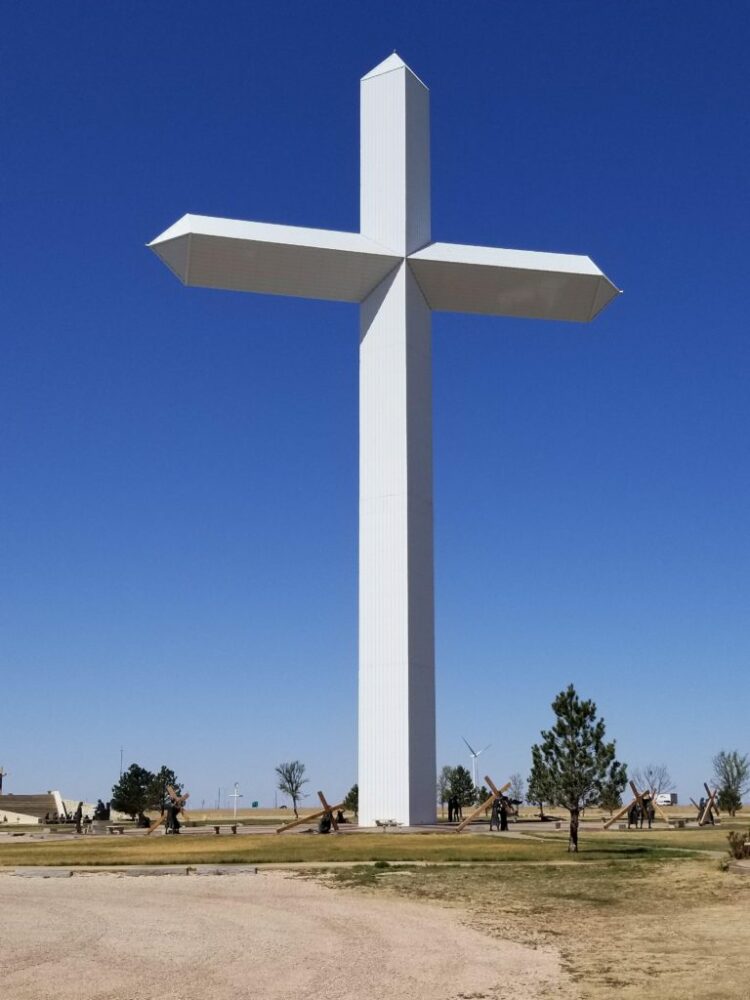 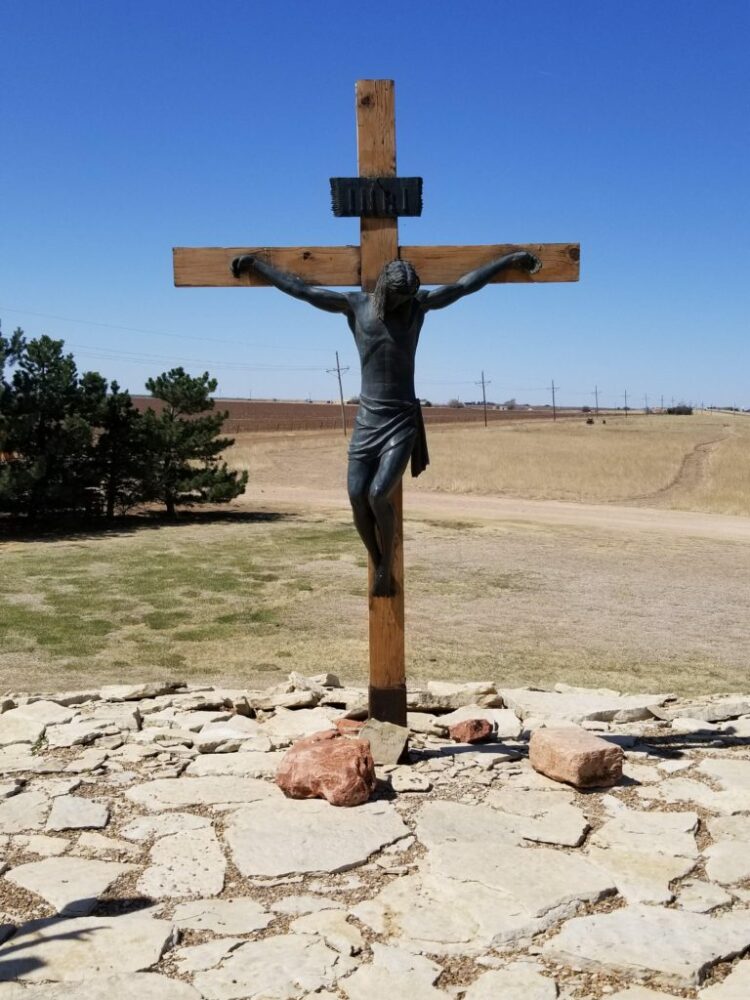 Transitioning again. Trying to maintain a respectfully distance between this and the next pictures.

And inserting a peaceful scene. 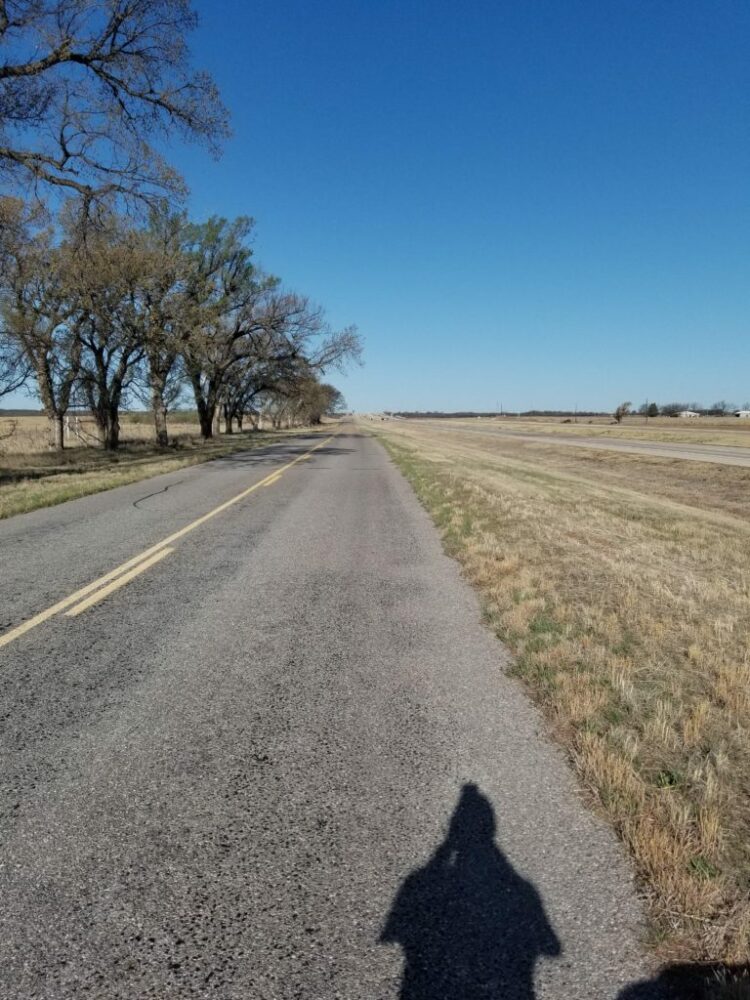 This is in a ghost town. Only 3 buildings and these cars, plus the sign shown below. Meant to be a satire (is that the word?) of the Cadillac Ranch.  One of my resources refers to  it as being in “Panhandle TX” but doesn’t show on the map. Maybe just because Route 66 goes across the TX panhandle. (By the way, how many states have panhandles?) 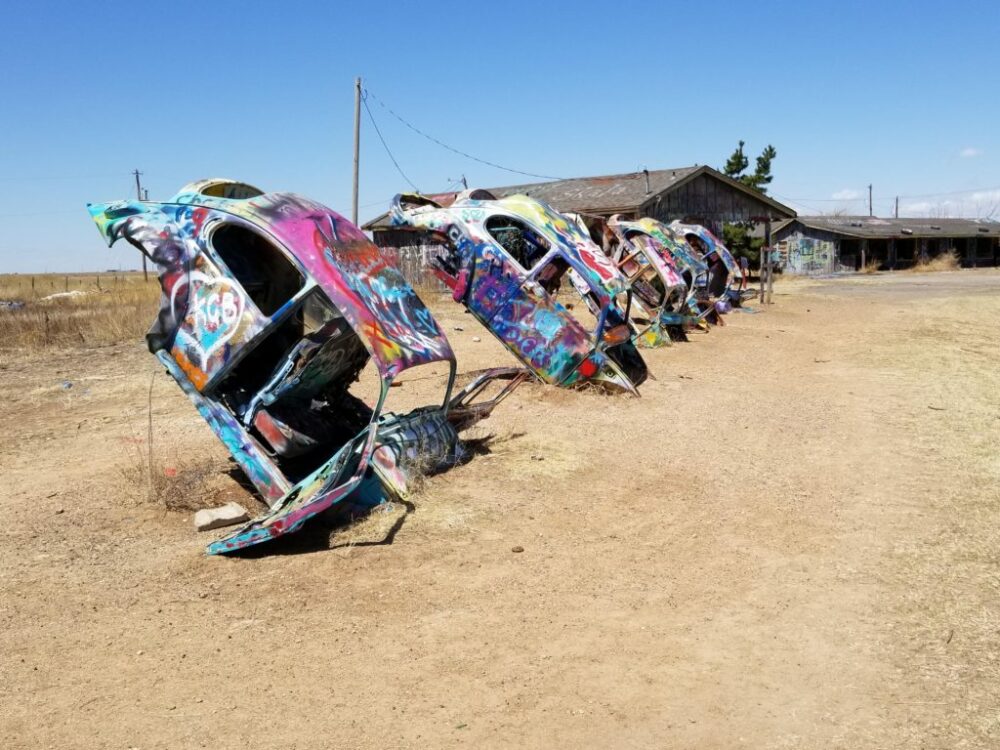 This sign is on the other side of the buildings away from the cars. The buildings also have “haunted” painted on them. 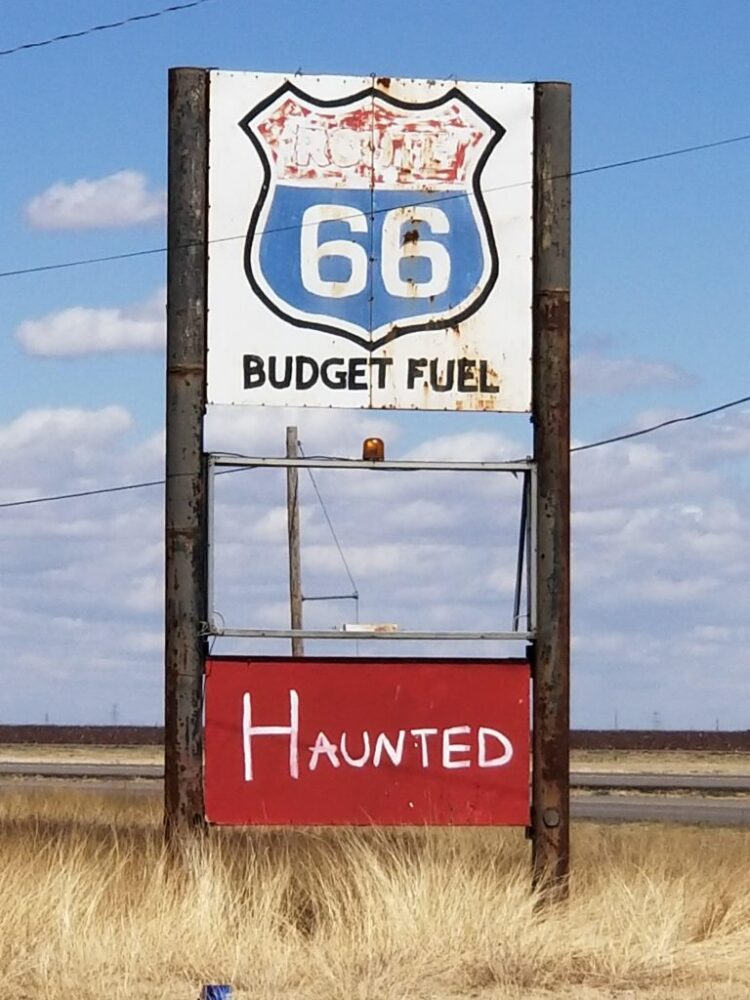 …and this is the “world famous” Cadillac Ranch” just west of Amarillo. A local eccentric millionaire hired an artist company called Ant Farm to put the exhibit together. Graffiti is encouraged! There are a lot of empty or just discarded spray paint cans left around the site. It is out in a field about 100 yards from Route 66. Lots of people stop. While I was out there, a woman asked me to take her picture with some graffiti she had done. We talk about and she told me she was from France. Her children had paid for the trip for her 50th birthday! She is spending 3 months in the US and much of it along Route 66 starting in LA and ending Chicago. She was amazed that she would actually do graffiti. She said she didn’t know of anyplace in France that allowed it. (There was a sign on the fence by the road that outside the fence as the state of Texas property and now graffiti was allowed,) And here is a link to another post about many strange roadside attractions in America.

Ran into a group of bikers (Harley’s with the leather and all) and struck up a conversation.  They were from Brazil. Had flown into Chicago, rented bikes and would end in Albuquerque and go back home. (No, I didn’t ask “Why Albuquerque?) 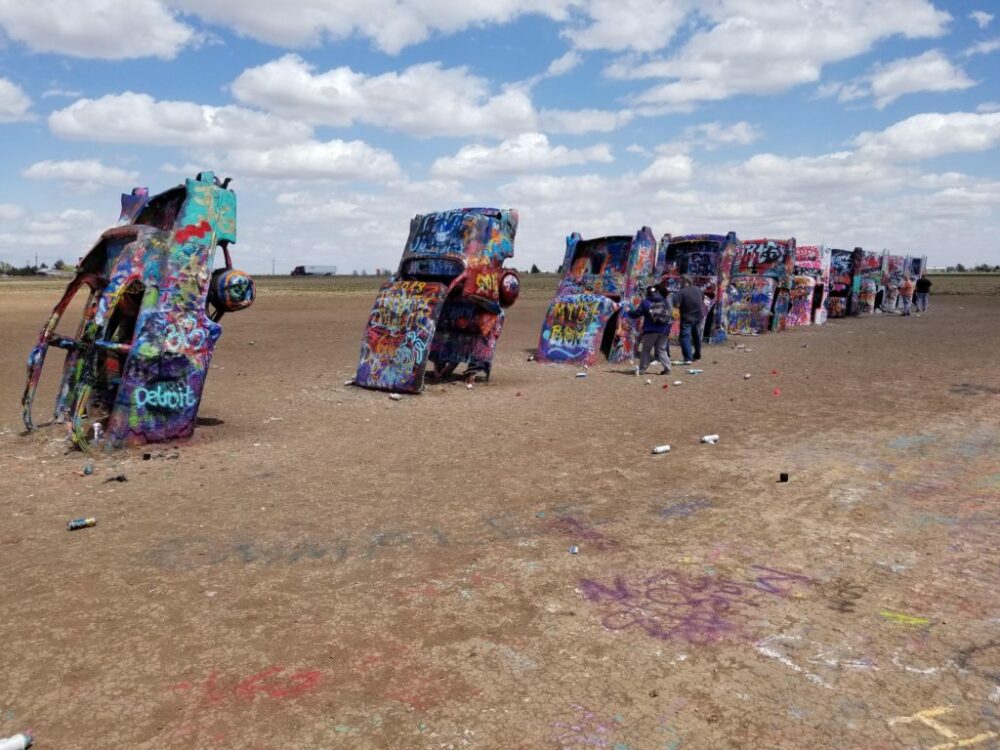 To remind all to be careful out there… 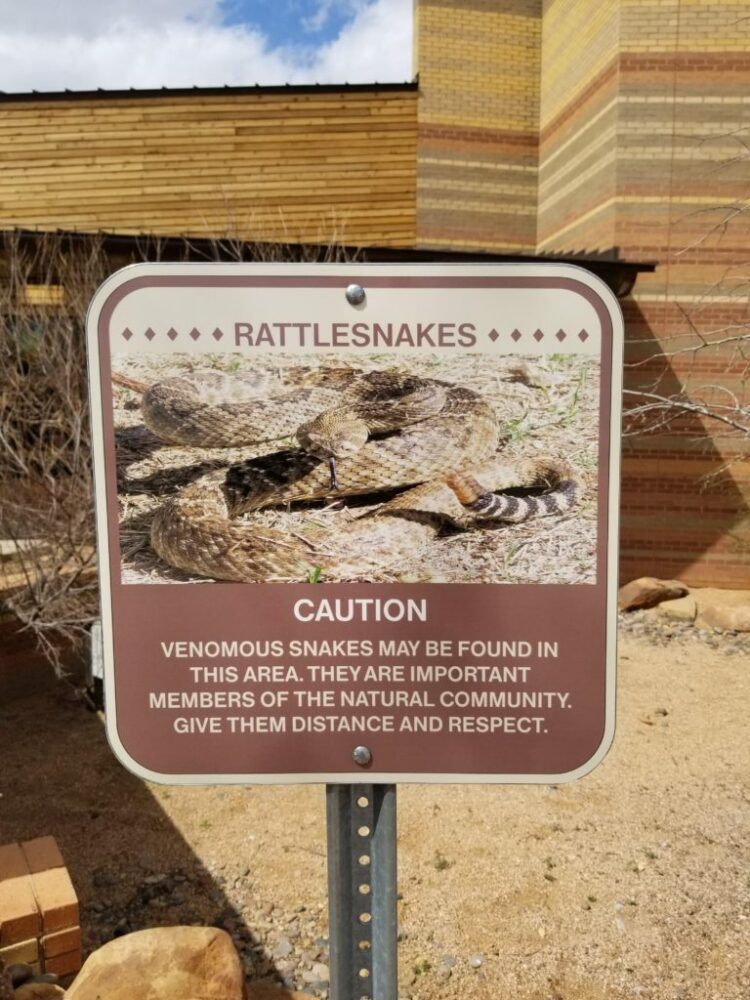 Went to dinner at the Big Texan Steakhouse. Great dinner! If you saw my Facebook post, you’ll see that I had my vegetables as well! (Carrot cake)  Positioned the cloud so it looks like he’s steaming! 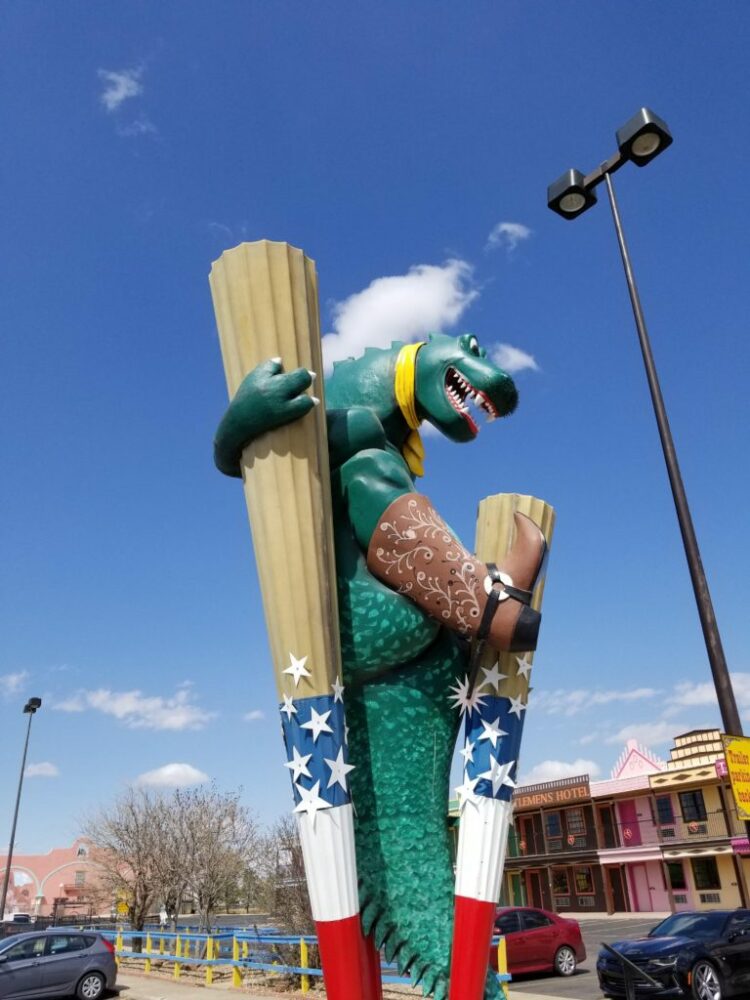 And, of course, need to have a cowboy if in Texas 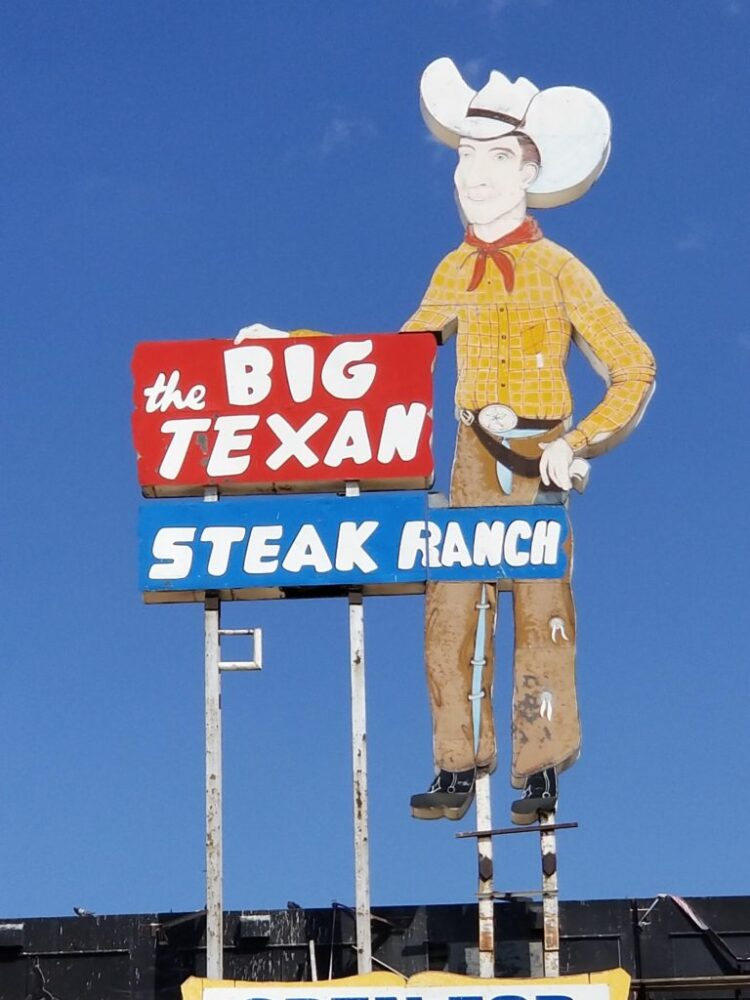 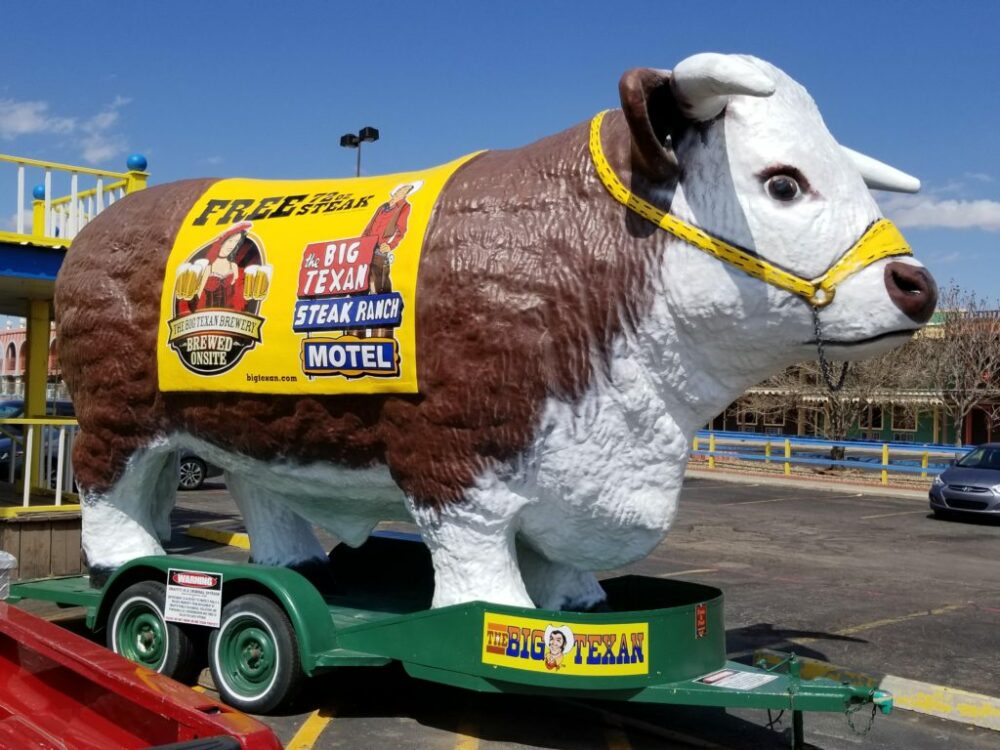 Had a great conversation with the server as he wasn’t busy as I came in at 4 PM. Told me he didn’t want me to think he was “stalking” me but he did stop by about every 4 to 6 minutes. Once he even sat down and we talked about “life”. (And he said he’d look at my blog when he got home!)

Today was a good day, as they’ve all been. Best part was that it’s finally warmer. Unseasonably cold all along the route until today. (Had a day in Illinois that hit 75 degrees and within an hour or so was pouring rain and temp dropped 20 degrees and went down to near freezing overnight.

One more stop in TX tomorrow and then on the New Mexico. Would like to make Santa Fe but depends on how much I see along the way.

The only rock song that came to me today that might fit is “The Long Run” by the Eagles, as it is a “long run” from Chicago to LA.

That’s it for today. Have a good evening and will “see” you tomorrow!