Begin Day 9 in West Helena Arkansas. Last night there were four guys outside my hotel room drinking beer and talking somewhat loudly about being done with a construction job. They had been there about 6 months without being home and were leaving the next day for several different states. They told me they’d be quieter so I could sleep. Told them to go ahead and enjoy their time and if they were still there when I wanted to sleep, I’d let them know. Of course, it wasn’t long and they drifted off and I didn’t see them again. Another of those 10 minute connections with people you will never see again. Nice guys, just letting of a little steam before they went their separate ways. 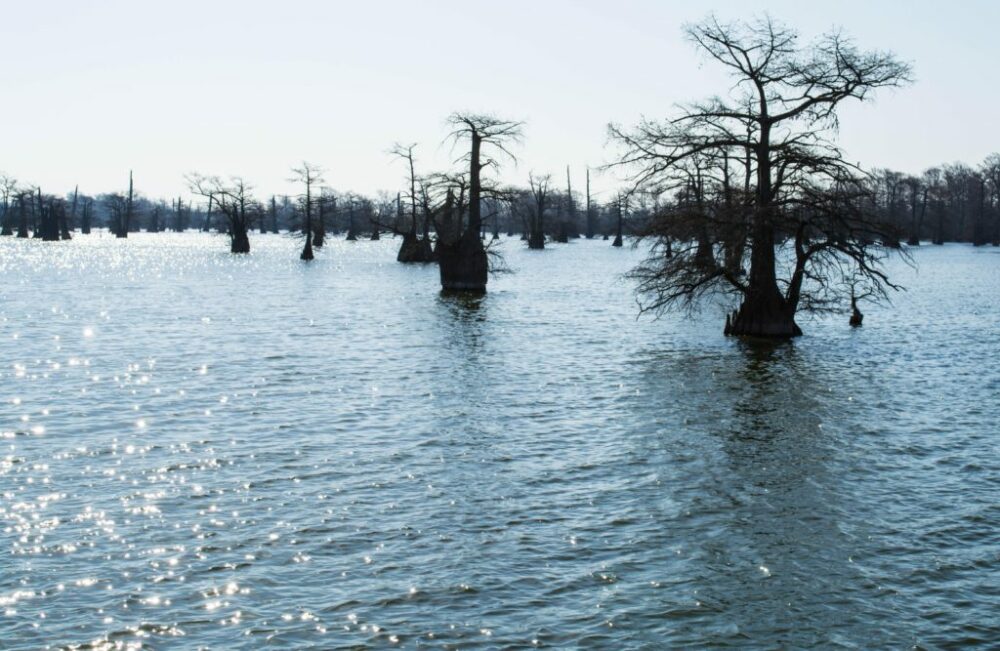 Saw a lake in Arkansas that is an Oxbow Lake. It was cut off from the Mississippi River as the river found a short cut. There are a lot of cypress trees standing in it. From certain views (and I’m sure at night) it looks kind of “creepy”. 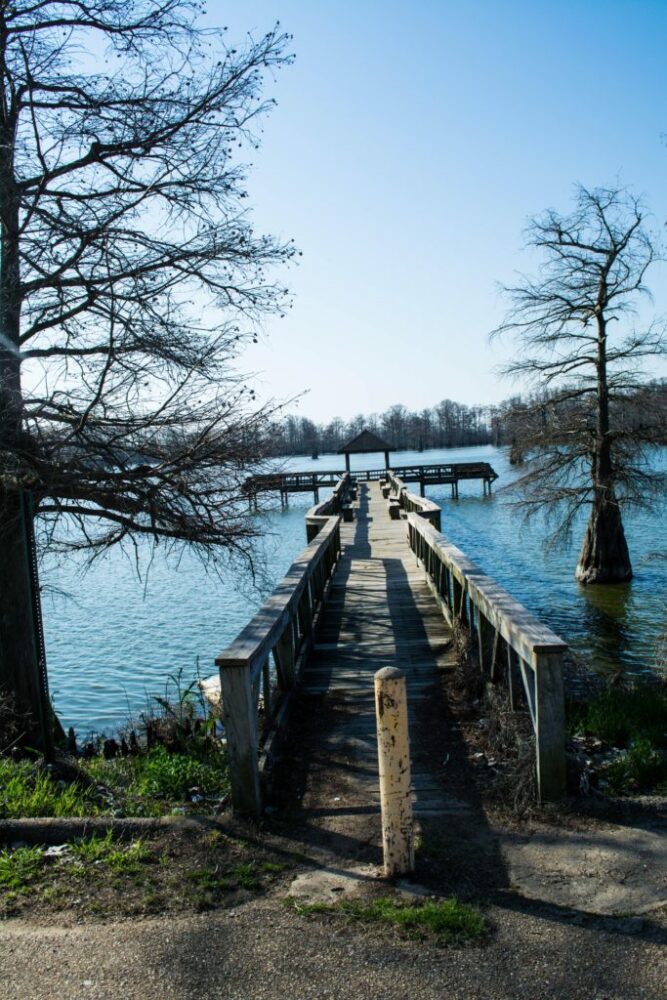 Another one of the dock into the “Cypress Tree” lake 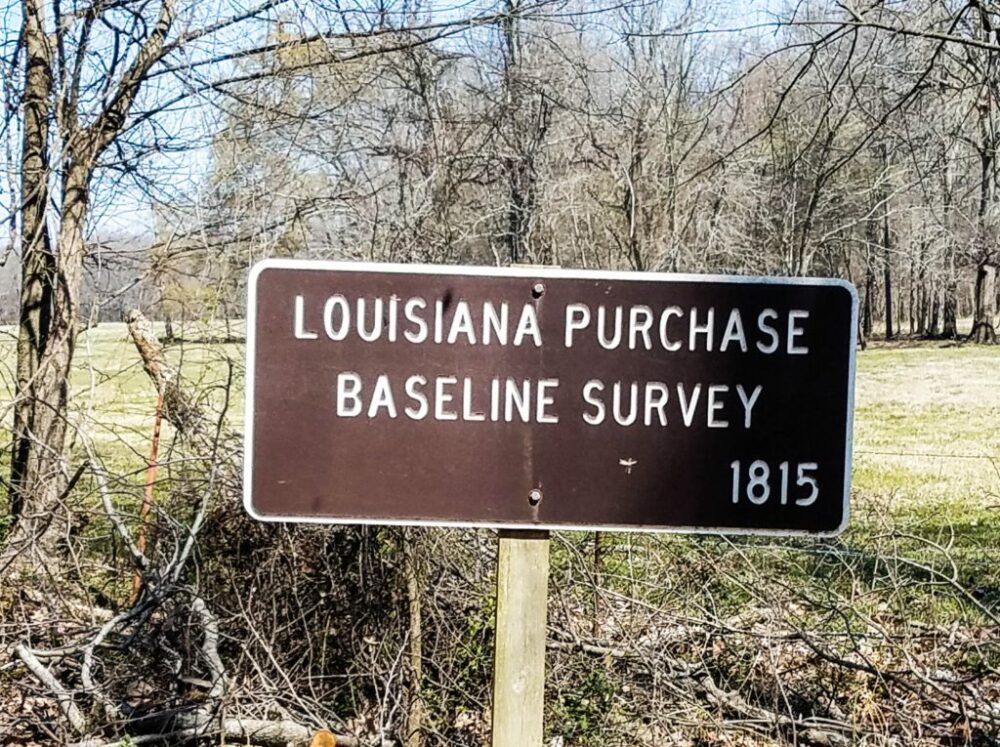 Historical reminder that all of the places I’ve been and will be were part of the Louisiana Purchase, explored by Lewis and Clark. 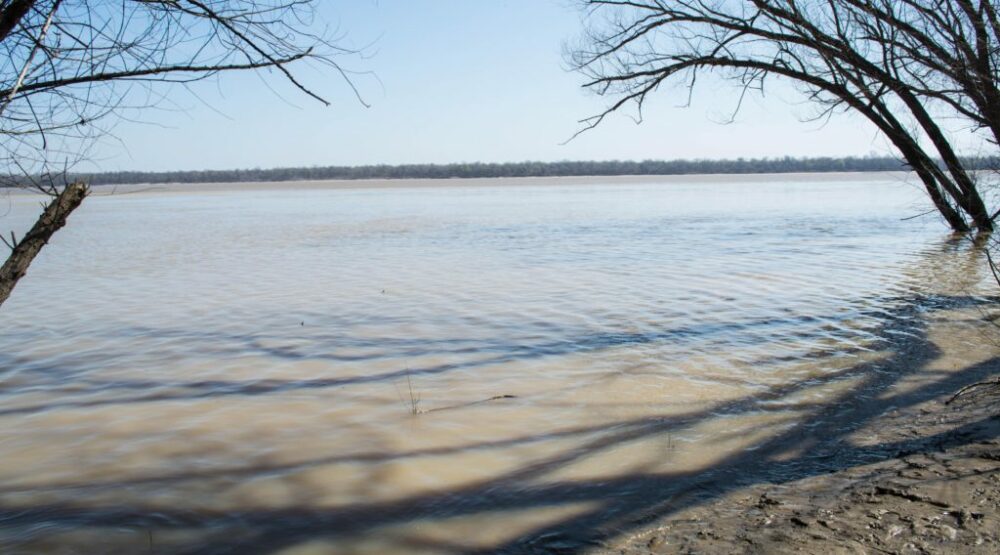 Confluence of the St. Francis River and the Mississippi. Don’t have to say too much, I just like saying “Confluence”. Don’t use that much in everyday conversation! 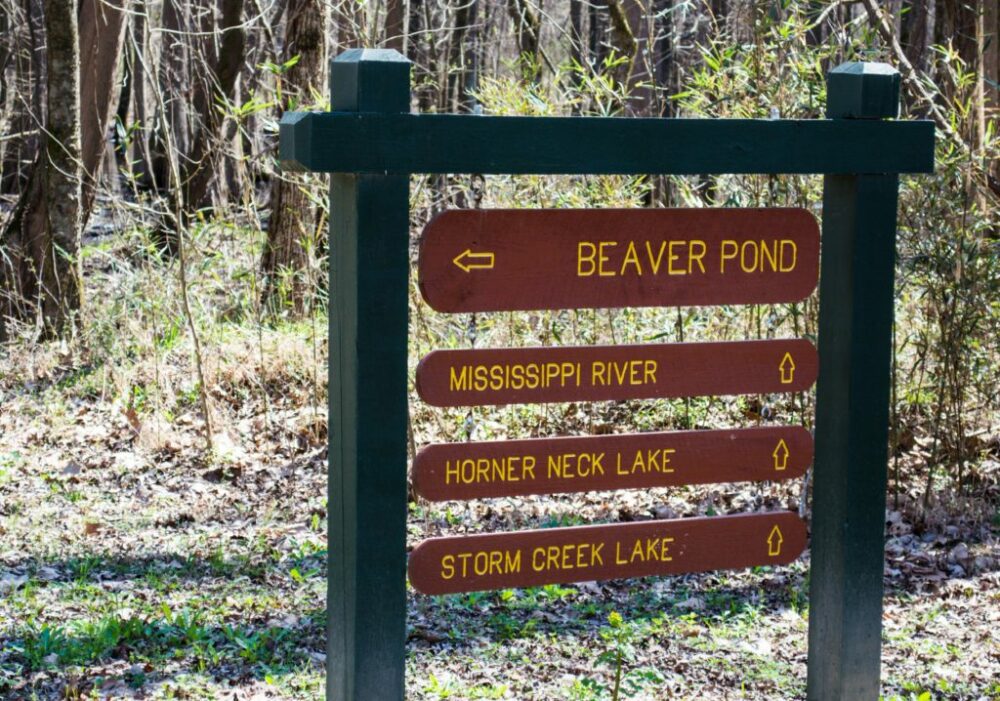 Just wanted to let you know what is around this area! 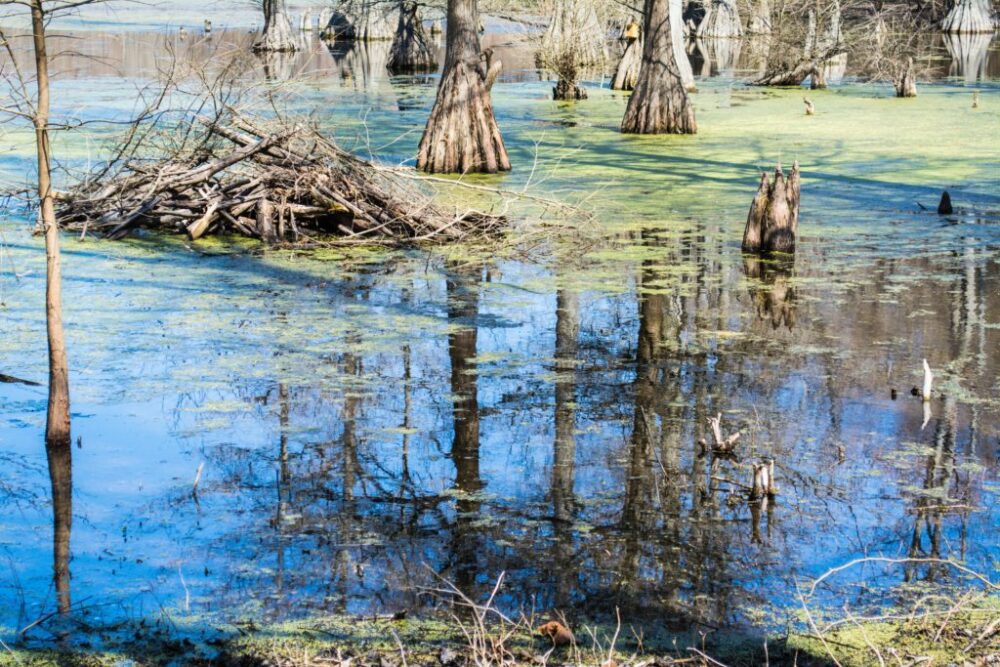 Beaver pond on the St. Francis River. Like the reflections and the contrasting colors and textures. (Used it in the picture book I made of the trip. Looked great on photo paper, hope it looks that good when you view it.) 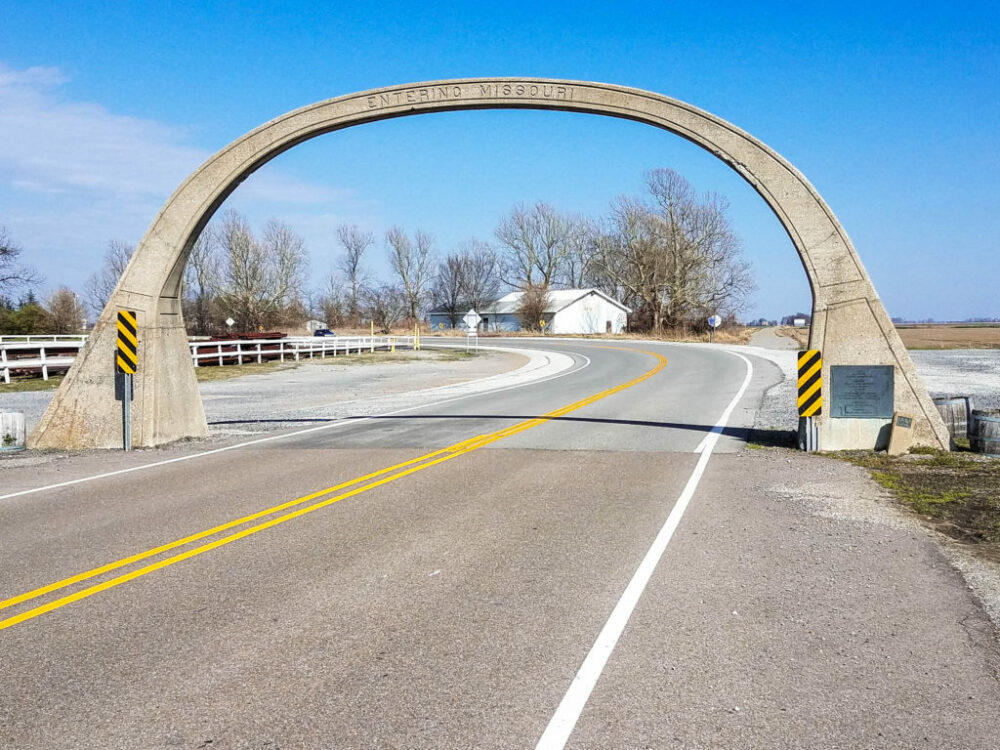 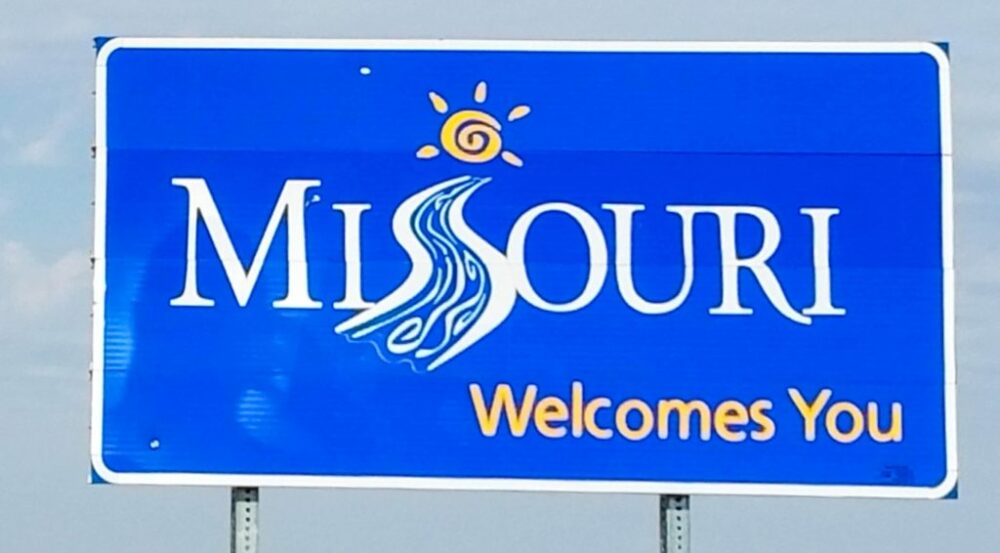 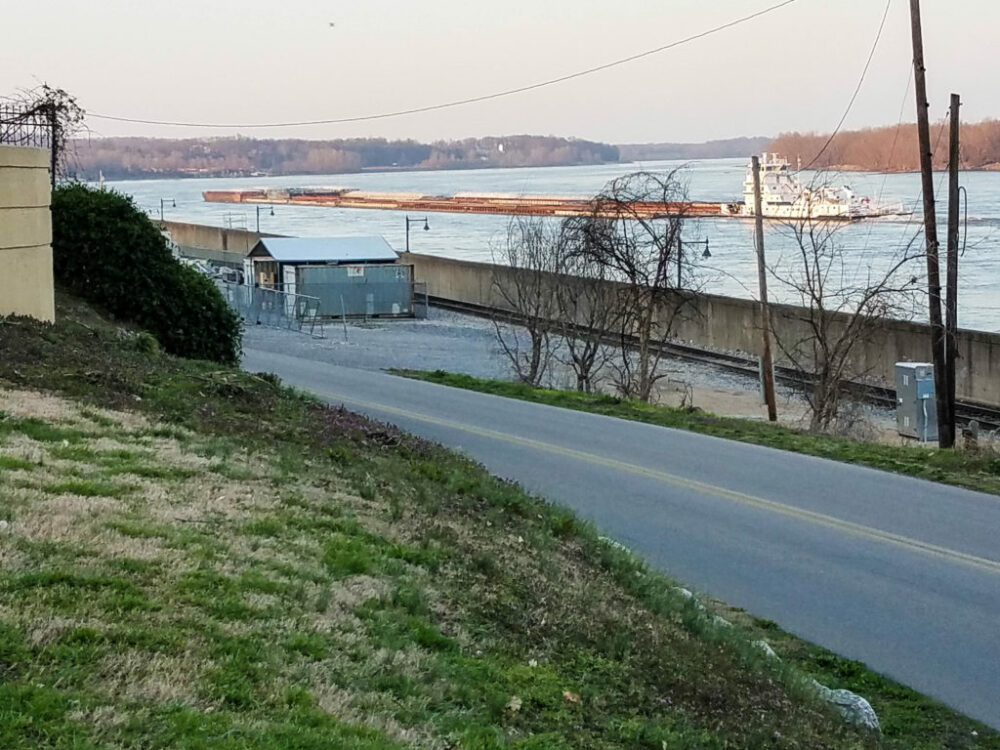 Stopped in Cape Gerardeau MO and saw more river overlook. The stop was on the University of SE Missouri campus. I talked with a gentlemen who graduated from there and now teaches high school. His daughter was at a piano lesson at the university and he was enjoying the river. Had a fun but short conversation. (See? Another connection with someone I’ll never see again!) More barges, evidence again of the Mississippi being a working river. The “Waterway of America”? 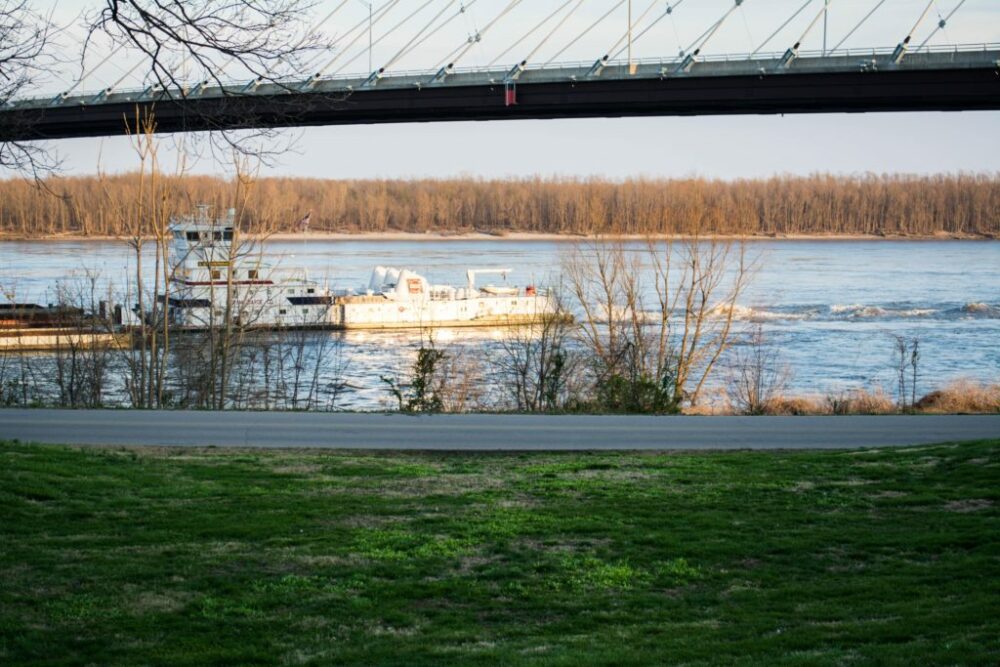 Couldn’t just leave it as one picture of a barge! 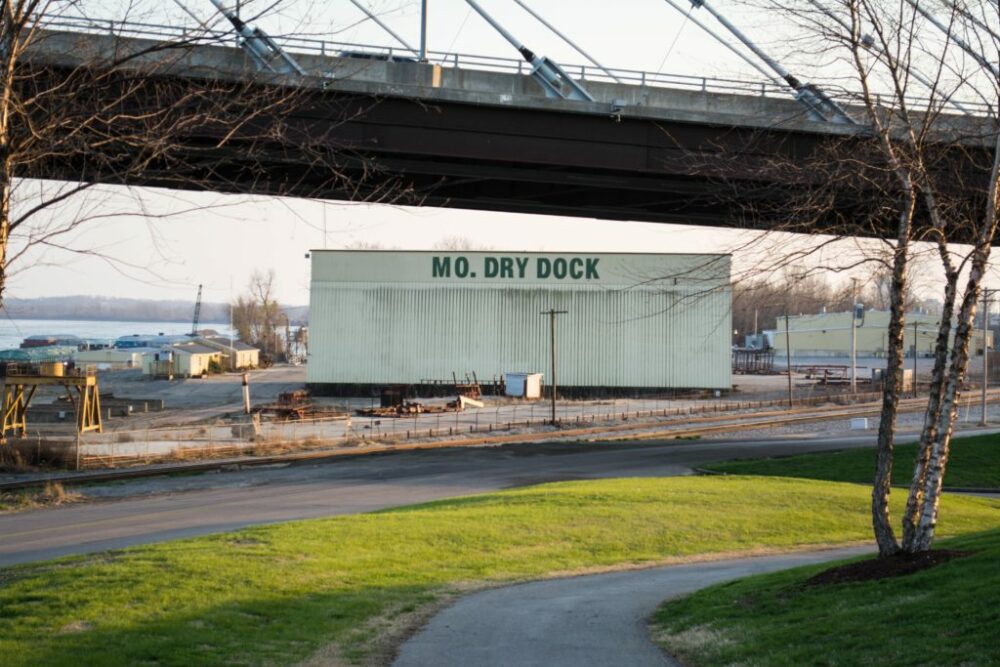 This isn’t really anything important. The story of it is:  I was viewing this from distance and with an object blocking part of the view, it first looked like “Moby Dock”! 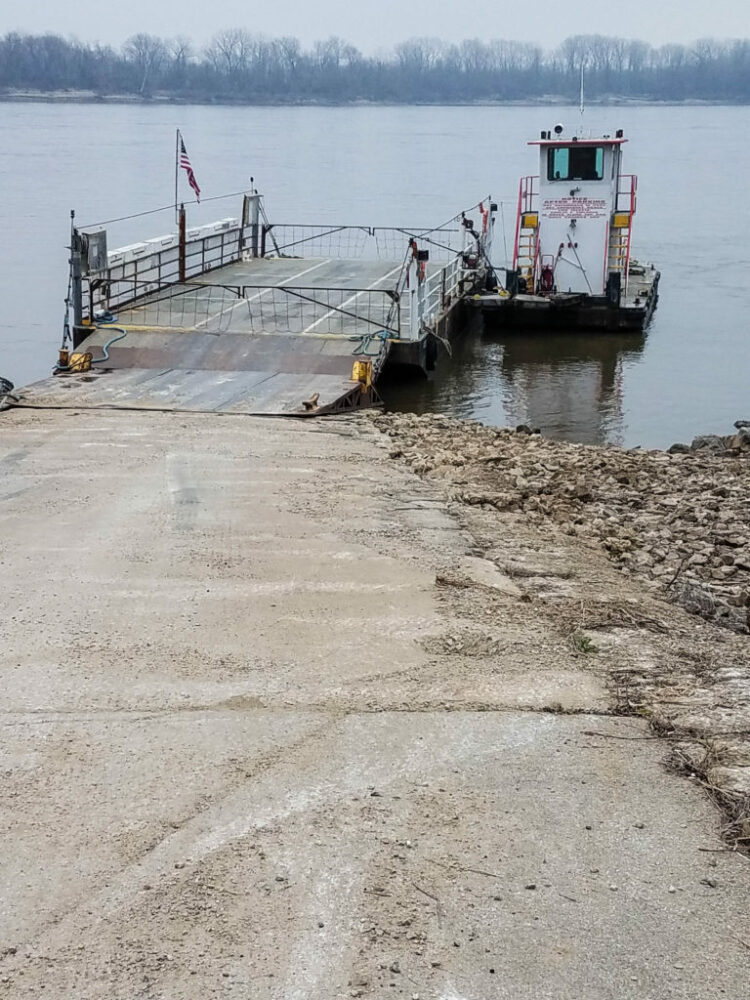 One of the original ferry boats that operated across the Mississippi. This one is still operating today. Looking back, wish I would have taken it across and back again.

I’m in Ste Genevieve tonight. It’s also a historic town so will take a look around in the AM.

I’ve found that the states with the most river views and bluffs so far are Wisconsin, Minnesota and Illinois. Haven’t been to Iowa yet but will see tomorrow. As the river gets to its southern end, the bluffs aren’t as high and there aren’t as many of them. Today, I drove thru some very flat land that is called “bottomlands”. Very rich soil but chances of flooding.

Continues to be an interesting trip with river views, small town America, river towns, other sights as well. Tomorrow I will also stop in Hannibal MO. Mark Twain’s home town.

Looks like I’m running out of steam, posts are getting shorter!

I’m sure you are all glad about that!!!

After a very quick drive through St. Genevieve MO, hit the road and bypassed St.Louis. Wasn’t easy to get to the river through there and I’d been advised some of the areas were dangerous. 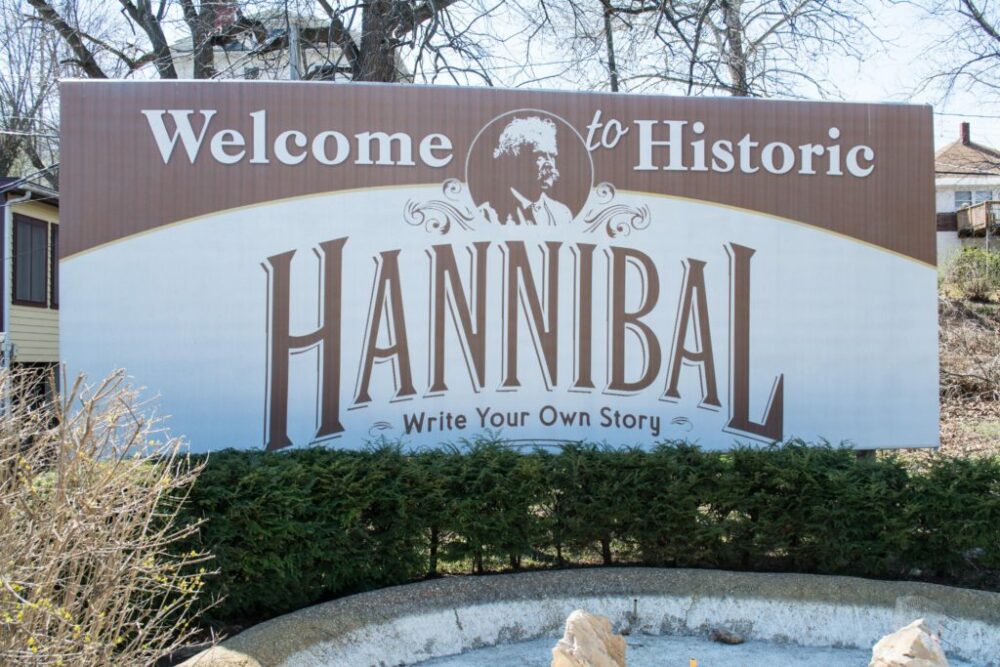 Spent some time in Hannibal MO at Mark Twain’s Boyhood Home and Museum. That was interesting. Hard to remember how prolific he was as an author and to also remember his humor as well. This area points out that his writing of Tom Sawyer and Huckleberry Finn were drawn from his childhood. Tom Sawyer was him! Lots of history here. I didn’t remember that he had written so much. He’s a true American “treasure”! 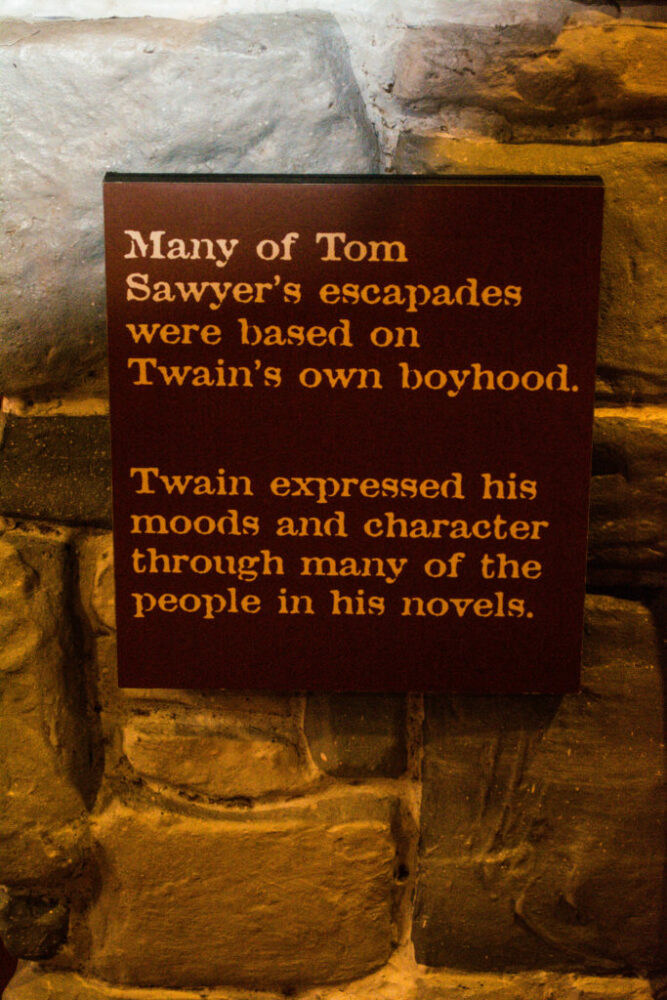 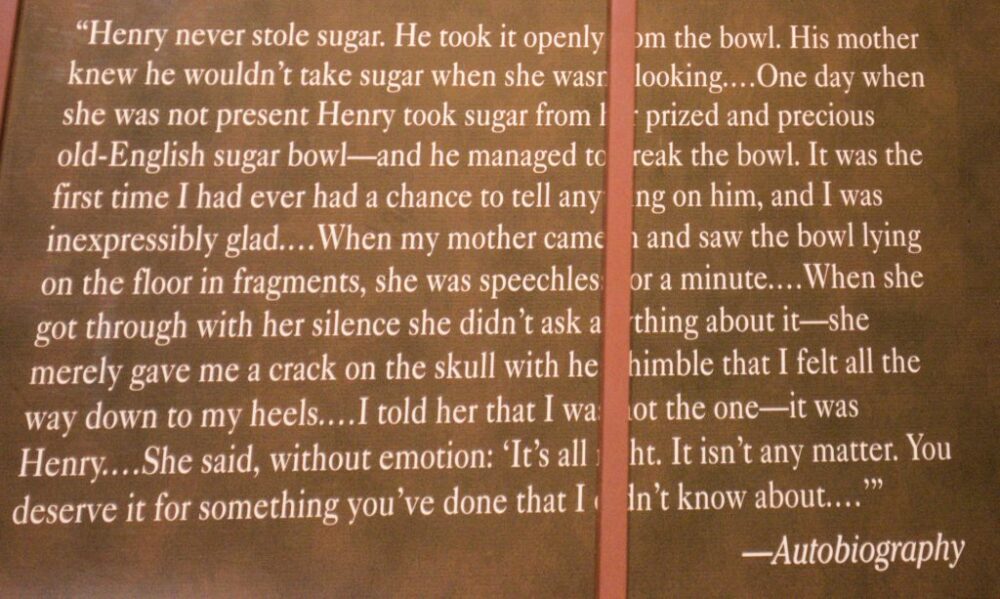 Wish I could have taken this picture without the brace in front of it. Maybe if I took pictures from two angles and then used Photoshop to stitch them together, I could have made the brace disappear! 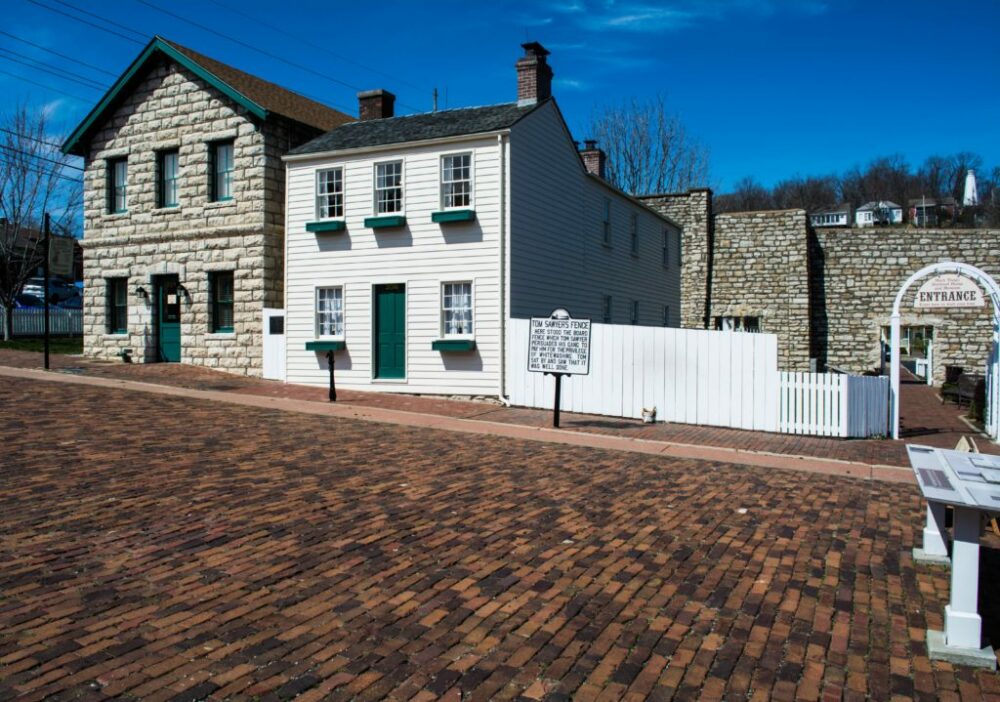 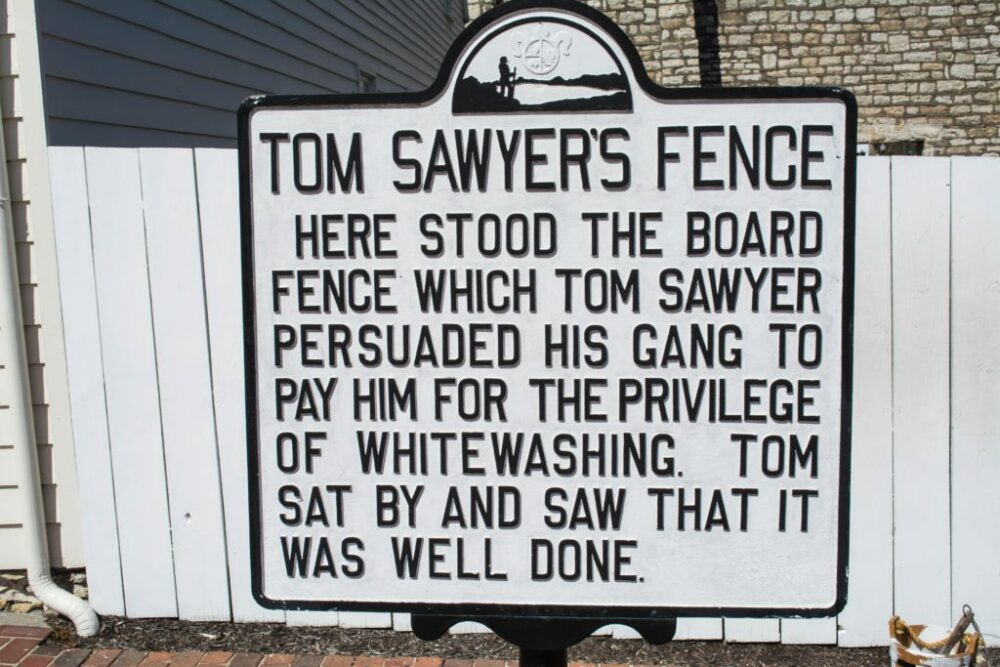 Becky Thatcher was also based on a neighbor girl from Mark Twain’s childhood. 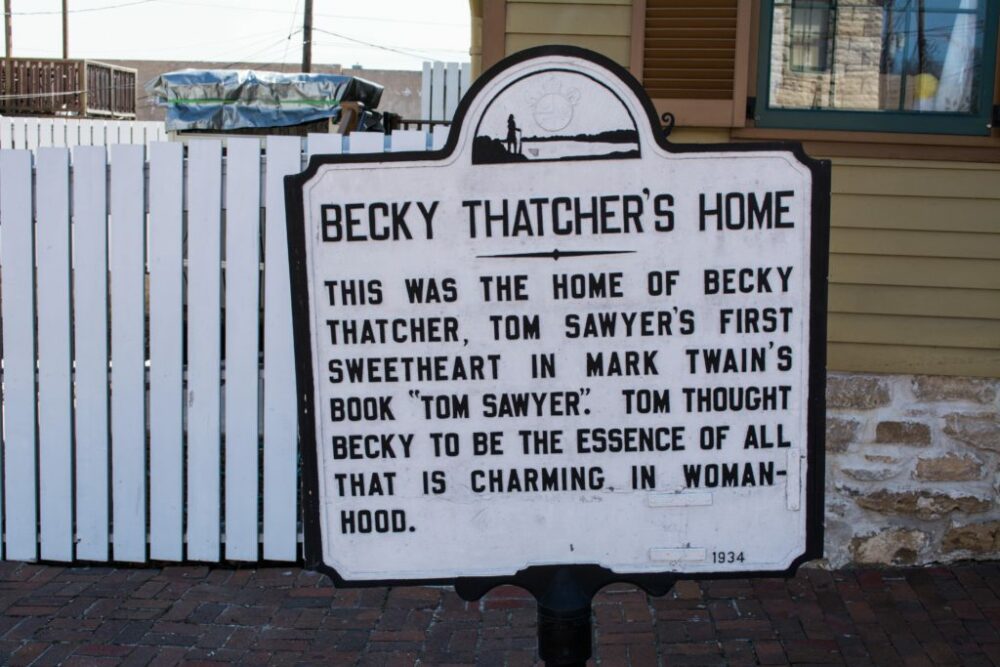 The people at the museum told me that everything in this area was restored to look like it did when Mark Twain grew up here. 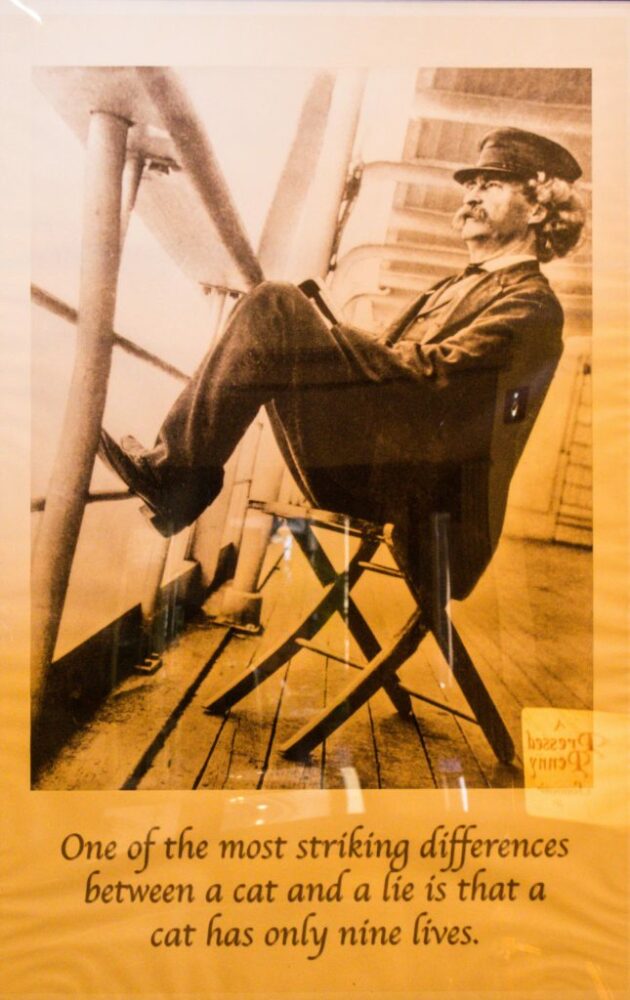 Another of Mark Twain’s sayings…… 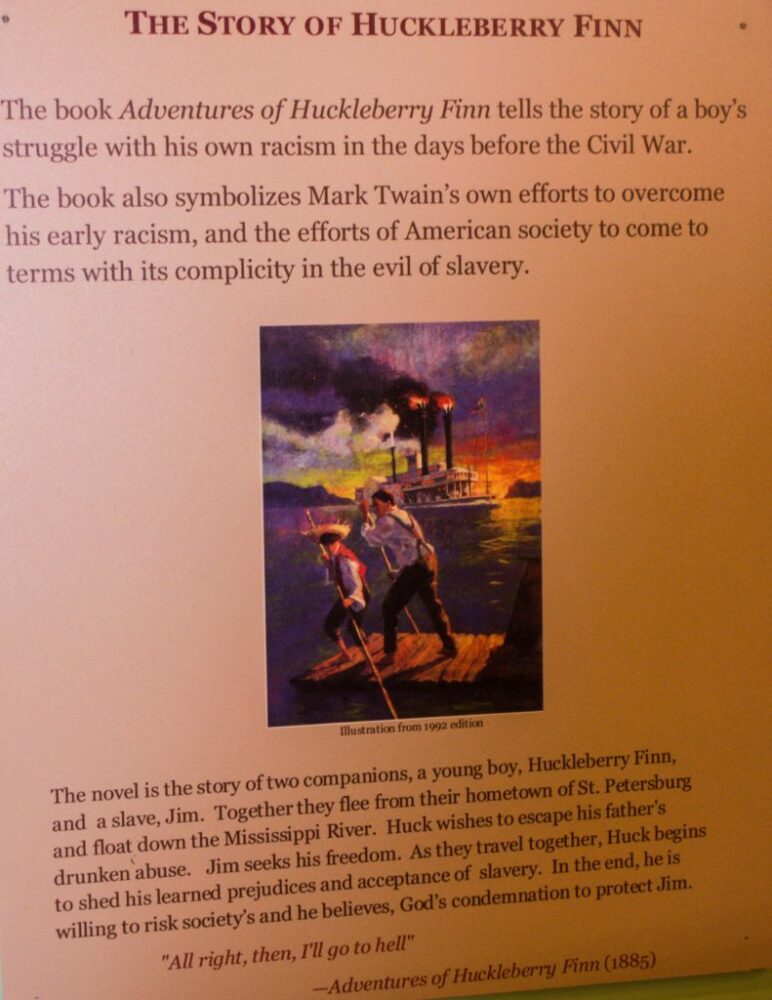 Mark Twain’s father owned slaves when he moved to MO. His father was a lawyer but not a very good one, they say. He sold his slaves to keep up the family. As Mark Twain grew up, he recognized the evils of slave-owning and became extremely anti-slavery and wrote about it in newspapers he wrote for in the day. 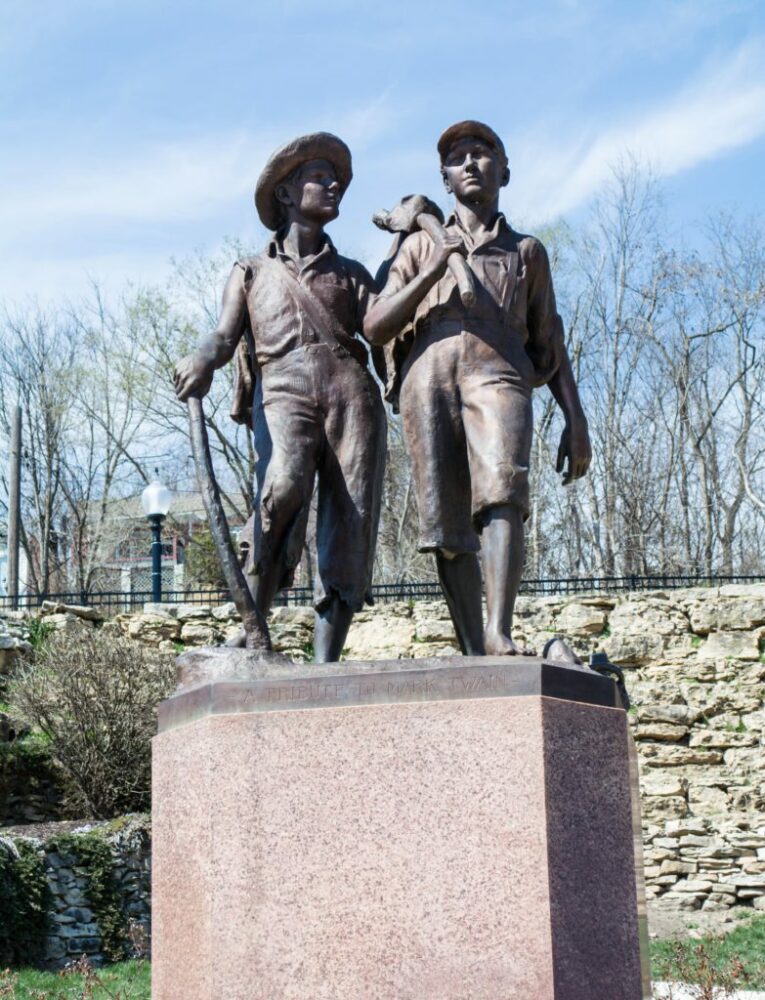 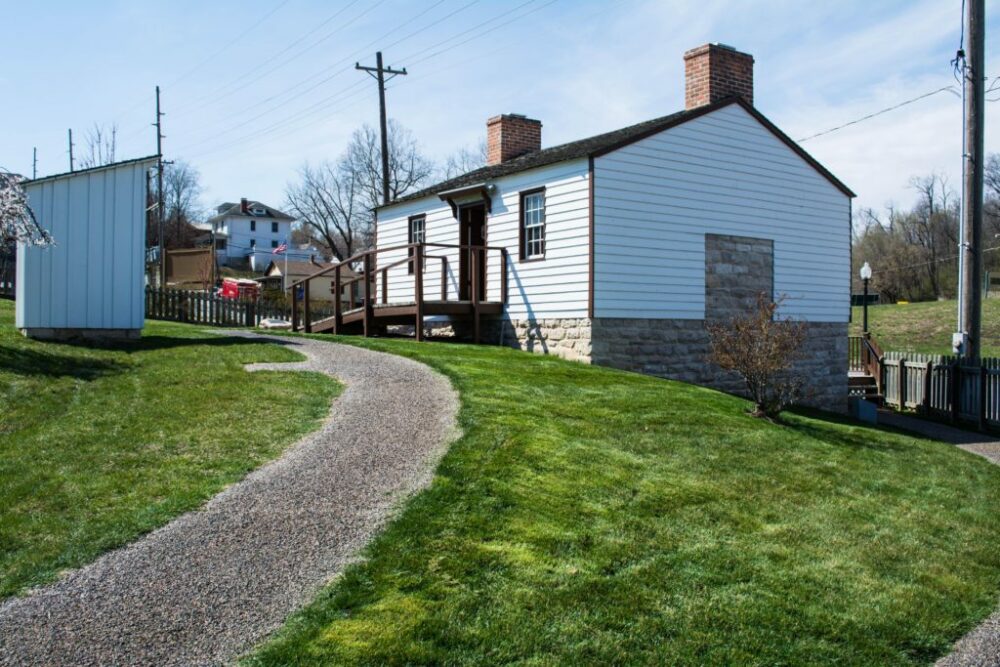 Restoration of Huck Finn’s home. He was also based on a friend from Mark Twain’s early life who had an alcoholic, abusive father and was raised in poverty.

Moving along… Into Iowa 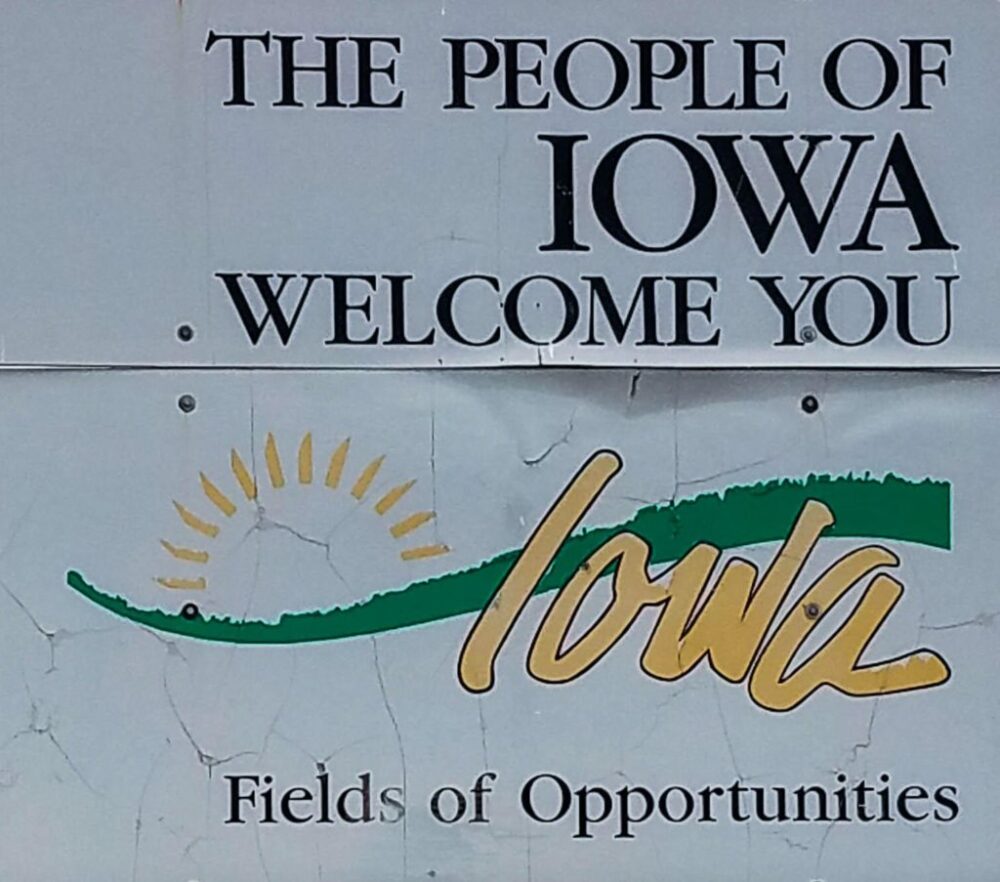 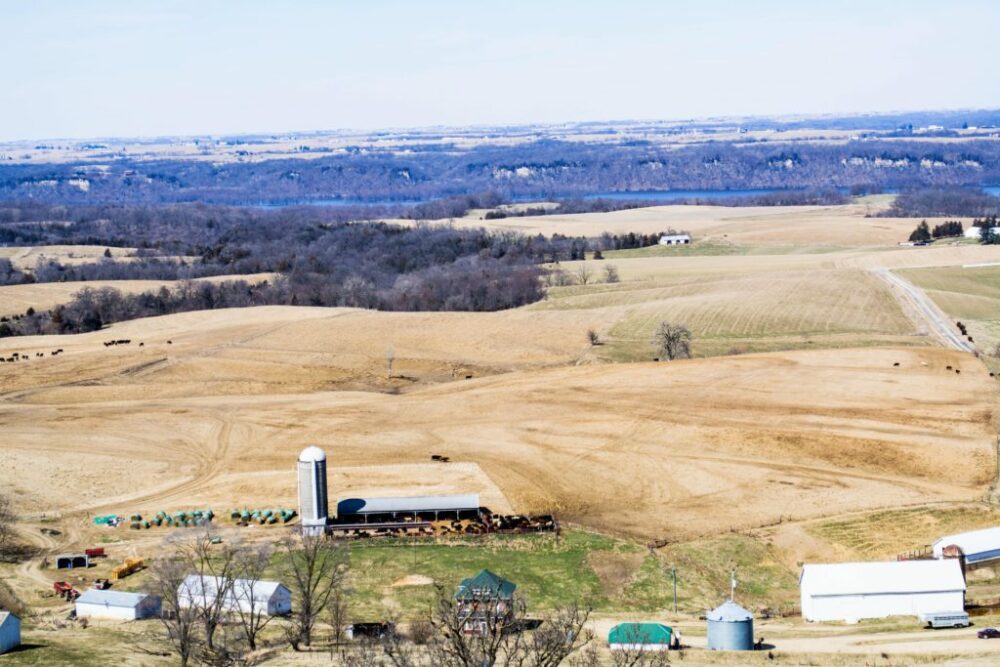 One of the first views of Iowa.

Drove up mostly US Highway 61 and went off where I saw the GRR pull off. Iowa has a lot of road that is right along the river. My first view was Keokuk Iowa which I’d been told is a very depressed town. While it probably is, there are many well kept up homes on the river. And the river front was mostly well kept up. Of course, there continue to be riverfront areas that have been abandoned as shipping ports consolidated. But not like Illinois across the river.

Also drove thru Fort Thompson which has an actual historic fort along the river and a small town with historic areas as well. 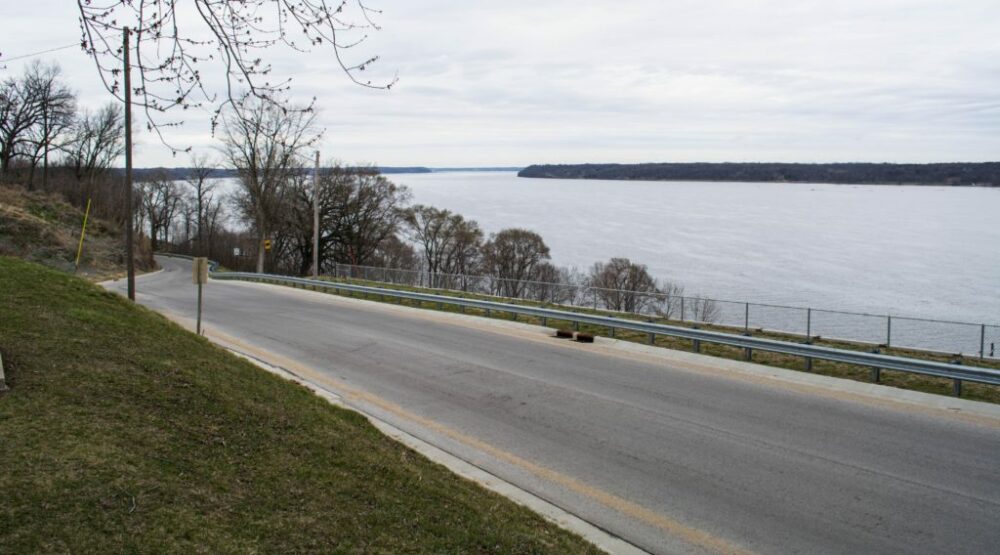 Riverfront in Keokuk IA. No barges this time! 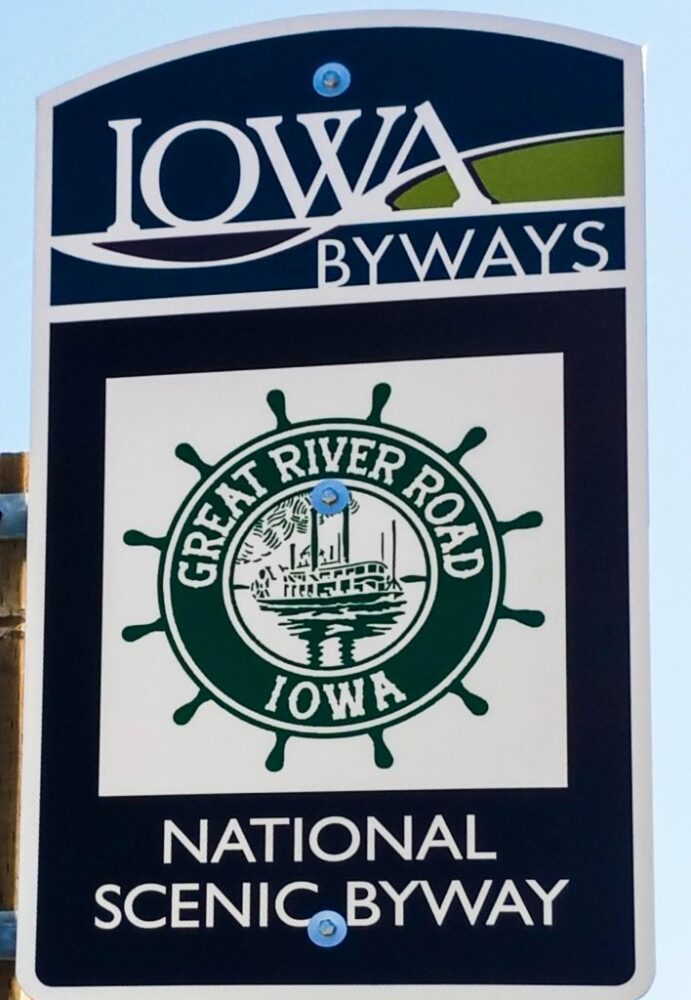 Then I went thru Burlington IA. A Navy friend grew up there so I called him and said “Guess where I am?” I told him and he said “Why would you go THERE??”. Then I told him about my trip and he told me a bit about the town and about Iowa areas south of the Quad Cities. I’m staying in Davenport IA tonight and will likely make it home tomorrow night. If I see things that take up more time than expected, I’ll likely just get home late. Tomorrow is Day 11 of the trip.

Signing off for the night. One more day of adventure before I return to normal life!

Strange Attractions Maine to Alabama and beyond