What becomes more fascinating than a large cave? Mammoth Cave National Park in Kentucky provides a series of fantastic tours. But, there are also some quirky sights within the cave. Or maybe just your interpretation. But you have to look at it differently! By the way, here’s a link to the Overview National Park post.

But falling into the cave isn’t what we need! No, I’m really not; I just wanted to start this out differently! Actually, just getting started. But Mammoth Cave really is a mammoth! Another fact, did you know that Mammoth Cave tops out at more than 420 miles of surveyed passageways? Also, it takes more than one tour to visit all of them! Here’s a link to the National Park Service site for Mammoth Cave.

Significantly, Mammoth Cave earned the title of one of the Seven Natural Wonders of the World. But that depends on which list you consider. Apparently, several organizations make up different lists. In 1972, the National Park System recognized Mammoth Cave as a National Park to preserve its extended caving. But, in 1972, surveyors found a connection to Flint Ridge to the north. Now, it’s officially known as Mammoth-Flint Ridge Cave System. And that’s how it came to be over 420 miles of caves.

By the way, Mammoth Cave got its name due to its size; there have been no findings of the now-extinct Wooly Mammoth! So, let’s get into the quirky looks at Mammoth Cave!

Do you need travel clothes or travel supplies? Check out L.L. Bean for some of what you need! No pressure, but if you do buy something, I will get a commission at no additional charge to you. See my Disclaimer.

Maybe we need to get out again; the rocks look like they are burning! No, that might even be artificial light!

Basically, if people tour the cave, artificial light needs to be used. There aren’t very many natural lights in a cave!

This location is just inside the entrance. This tour turns into a fun outing. There weren’t too many low or very narrow places to walk.

Are we upside down in here?

Presently, it looks like we are upside down! Doesn’t it seem like we should be walking up there in the light?

Instead, we have more artificial light on the ceiling here. The Park does an excellent job of projecting lights that create optical illusions in some places.

Descending deeper into the cave

I’m sure we are going up! But, no, wait a minute. We are still descending. These caves can be deceiving. Touring caves proves to be informative even if there are quirky sights!

Some tours contain only lanterns carried by the guides and visitors over 16 years old. But those tours are in a different part of the cave. Although you see open spaces here, some tours are called “crawling tours.” Because you have to get down on all fours and crawl through small openings!

Are we going up or down? It depends on how you look at it. Actually, we are still descending. This area shows more open spaces and high ceilings in the cave.

A person gets disoriented if not with a group. You certainly don’t want to get down here without a guide (or breadcrumbs!)

Can’t you see the steam rising from the earth’s core? Or maybe if you listen hard enough, you can hear an Australian accent coming from the hole! I’m glad they added a guard rail!

According to the guide, it doesn’t go through the earth, and it’s not a bottomless hole! However, you don’t want to fall into it.

We veer off into a little-used area as we continue through the cave. And find this 700-year-old knight whose job is protecting the Holy Grail. He’s kept alive by the power of the Grail! Oh, wait a minute. I just jumped into Indiana Jones and the Last Crusade!

Actually, it’s just the guide protecting his eyes from the light so he can tell us about this section. And there is more light than it looks like.

Lights behind a mountain range? 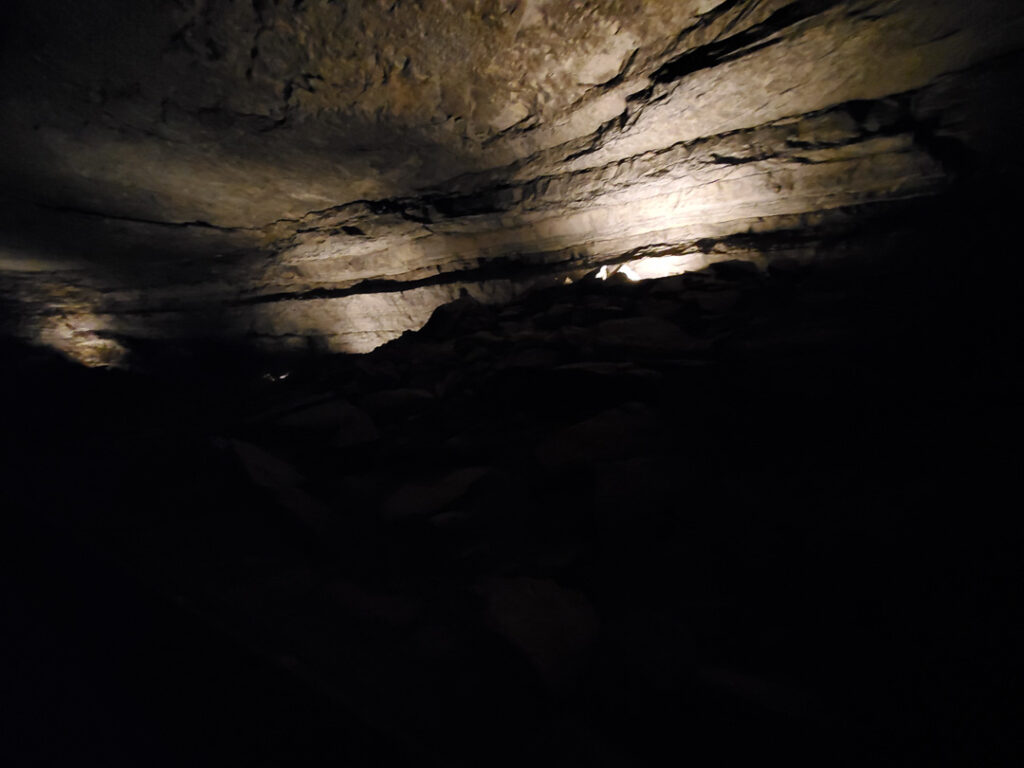 No, just more light behind a ridge rising from the cave floor. Until you can bring a 35-mm with a tripod down here, you will get these types of pictures.

However, it’s a great tour down here underground. And this park has trails and water above ground as well.

End of the underground portion of the tour

This picture is not an optical illusion. But we are headed out of here now. I like the light patterns here. Of course, now it really does feel like we are going out.

I loved the tour and saw lots of sights in the cave. This tour, named the Extended Historic Tour, provides views of several parts representing much of the cave system. There were a few tight spaces to give us a feeling of what that was like.

However, we didn’t have to crawl through any spaces. There are tours where you must do that. On your hands and knees!

Of course, since Mammoth remains a National Park, there are above-ground activities. Currently, there are about seven miles of trails around the visitor center. These trails feature: ridgetops, river views, sinkholes, cave-fed springs, and views of hidden entrances to the area caves. (If they are hidden entrances, how can you see them??)

But the South Side Trails contain another 11 miles of forest trails. And they are great places to see what lives on the surface!

And, there are over 60 miles of “backcountry” trails on the park’s northern side. Some are hiking trails, some are biking trails, and still others are horseback trails. Since it’s a park, both Backcountry and Riverside Camping are also available.

The images above come from the Extended Historic Tour. (That is, the images above the pictures of the outside! The National Park presents many tours of the cave, some change with the seasons.

Although most people don’t consider National Parks quirky, you can if you look at them in the right frame of mind! Since some people love quirky attractions, just try it sometime. Explicitly look for something that doesn’t look like what the guides describe. Or what you are actually seeing and let your mind wander to something else you’ve seen recently. Try it!

So, we come to the end of the Mammoth Cave National Park Quirky Tour! But you will have to make it quirky in your mind!

Indeed, I’ll catch you at the next park! By the way, the next one is Cuyahoga Valley National Park in Ohio. Surprisingly, it’s almost a metropolitan area park as it’s very near Cleveland.

“A Horse with No Name” by America

Written by: Dewey Bunnell
(I don’t know why it reminds me of a cave!)

I love these products! And so does my family!!

(This is an advertisement link. I will get a commission at no cost to you if you purchase.)

Route 66 and return – Final wrap up – Random thoughts and ramblings