Early morning flight. Up at “Oh Dark Thirty” (3:30 AM). MSP to ATL to BWI. Fortunately, the trip was uneventful which is the best way to fly. Hence, we were off on Washington DC Part One. Two flights followed by the MARC train to Union Station in DC. (Maryland Area Regional Commuter).  Besides that, tickets are only $3.50 for seniors! Union Station in DC is a tourist site on its own. However, it is a transportation station that serves MARC, AMTRAK, and VRE (Virginia Railway Express) as well as several bus lines. After Penn Station in New York, it is the second busiest rail station in the US.

Continuing our journey, took an Uber from Union Station to the Courtyard by Marriott near Gallaudet University north of the US Capitol. Asked the driver to find a convenience store for some supplies, which at rush hour in DC was no easy task! (Gave the driver a $30 tip as we took more time than a typical rush hour drive!) (For Uber Drivers reading this, we gave him cash. Didn’t say “I’ll tip you in the app” which very often is similar to “the check is in the mail”.)  As a result, our Washington DC Part One is well underway.

After traveling much of the day, checked into a very good but small room. Because it had a king size bed and a sofa sleeper, maybe it just seems smaller. Again, after a full day, a nap was in order. Then went to the restaurant in the hotel. Not the greatest in the world but we didn’t have to go out. Overall, a good day.  Getting to bed early as we have a White House tour scheduled for 9 AM.

Not going to get political here as the White House is a historical building, and the Washington DC Part One continues. Because there have been changes over the years, the tour is now “self-guided” with Secret Service team members stationed along the way. Consequently, they ensure no one gets out of the designated areas and provide commentary and answer questions about the house. Interestingly, the White House is actually designated as a National Park. 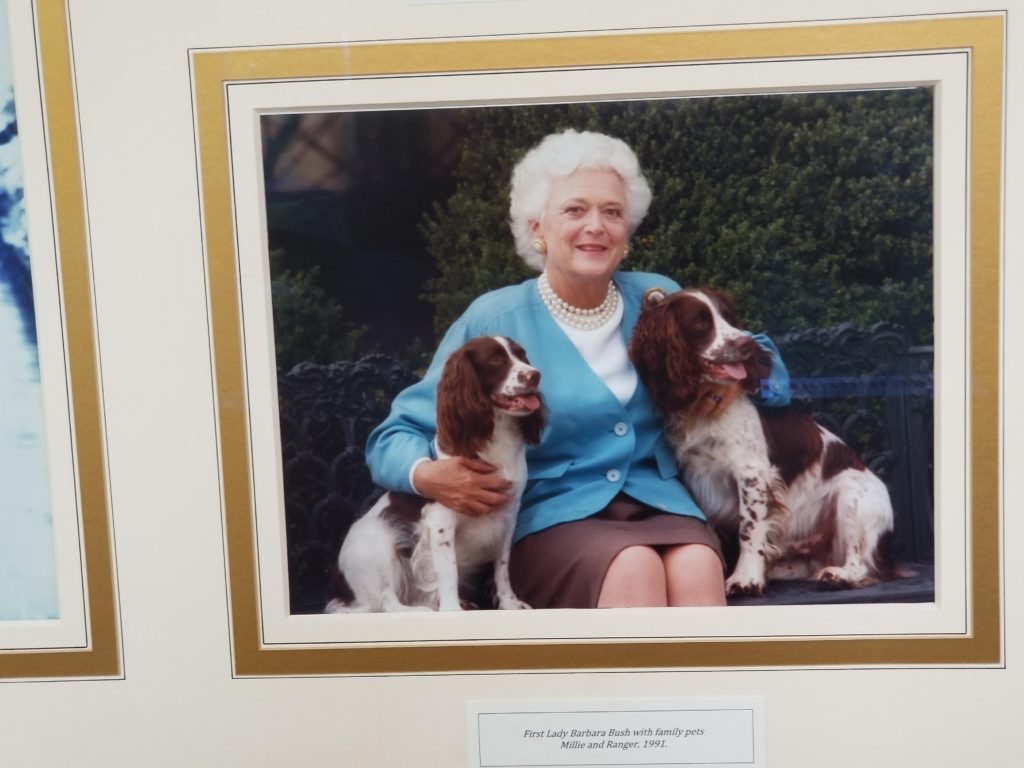 Barbara Bush with the family dogs!

Iconic front view of the White House from Pennsylvania Avenue. Now mostly blocked by barricades and trees.  Just have to see it in an old picture I found on the internet.

I couldn’t do the “Walkby Tourist thing” in the White House as we had to stay with our group. As the Washington DC Part One continues we negotiate to be on our own (link to an explanation). Typically when a museum, park, or other site says how much time I will spend, I usually do it in half the time. This museum says most people spend 4 – 5 hours. In this case, I did make it to 3.5! Here is a link to the museum website.

This museum starts at a fourth level underground where the tour starts with a history dating back to about 1400.  The concourse level (first level below ground) contains the cafeteria, the Oprah Winfrey theatre and a room for special exhibits and events. The ground floor has a few exhibits but is mostly lobby and visitor center.

After leaving the below ground levels, each level is dedicated to specific areas of African-American contributions to American culture.  Level two contains classrooms and areas to explore your family history. The level also contains African-American media arts.

The third level is dedicated to sports and the military. For example, prior to WWII, military units were segregated. With the beginning of WWII, President Roosevelt started the first steps to integrate the armed forces. Finally, the official end of segregation didn’t come until 1948 when President Truman signed an Executive Order fully integrating the military.

Following the military part of the tour, the sports part of the exhibit has many entries from all professional and amateur sports. Muhammad Ali gets more attention than many others both because of his boxing career and his stands on his religion, the military and African Americans’ history of segregation and prejudice in America.

The fourth level is dedicated to African-American art including visual, musical and cultural contributions.

Pictures from the museum

(Due to a large number of visitors, pictures are difficult to take here. I wish to have taken several pictures of Muhammad Ali displays. Certainly represents a large part of the American experience during that time.)

No visit to DC would be complete without seeing the Air and Space Museum (link).  Had to make a quick visit here at the end of the day. Washington DC Part One continues.

Display of spacecraft to Pluto. Link to a website for real-time displays.  (The updates on the website ends with the ending of the mission.)

Almost the end of Washington DC Part One. I wish it had ended there. Unfortunately, I got a bloody nose that wouldn’t stop. Ended up in Emergency at Washington Hospital Center, the largest emergency room in DC. Unfortunately, we were there for nearly six hours.

Then, Washington DC Part One comes to an end.